Rents are on the rise

Housing in San Luis Obispo can be difficult to find, and it's becoming even more difficult to afford. While home prices on the Central Coast continue to slide, rent prices are heading in the opposite direction. 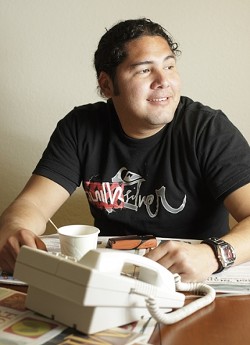 # In 2005, within a couple of days of searching, Cuesta College student Jefri Rios found a place to live that was financially feasible to his $450-per-month budget. Now, he's looking for a new place, and the search for affordable housing in SLO has become a daily grind for Rios. Each morning, before he heads off to school or work, he searches Craigslist, the Cal Poly housing website, local newspaper classified sections--he even combs the streets of SLO on foot in an effort to discover housing within his price range.

So far, things aren't looking too good for Rios--who earns an average of $300 a week working part time in construction while attending school.

"It's been an ongoing struggle," said Rios, 27. "I can't find anything. Landlords are so greedy now."

Numbers from the 2008 San Luis County Economic Outlook seem to reflect his sentiments.

According to the UC Santa Barbara Economic Forecast Project, the price of a studio located in the city of San Luis Obispo jumped nearly 15 percent--$722 to $828--from September 2005 to September 2007. There's anecdotal evidence to suggest the trend has accelerated since.

The forecast data listed the average monthly rent for a three-bedroom rental in SLO at $1,888, but a look through classifieds (this writer has been looking) reveals few if any at that price, with $2,400 a more likely price for three bedrooms.

One local real estate expert says the increasing rent problem is as easy to explain as supply-and-demand.

"Everybody wants to live here [in SLO], but they're not building more housing or apartments," said Tim Banducci, president of property management firm California West Inc. "The city has a limited growth philosophy. Good or bad, that's just the way it is."

That doesn't mean he isn't concerned, however.

Banducci said he expects rents to continue to climb and added that the limited availability of housing in SLO, mixed with skyrocketing rents, is a financially fatal combination forcing people out of town.

"It's less expensive to live in the outlying areas," he said. "I go out Broad Street every day to Arroyo Grande and it's a traffic jam. And that's because all the worker bees are going home."

But the situation is nothing new to Banducci, who's been working in the Central Coast real estate game since 1971.

"Rents were so high in the mid '90s, people were living in their cars," he said. "Rents go up and down, and right now they're going up."

Banducci said he feels that Cal Poly has the biggest impact on the local rental market.

"Students allow us to charge higher rents because they can pay more than what a working couple can afford," he said. "You've got parents who've decided their children are going to college, and they'll pay whatever rents they have to. It skews the rental market, but that's the economic reality of the community."

Another reality is that Cal Poly expects to enroll 500 fewer freshmen next year in anticipation of a tighter budget. With the construction of several new dorms, locals are wondering what effect the new housing will have on the rental market.

"This is coming at a time when we can be responsive in housing as many students as we can," he said. "We'll be twice the size of Templeton. This is definitely a positive."

Allen said that the new on-campus living quarter, Poly Canyon Village, is expected to bring an additional 1,500 beds to the campus area by next fall, and will ultimately house 2,700 students when it's complete in 2009.

"I've never known a landlord to drop rent," Allen said. "In a market like this, renting is one of the few options."

But for many young professionals, however, renting in SLO is becoming less of an option and more of a preference.

"I want to live in SLO," Rios said. "But I just don't know if I can afford to anymore."

Staff Writer Kai Beech is in the market for an affordable three-bedroom in SLO. Screen him at kbeech@newtimesslo.com.