Requiem for a drought: Hear what climate scientists have to say about the potential causes of California's drought

Wherever you stand in the climate change debate, the last few months have provided plenty of anecdotal evidence to support an argument for or against global warming.

Deniers might point to the frigid air freezing the East Coast and Southeast as a clear sign that the planet isn’t warming—you know, because it’s really cold over there.

At the same time, proponents and a majority of climate scientists could use the same bizarre weather conditions as evidence of a climate system being thrown into an erratic state where the East Coast can experience record cold, while West Coast states see one of the worst droughts on record.

Regardless of the politics, it’s becoming increasingly difficult to ignore a single, undeniable fact: This is all kind of weird, isn’t it?

“What most meteorologists would say is, ‘Climate is what you expect; weather’s what you get,’” said David Lea, a professor in the Department of Earth Sciences at University of California, Santa Barbara.

What no climate scientist will say—or can say—is whether California’s drought is the result of a warming climate and if this is one of the first signs that global warming is rearing its ugly head.

Dr. William L. Preston is a professor of geography at Cal Poly, and, like many people who spoke to New Times for this story, he was reluctant to blame the ongoing drought entirely on global warming just yet.

“However, the models, supported by observations, indicate that traditionally dryer areas on Earth will experience more aridity over the long term and that short-term weather will feature greater extremes in categories such as heat and intensity of precipitation,” Preston said in an email. “In terms of climate classification, the Central Coast is a relatively dry region. Therefore, in the context of comprehensive global climate change, there is reasonable likelihood that the Central Coast will experience enduring climate change accompanied by more extreme weather events.”

The science of attribution is one of the trickier aspects of climate science. Scientists continue to pore over data for extreme weather events, like the 2010 Russian heat wave and Hurricane Sandy. And though the book is still open on what’s causing California’s record-low precipitation, the most likely culprits are high pressure and temperature patterns in the Pacific Ocean.

There was another cold mode from the mid ’40s through the mid ’70s, Lea said, which switched into a warm mode that peaked with the ’98 El Niño event. The worry is that such cold modes can last 20 to 30 years.

But there are, more than likely, multiple factors behind the drought.

In 2004 and 2005, Dr. Jacob O. Sewall, assistant professor of geology and environmental science at Kutztown University of Pennsylvania, published two studies in which he predicted that declining Arctic sea ice would create a “blocking pattern” off the West Coast, leading to 30 percent less rainfall in the western United States. And now, some of those predictions are hitting close to the mark.

“Given these similarities, I don’t think we can discount warming climate and declining Arctic sea ice as culprits in the [California] drought,” Sewall said in an email to New Times.

In fact, no one interviewed for this story discounted global warming as a possible factor of the drought, nor could they directly attribute it to a change in the local climate. It will take decades, not years, before scientists can really parse the data and look for trends. But that doesn’t mean there aren’t suspicions.

In addition to the ongoing cold mode of the Pacific, warming Arctic temperatures have been implicated in throwing the jet stream out of whack, creating large spikes that push cold farther south on the East Coast while simultaneously blocking storms from reaching the West Coast.

“I think attribution is a complicated issue, and we have to be careful with these statements,” said Leila Carvalho, an associate professor in the UCSB Department of Geography. “There is no doubt that the anthropogenic [influenced by humans] warming will cause a change in the climate of the region, but we cannot say that the drought we are experiencing is due to climate change.”

There could, however, be many events all coming together to suck California dry. The cold mode in the Pacific, combined with more extreme jet stream wave patterns, may all be wrapped into larger trends that won’t be fully understood for decades.

“What is happening this winter is something that’s perhaps indicating a climate shift,” Carvalho said. “… We are now in a situation where we have the perfect recipe for drought.” 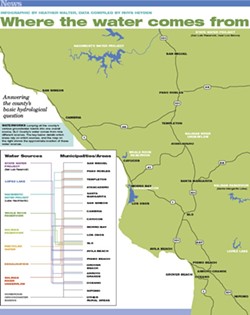