Rescue money: SLO County and its cities are getting $85 million in federal stimulus funds, but there are rules on how to spend it

Cover Image From Depositphotos UNCLE SAM'S DOLLARS The American Rescue Plan allocated "once-in-a-generation" funds to SLO County, which now has to figure out how to spend it.

The $1.9 trillion federal stimulus bill, signed into law on March 11, allocated $130 billion in direct aid to local governments, and SLO County and its seven cities are in line to receive $85 million.

Andrew Hackleman, vice president of regional economic think tank REACH Central Coast, called the relief funds "the type of opportunity for investment that won't come up again in our lifetimes more than likely."

"Really, this is a once-in-a-generation opportunity to invest in the community," Hackleman said.

But for the communities receiving the funds, the decisions ahead are tricky. As SLO County 4th District Supervisor Lynn Compton put it, "it's not just an open door" to the funds. Questions remain about how exactly the money can be used, and what kind of process should determine where the investments get made.

"We're not clear on it yet. We're getting clarification on how we can spend the money," Compton told New Times. "I'm already getting a lot of people approaching me. Diablo Canyon is very generous with the nonprofits and they've lost that money [due to the plant's decommissioning]. Now they're looking to us."

Discussions at the county level about the Rescue Plan funds are already underway. On March 16, the Board of Supervisors voted 3-2 to form a subcommittee—made up of 1st District Supervisor John Peschong and 2nd District Supervisor Bruce Gibson—to help develop spending recommendations.

The dissenters in the vote—Compton and 5th District Supervisor Debbie Arnold—argued that the process should involve all five supervisors. Compton said that $54.9 million was simply "too much money" to go to a subcommittee.

"I think it should be done in complete open session," she said.

Gibson told New Times that the intent of the subcommittee will be primarily to "frame the discussion" for the full board "to make sure we understand what we can expect out of this."

"I think some people think it's more of a free-for-all than it actually is," Gibson said. "A lot of people think of this as a piñata that's going to shower candy on us here, but it does have some rules attached to it."

The Rescue Plan set five broad parameters for how cities and counties can use the funds. The money can: cover COVID-19 emergency response expenses; provide aid to households, small businesses, nonprofits, and industries like tourism and hospitality; pay "premium" wages to essential employees; restore government services impacted by lost revenue during the pandemic; and go toward investments in water, sewer, and broadband infrastructure.

Local officials across the country are seeking clarification from the Biden administration about what those parameters mean in practice, Gibson said.

"We need to resolve some of those," he said. "We figure it will be the latter part of April when we'll have some more details about that." 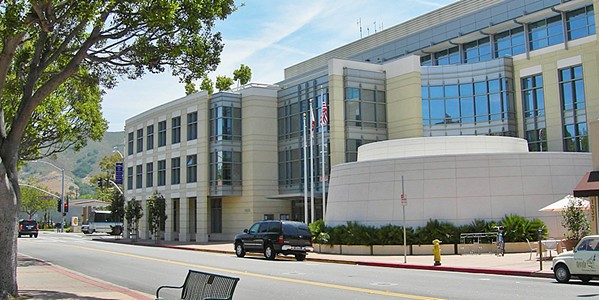 Gibson said that "nothing is off the table at this point" as far as how the money could be spent. He cited getting direct aid to unincorporated county residents and businesses, making investments in broadband, boosting support for child care, and stabilizing the county budget. Compton added to the list supporting workforce housing development, creating business and nonprofit grant programs, investing in water infrastructure, and helping struggling county departments like Parks and Recreation.

"I don't expect it all to go to one thing by any means," Compton said. "I want to hear all interesting options and uses."

While the Board of Supervisors expects to discuss a range of spending options, a chunk of the Rescue Plan funds will likely go toward simply recovering the revenues and services lost during the pandemic.

That appears to be the city of SLO's approach. SLO City Manger Derek Johnson said that the city anticipates having an $8.9 million revenue deficit going into 2021-22 due to pandemic-related declines in sales tax, transient occupancy tax, and parks and recreation fees. That dollar value happens to be exactly how much stimulus funding the city was allotted in the Rescue Plan.

"The funding will therefore assist in reinstating frozen positions, provide funding for homelessness and housing, and invest in capital projects that had to be defunded due to the revenue shortfall," Johnson said in a statement.

But economic advocates, like Hackleman of REACH, see a bigger opportunity in the stimulus funding than balancing budgets. In partnership with SLO County, REACH is close to finishing a report that he said attempts to measure the local economic impact of the pandemic and identify strategies for moving forward.

Hackleman said the report could help inform SLO County on where it should invest its stimulus dollars for maximum effect.

"What we don't want to do is spend this money. We want invest it," he said.

Gibson echoed that sentiment, and noted that the county is at a crossroads over the next few years as it faces the fallout of COVID-19, the impending closure of Diablo Canyon Power Plant, and the looming transition away from off-roading at Oceano Dunes.

"We need to coalesce these things. That requires vision," Gibson said. "We need to articulate a vision for what we want this county to accomplish. I think we can build it back better than what it was." Δ