Editor's note: Previous versions of this article incorrectly stated that Avila Ranch land has not yet been annexed into the city of SLO.

After 32 years running The Equine Center veterinary clinic on Davenport Creek Road just south of San Luis Obispo city limits, Jim Waldsmith knows the area's handful of rural roads like the back of his hand.

The most frequently traversed of them is Buckley Road, a 3-mile-long, two-lane road that runs from Highway 227 at the SLO County Regional Airport to Vachell Lane near South Higuera Street, winding through mostly open space and ag or ranch land—including near Waldsmith's clinic and home. 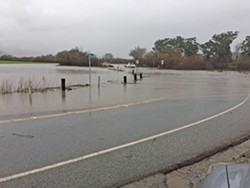 Having taken countless car trips down it with horse trailers and other heavy equipment in tow, Waldsmith has one conclusion about Buckley Road.

"This road is dangerous now," Waldsmith told New Times. "People with trucks and trailers really have a difficult time getting through this road."

Buckley Road is relatively narrow—about 28 feet wide, according to SLO County officials—with some abrupt twists and turns, and gets hit with seasonal flooding at a creek crossover. Waldsmith and his neighbors say they have reason to believe traffic safety in the area is about to a get a lot worse before it gets better.

On Sept. 19, the SLO City Council will make a final decision on Avila Ranch, a 720-unit housing project proposed along Buckley Road, near the street's westerly end at Vachell Lane. SLO annexed the 150-acre site into the city from the county—though the majority of Buckley Road going east remains unincorporated.

Residents in the area fear the consequences. What's historically been a relatively isolated country road peppered with trucks, tractors, and trailers could soon be a major east-to-west corridor for city residents, commuters, tourists, and shoppers.

Locals like Waldsmith don't believe the city and county are giving Buckley Road the attention it requires to prevent future car and bicycle collisions.

"Traffic is often characterized as just a nuisance," Waldsmith said. "Traffic as a nuisance is not as big a concern as traffic as a danger or a threat. That's the situation we find ourselves in."

About 30 nearby residents recently met with city and county officials to express their concerns and talk solutions. Part of the problem from a logistical standpoint is the jurisdictional overlap between the city, county, and developer. Another is how to generate the funds.

The Avila Ranch developer, Andy Mangano, is expected to fund the South Higuera Street connection, a new roundabout at Buckley and Highway 227, and the widening of Buckley along the frontage of the development and at the Davenport Creek Road intersection.

But SLO County will need to "fill in the gaps" on the road, according to county Deputy Director of Public Works Dave Flynn. He said the first step is to do a "corridor study" of Buckley Road, which will chart the course of future improvements.

"We need the big plan," Flynn said. "It's going to take time to be able to widen the road. Money comes in little chunks. It never comes all at once."

Area residents are worried that the fixes won't come soon enough. They're pushing the city to require that Buckley Road see thorough improvements before a single unit of Avila Ranch is occupied.

While California Highway Patrol accident statistics on Buckley Road couldn't be obtained by New Times before press time, Flynn said the road currently has a "below average collision rate."

Neighboring resident Paul Rys said relying on that metric given the future development is like playing Russian roulette.

"They go by the number of fatalities before they make improvements," Rys said. "We don't want to be the first ones." Δ