Resigned Public Works director was 'called creepy by most staff'

The former San Luis Obispo County Public Works director was described by department staff as being "a harasser," aggressive and scary, and at times sexually inappropriate with female employees. 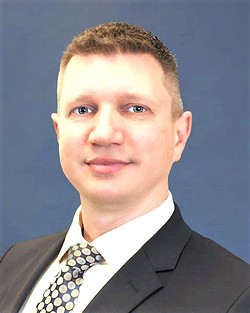 Internal complaints about Daniel "Colt" Esenwein, who resigned as director on May 5, detail how county staff members struggled with their boss's "cussing and yelling," "brutal situations where staff gets 'interrogated and humiliated,'" and "flirtatious" behavior.

Following a 17-day stint on paid administrative leave, Esenwein resigned. He earned more than $285,000 in total pay during his roughly one year at the helm.

"The county looked into concerns raised by staff, and he resigned shortly thereafter," County Administrative Officer Wade Horton told New Times in an email. "Our community expects public servant leaders to model professionalism and treat others with respect. We are dedicated to working together as a team to move forward."

The written complaints against Esenwein—partially redacted to protect identities—were described as summarizing several employees' experiences. They outlined a range of concerns about Esenwein's behavior, leadership, and communication style.

In one meeting, Esenwein "talked about 'bending over and taking it,' 'grabbing your ankles,' and other sexual descriptors to emphasize how he does business," according to the complaint.

The complaint also stated, "People [are] very unhappy with Colt and that he is 'stalking/flirting' with young, pretty staff. ... People are borderline getting asked out on dates."

"He is very flirtatious with ... female [redacted] employees and he ignores everyone else," it continued. "He will yell at them across the office about cooking dinner together and other after work activities."

Staff described Esenwein as having "a very harsh, loud, and interrogative style" and that his "cussing and yelling" was "very disruptive."

"Colt is a harasser who is either clueless or knows where the line is and stays right at it," the complaint read.

While most of the staff feedback was negative, some reported that the issues had "generally gotten better" and that "people felt it fixable with communication."

In a statement to New Times, Esenwein called the accusations in the complaint "half truths and fabrications ... crafted to fit a certain narrative."

"I am deeply saddened that anyone would think those things about me," Esenwein said. "I try very hard to treat everyone with respect."