Battery-powered camping lanterns and their packaging are strewn across a plastic folding table in the Department of Social Services Building on Grand Avenue in Arroyo Grande. There hasn’t been power all day, and it’s almost time for the makeshift warming shelter to open its doors to the line of about 20 people standing outside.

“Normally we would have the coffee going and the hot water going but we don’t have [power],” Michael Byrd says as he puts D-cell batteries into one of the lanterns. “Meals are brought in, and they’ll have a hot meal.”

Byrd is the president of the 5 Cities Homeless Coalition board of directors and a regular volunteer for this warming shelter: “This is a working board,” he says with a laugh. While the coalition’s overarching goal is to get people to change their lives through connecting them with services or helping them find permanent homes, Byrd says running an emergency shelter is the humane thing to do.

“We’re saving lives here,” he says. Other volunteers are moving chairs out of the 20-by-30-foot conference room, bringing in sleeping bags, or setting up for dinner. There’s blue tape on the floor every 2 feet—that’s each person’s allocated sleeping space—and tables pushed together in the center of the room for dinner. It’s been windy and pouring down rain all day.

“At least from our perspective on the ground, we are in crisis. That’s a good word for it,” Byrd says. “The demand for our services is tremendous.”

Tonight (Feb. 17) will mark the 52nd night the 5 Cities Homeless Coalition has opened the emergency warming shelter since Nov. 1, 2016, due to predictions of rain or temperatures dropping below 40 degrees. From Jan. 1 to March 31 of 2016, the shelter opened up 11 nights, serving an average of 10 or 11 people per night, with a high of 20 one evening. That winter, the coalition served 231 shelter nights. One shelter night is defined as shelter provided to one person for one night. This winter, according to the coalition’s executive director, Janna Nichols, with 30 volunteers and some paid staff, the shelter has served an average of 25 people per night, with a high of 42 one night (people spilled out from the conference room and into the hallway to sleep that night) and 1,280 shelter nights.

There is a crew of “regulars” who have utilized the respite from inclement weather over the last four years the shelter has been operating, Nichols said, but this year the emergency shelter has served 117 new faces.

Yes, the storms are bigger than they’ve been in years and the creeks are running high. But also, a couple of well-established homeless camps were cleared out in the last year. Both were in Grover Beach.

“People are not as entrenched as before,” Nichols said.

Providing shelter comes with a price, though. In mid-February Nichols sent letters to each of the 5 Cities and SLO County asking for money. It’s the first time the coalition has reached out, but the nonprofit’s still waiting for a response from local governments.

New Life Community Church donated $20,000 to the nonprofit last year, which the coalition thought would get it through the year and then some, as last year it only spent $5,000 on shelter services. Nichols said costs have gone up for multiple reasons, including increased demand, laundry services to clean the sleeping bags, and the landlord’s new requirement of having paid staff stay overnight. 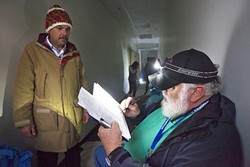 “We haven’t asked the county or cities for money because we honestly didn’t think we were going to need it,” Nichols said. “Right now we’re running on a deficit.”

“It only gives the government flexibility in utilizing public buildings, but there aren’t a lot of public facilities,” she said. “I appreciate the symbolism, but unless you’ve got a government-owned facility you want to use, then why go through the exercise?”

Even after the crisis was declared, there wasn’t an increase in the number of emergency homeless shelters that opened over the course of last winter. The North Coast from Los Osos to San Simeon is still lacking a warming shelter, meaning folks need to find some way of traveling to San Luis Obispo if they want a roof between them and the rain. And even then, they could be turned away.

At least two of the people who signed in at the shelter in Arroyo Grande on Feb. 17 had traveled down from San Luis Obispo. Tony Day said he had been kicked out of the emergency shelter run at the Prado Day Center, and he rode his bicycle from SLO to AG seeking a respite from the rain. Dave Trout said he was sick of getting camping tickets in San Luis Obispo, so he left for the Five Cities.

“They’re good people, man,” Trout said of the people who volunteer at the warming shelter.

Nichols does believe local government entities need to coalesce to tackle the issue of homelessness, which is why she’s advocating for the South County Homeless Coalition. It would be a board that includes members from local governments, nonprofits, and stakeholders to come to agreements on things like collaborating to find a bigger building for the warming shelter.

The Arroyo Grande City Council was the first to vote to participate on that coalition, which is contingent upon other cities doing the same. City Councilmember and warming shelter volunteer Kristen Barneich believes the other local governments will follow suit.

“I think we should help out. We’re supposed to represent all of those citizens … and we know because of the homeless point-in-time count, homeless citizens do live in Arroyo Grande,” Barneich said. “The community’s really come together—the citizens—to help. Our citizens are helping, so I feel like [the City Council] should help.”