Restaurant romance: The couple that just opened Sidewalk Café got their start serving up famous clam chowder near the beach

Step into the Sidewalk Café Monday and Wednesday through Friday from 8 a.m. to 4 p.m., and Saturday and Sunday from 8 a.m. to 5 p.m. Visit the café on Facebook to check out its menu. You can find the café in the Arroyo Grande Village at 130 W. Branch St., suite A.

On one rainy day in 2004—not so different from the ones we've had lately—a high school senior stepped into Splash Café in Pismo Beach.

"I was so nervous, it was my first job ever," Kacey Collins said. "He was in the kitchen cooking."

The "he" that she's referring to is Brett Collins. He grew up in Arroyo Grande, and she grew up in San Luis Obispo. He was just a young surfer who would roll into work with his surfboard, after riding the waves in Pismo. And he's now her husband of 11 years. They've had three kids together since that first day on the job and recently realized a dream they've been talking about for years. After purchasing the old Alphy's Broiler in the Arroyo Grande Village, the Collinses opened Sidewalk Café in January.

"It's a total love story," Kacey said. "We worked together probably for a year when we first started dating."

Together, Brett and Kacey helped open Splash Café's second location, the artisan bakery on Monterey Street in San Luis Obispo. Together, they opened and closed shop, pushed through the busy times, and sometimes worked double shifts.

Eventually Kacey moved on to other pursuits, going to school for a job in the medical field and then becoming a stay-at-home mom for the last four years. Brett was a manager at Splash for about 20 years, until the third Splash Café location, near the Downtown Center Cinemas in San Luis Obispo, recently closed. Kacey said they witnessed Splash Café owners Joanne and Ross Currie work through the paces of running and growing their business.

"We really pride ourselves on where we come from," Kacey said. "We watched and were trained at Splash, looking at the decisions that they made and watching as they grew."

They have the same training, so the Collinses look at running a restaurant with a similar outlook, Kacey said. Plus, Brett's brother Brian Collins, who owns Ember in Arroyo Grande, also got his start at Splash. Between Brian and the Curries, Kacey said they have a lot of support and felt comfortable taking the plunge into restaurant ownership.

"It's kind of just everything that we've been able to see. We know that we can do busy. We know how to train. We know who to call," Kacey said. "We knew that we could do it ... . We totally felt confident that this is our time, and we have everything that we need to be successful."

So when longtime Village hot spot Alphy's Broiler went up for sale, the Collinses felt the time was right. They had only been to the favorite lunch spot a couple of times before hearing about the sale. But when the Collinses got wind that it was on the market, they staked out the place.

"We asked people to go for us and take out to-go orders and try out all of the food," Kacey said. "We were jogging by two times a day to see when the busy times were."

The Collinses made an offer and didn't hear back. They almost gave up, Kacey said. But then, finally, everything lined up and they bought all of it. The kitchen equipment, the recipes, the tables and chairs, the patio furniture. All of it.

If you walk into Sidewalk Café, you can even find the same ol' people behind the counter. That's partly why the Collinses were able to get the restaurant open so quickly. It's been open for several weeks now and serving breakfasts, sandwiches, salads, and tacos. 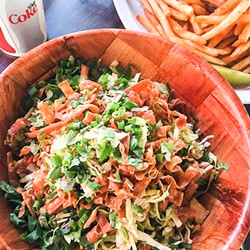 Kacey said they wanted to make sure the spot, which has been in the community since 2005, had the same familiar feel. That way the people who frequented it for all those years, would frequent it again and be comfortable there. And she also knew that their restaurant would have decent sized portions of food made fresh, from scratch, at an affordable price.

"I don't want to be that person who tries to overexert their personality and be the small plate that's overpriced," she said. "That's definitely been a trend on the Central Coast."

Sidewalk's menu is similar to Alphy's because the Collinses liked what they saw and tasted, but they definitely put their own twist on things.

They added a fryer into the mix, so you can get tater tots or onion rings with that order now! You can also get some fried zucchini if you're feeling festive. With the right little nudge you can even give in to your gluttonous tendencies and order your fried favorites loaded with cheese, bacon, chipotle sauce, and green onions. (I'll for sure take some tots with that.)

"We realized that everything that they do was also what we wanted to do," Kacey said. "They have a really awesome barbecue recipe. So we put that on a lot of things, but we brought in our own chipotle, and we knew that they would mix well together."

Coleslaw is mixed to order.

The Cali-style tacos are made with a fresh citrus salsa and jicama baja slaw—topped with chipotle sauce, of course.

The chowder is made from a special recipe on loan from the Collinses' friends over at Splash.

On a rainy, cold day, the hot Reuben sando is Kacey's favorite.

For Brett, though, it's the fire burger: bacon, grilled jalepenos, lettuce, tomato, onion ring, and that barbecue/chipotle sauce.

Even though things are still new at the Sidewalk Café, Kacey said they've been pleasantly surprised with the response.

"It's actually a really big community, a really tight-knit community at that," she said. "And they keep coming back and trying new things, talking about the menu." Δ