Restaurants throughout SLO County took to social media to rejoice after California Gov. Gavin Newsom announced on Jan. 25 he would be lifting the regional stay-at-home order that went into effect in early December 2020. 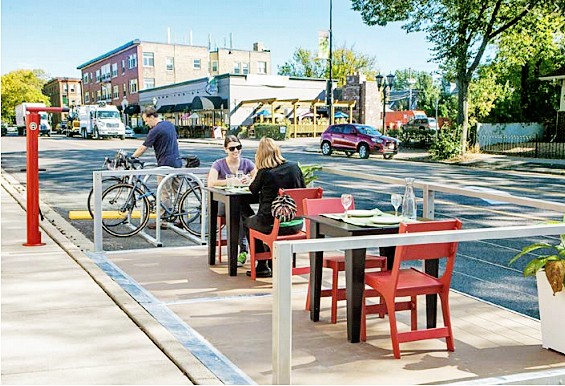 On Jan. 26, Rooster Creek Tavern in Arroyo Grande posted on Instagram, "No more plastic cups! Tomorrow we are back to full outdoor service. Glassware, plates, and silverware included with your dining experience!"

Prior to the announcement, several local restaurants were in the hot seat with the Department of Alcoholic Beverage Control (ABC) for violating state health orders. No citations had been issued as of Jan. 26, however ABC Public Information Officer John Carr said the department had three pending cases in SLO County involving violations of health orders.

"We are not naming the locations at this time since the cases are pending. ABC had approximately 50 open investigations last week," Carr said on Jan. 26. "We constantly review cases and do have agents out in the field to follow up."

Similar to local government municipalities and law enforcement agencies, which took an educational approach with noncompliant businesses and only cited egregious violators, Carr said ABC prefers voluntary compliance with health orders. However, he said the department would take enforcement action at businesses that refuse to comply.

In SLO County, he said, ABC officials witnessed indoor dining, outdoor dining, or both at the 50-plus businesses that were under investigation.

In recent weeks, Pappy McGregor's in Paso Robles posted on Facebook about a warning about in-person dining it got from ABC. New Times reached out to Pappy's for further comment but hadn't heard back before press time.

In the post, Pappy McGregor's said it has tried as long as possible to operate in a socially distant and safe manner "while still giving our guests the experience they expect at Pappy McGregor's, without jeopardizing our licenses."

Statewide, ABC licenses somewhere from 45,000 to 50,000 restaurants and bars and has made more than 163,065 compliance-check visits. ABC has issued more than 200 misdemeanor citations statewide, Carr said.

ABC is sensitive to the challenges facing businesses during the pandemic, Carr said, which is why the department quickly adapted some of its rules, such as allowing sales of alcoholic beverages to-go. The department also approved more than 9,500 temporary catering authorizations to allow ABC-licensed businesses to expand their footprint outside so they can stay open and serve patrons safely.

The department, Carr said, has noticed higher compliance with health orders now that businesses have the option to serve diners outdoors again. Due to the rules, some eateries encountered disgruntled customers who didn't want to abide by the health orders.

On Jan. 23, Taste Craft Eatery posted security camera footage on Instagram showing a frustrated customer shoving an employee, the employee backing away from the customer, and the customer angrily walking out of the San Luis Obispo location.

The post said the restaurant and its staff are not political or security guards but rather restaurant people.

"We all jump through hoops every day to stay safe and to keep our staff employed so they can survive and pay their bills. We close inside, we close outside, we spend tens of thousands on parklets and equipment and heaters and what not. We nonstop clean and sanitize and stay late and arrive early to make adjustments. We endure the one-star baseless reviews and the yelling. One minute we are horrible for being open at all ... and then the next we are horrible for not fighting back more and thumbing our nose. We are all so very frustrated. ALL OF US. This behavior towards one of our staff ... is beyond comprehension and will not be tolerated. Today is a new day. As always ... we choose love. If you can't ... then go away," the post read.

The altercation occurred because the customer wanted to sit inside the establishment with three others, which went against the stay-at-home orders, and Taste wouldn't allow it.

Carr said if a business receives a citation for a health order violation from ABC, the citation is a misdemeanor crime for the business owner. A district attorney would decide whether to prosecute the misdemeanor. ABC reviews the violations and decides whether to pursue disciplinary action against the licenses for violating health orders.

Business owners, Carr said, have a right to request a hearing before an administrative judge to present their case.