Return of the funky purple napkins

Two men from Wales were traveling through the city of San Luis Obispo when they decided to exit 101 and ask someone on the street, “Where’s the best place to get lunch?” That stranger, surely a local, responded with this atypical suggestion: “The Tamale Shop in Santa Maria at the corner of Betteravia and South Blosser roads.” In a space that was formerly a tamale factory that only sold take-out, the owner recently began sharing his professional kitchen with one of the Central Coast’s most beloved chefs, Rick Manson. The Welshmen drove another 30 minutes south to find the Tamale Shop and told Manson how they came to find him—pretty funny considering the fact that many locals still don’t realize the charismatic Chef Rick is once again cooking up the irresistible foods his many followers crave. 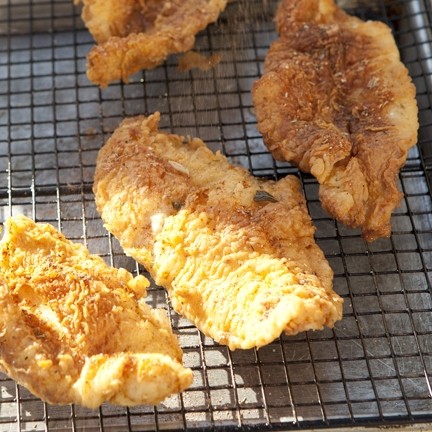 Chef Rick’s was a favorite in greater Santa Maria for more than two decades. And many of his repeat customers weren’t local, but they made Chef Rick’s a destination whenever they came anywhere near it. He’s sated the appetites of Martha Stewart, Robert Mondavi, Deepak Chopra, President Jimmy Carter, Robin Ventura, David Crosby, and Tom Petty. That made Manson a rockstar himself, and I count myself among his most devoted fans. Manson’s soulful cuisine is well worth finding. Now that locals are discovering where he’s landed, they’ll drop everything to drive over to Santa Maria to satisfy their cravings.

I’d drive over strictly for the Georgia sweet potato muffins; I love those spicy, subtle, sweet treats that much. But I love everything Chef Rick creates, which recently motivated me to visit alone for a taste. The new menu is actually the old menu from Chef Rick’s Ultimately Fine Foods when it was on South Bradley Road. Dr. Double E’s grilled fish tacos ($13) were on my mind when I arrived, and they were superb. The generously topped fresh corn tortillas featured a combination of white fish filet, medium prawns, and scallops, with tangy chipotle slaw, jicama guacamole, and salsa ranchera. Another side dish held the black beans next to the shrimp dirty rice, topped with a blend of shredded jack and cheddar cheese. A basket held familiar breads: cheddar jalapeno roll, the Georgia sweet potato muffin, and a new one, “Rick’s hot buns.”

That’s one helluva a lot of groceries for $13, but this is no ordinary meal. As I tasted each of his signature dishes (so familiar to my palate, I could pick them out in a blind tasting), I thought, “Welcome back, beloved friend. Welcome back.” The only big difference is the lack of brilliantly colored artwork that always adorned Chef Rick’s original restaurant. Yet two women from Brooklyn told Manson the place reminded them of Brooklyn, a hole in the wall where you find the best local foods. When I’m eating Chef Rick’s satisfying foods, I don’t concern myself with the ambiance.

Most readers know Manson did a short stint at another popular Orcutt restaurant, and it just wasn’t the right fit for him. But he’s found his groove in this funky eatery, which he rented because he needed a licensed kitchen for his popular catering service. “I started offering take-out, but it just wasn’t getting people in,” he said candidly, although he’s always busy sending food out to the big business firms around him at that busy Santa Maria intersection. “Then I added a few tables and people started coming in.” Hardly surprising—Chef Rick’s was sorely missed.

If you’re still craving dinner at Chef Rick’s, you can get your wish Friday nights from 5 to 8 p.m. at Costa De Oro tasting room in Santa Maria, owned by Gary Burk. The winemaker is Manson’s brother-in-law, and the music-loving duo creates some irresistible events, perfect for date-night, and there’s no cover charge. Burk’s excellent yet reasonably priced wines are available by the glass, bottle, or growler. Manson prepares his awesome “up-tempo, American cooking, a blend of Southern Louisiana, Southwest, and Southern California”—only the price is cheap at $12 for a big plate of really delicious foods. On a recent Friday, guests totally enjoyed his crispy “Cadillac” catfish (named for the popular Cadillac Angels band performing that night, it’s cooked to order rather than that steam-table stuff that’s been sitting around) with couscous jambalaya, black-eyed-pea slaw, Rick’s hot buns, and watermelon and feta salad.

“We are using the same farmers, the same top drawer distributors we have over the past two decades. It’s the daily specials that keep us dynamic,” Manson said.

Chef Rick’s only accepts cash (no lira or cc’s), but you can phone orders in advance. And he’s only open for lunch, Monday through Friday from 11 a.m. to 2 p.m. with very limited seating, and only bottled water or soda beverages at this point. Stay in touch with the uber-talented chef on Facebook: Search Chef Rick’s, where you’ll see his constantly updated menus and daily specials. Or you can join his e-mail list to get the menus by sending him your address at rick@chefricks.com.

“One of my great loves is feeding the Central Coast community, and we’re continually refining this new concept,” the great chef said sincerely. “Now people can touch Chef Rick again through the funky Tamale Shop.” ∆