Revisionist history: Not all historic SLO buildings are necessarily historic 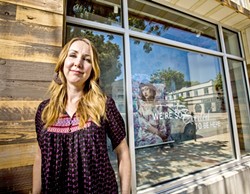 The inspiration for the idea came from Anthropologie.

Ariel Shannon, owner of Bluebird Salon, said she wanted to do something to improve the look of her new location, previously a nondescript stucco building on Marsh Street in downtown San Luis Obispo. Inspired by the reclaimed-wood façades on various Anthropologie boutiques, Shannon set out in April to begin reworking the drab look of her building. Bluebird was previously located just down the block, but was forced to relocate in February when that building came due for a retrofit.

With a new location, Shannon began creating a new façade using redwood boards reclaimed from an old fence. But with about two days left before the project was finished, she was approached by city officials.

“I wasn’t aware that you needed a permit to make modifications to a façade downtown,” she said.

The work was merely cosmetic, and though city officials haven’t asked Shannon to take down the paneling, she was asked to apply for a permit and told that her first stop would be before the city’s Cultural Heritage Committee (CHC).

“I was told that, ‘Yes, I would need to apply,’ and more than likely I would be told ‘no’ because I was modifying a building on the historical contributing list,” she said.

The permit fee is about $1,000, which was also the budget for the entire project, Shannon said.

She has since paid the fee and put in her application, but to rally support she launched a petition on change.org, going on the assumption that the CHC would recommend her project for denial unless she could make a good case for the new look.

“I just want to emphasize I appreciate how the city wants to work with me,” she said. “Our petition wasn’t to ruffle any feathers down there; it was just to show support for our design.”

As of press time, the petition had about 700 supporters.

Though the CHC is simply an advisory body, meaning its recommendations are nonbinding as projects work through the city’s various planning bodies, it’s the first stop for any project involving anything historic in SLO. The problem with Bluebird’s new location, as Shannon saw it, was that the building didn’t seem particularly historical. For one, she said it had sat vacant for about two years before she moved in. Additionally, its façade was changed under an earlier retrofit and, as she said, “it’s kind of an ugly building.”

Regardless, the building is on the city’s contributing properties list of historic resources, which is one of the classifications city planners use to preserve SLO’s historic buildings. Buildings on the list are placed under more scrutiny than those that aren’t, and are required to go before the CHC, which is tasked with preserving the city’s historical resources. Other buildings on the master list of historic resources are held to an even higher standard and even allow property owners to apply for tax breaks under the Mills Act.

But as Shannon continued to work with city officials, she found that her building wasn’t really all that historical and likely should no longer be on the list.

“We don’t even know why it’s on the historic list,” Senior Planner Phil Dunsmore said of Bluebird, adding that there is “very little documentation” to back up the original decision to put it there.

Most of the buildings on that list were added in the late 1980s after SLO officials directed funds toward historic surveys to catalogue properties for preservation. Buildings constructed before 1950 were eligible for the historic label, but Dunsmore said the list is likely due for an update.

Some buildings on the contributing properties list may no longer warrant such a designation, while other properties that weren’t previously considered historical may be due for another look. There are neighborhoods surrounding the existing historic railroad district that have never been surveyed for historical significance, for example, as well as the Sunset Drive-In. At the time of the surveys in the ’80s, the drive-in was only a few decades old and less of a novelty, but if surveyed today it would likely be considered historically significant.

Several CHC members who spoke with New Times agreed that new surveys are needed. But those surveys cost money, which hasn’t been appropriated, and require additional support beyond the committee members, who are all volunteers.

While there’s always the potential that the standards of review placed on historical buildings can make it harder for property owners to make modifications, CHC members who spoke with New Times said there haven’t been many conflicts.

“They really do provide the fabric, the background, of what makes our city distinct, interesting, unique in a lot of ways,” said Bob Pavlik, the CHC chair.

A review of agendas going back to January 2013 showed that CHC staff often made recommendations in favor of property owners who asked to modify historic buildings.

“Really, the idea is we want to continue to make buildings useful,” Dunsmore said. “If buildings aren’t useful, then they’re going to deteriorate and go away.”

Shannon said her chances of getting a permit have improved with support from the petition as well as a few city officials.

“The prognosis is definitely a lot more optimistic for us at this point,” she said.