When it comes to funding public education, California lost its mojo long ago.

It started in 1971, when the California Supreme Court ordered the state to put a system in place to equalize district funding. California picked one, but inadequately funded it. The bottom dropped out in 1978 when Proposition 13 capped property tax rates and froze land values. This caused tax revenues to slowly decline when compared to inflation. The budget crisis of 2008-11 provided the final straw.

Once the gold standard in per student funding, California now ranks second-to-last in the nation, according to Education Week’s 2013 annual report. That’s below Mississippi, Alabama, and the other punch-line states.

For San Luis Obispo County school districts, the process felt like a slow kind of suffocation.

“With the budget cuts, we’ve been decimated,” said Chris Adams, superintendent of one of SLO County’s wealthier districts in Coast Unified. “That’s the reality around the state.”

A belated response came this summer from Sacramento. In probably his biggest undertaking since assuming office, Gov. Jerry Brown included an overhaul of state public school funding in his 2013 budget package. The Local Control Funding Formula (LCFF) replaces a convoluted system of basic and program-specific categorical funding with a slightly simpler regime that distributes money based on certain needs.

The governor’s plan seeks to close the massive achievement gap between rich and poor districts by providing more money for three types of students: English learners, foster kids, and the children of impoverished families. It costs districts more money to educate these high-needs kids who, incidentally, make up a surprisingly large proportion of public school enrollment statewide.

SLO County superintendent Julian Crocker numbers among the new system’s cautious supporters. Crocker described LCFF as a bold step with the potential to close the achievement gap, but repeatedly warned it will take years to restore many districts to pre-recession funding levels.

Crocker’s office oversees 10 school districts. Implementation of the LCFF will impact each and every one differently depending on the district’s standing under the old system. Seven of the 10 receive property tax receipts insufficient to sustain the district and, therefore, rely on state funding. All of these stand to gradually benefit from LCFF.

On paper, the local winner under the new system is San Miguel Joint Union Elementary. Brown’s estimates show the school district would stand to receive $9,928 per student—almost $2,000 more than it gets currently—at full LCFF implementation. Yet San Miguel won’t get that in 2014 because full implementation would cost the state an additional $18 billion per year, according to a July 29 Legislative Analyst’s Office report. 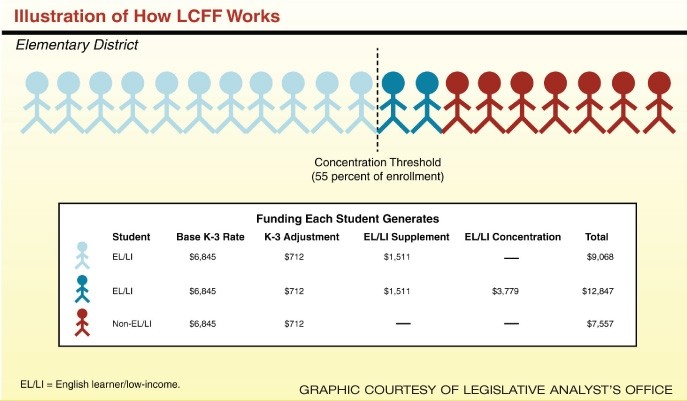 “I’m pleased that it looks like we’re going to get additional monies. We’ve had three years of furloughs and cutbacks,” Dubost said. “I hope that people don’t assume that just adding more money is going to automatically result in increased performance. It’s how you spend it.”

The new system looks to benefit San Miguel because one of the district’s two campuses—Lillian Larsen—contains about 90 percent poor or English learning students. LCFF benefits escalate in proportion to the concentration of high-needs kids.

The formula starts with a base grant of around $7,000 per student, depending on grade level. Then it adds on $1,511 more for each English learner, foster youth, or child receiving state-subsidized lunches. Districts with a makeup of more than 55 percent of those kids receive another $3,779 for each high-needs student above the threshold. Finally, if the district keeps K-3 class-size averages below 24 students, it gets another $712 per child across the board.

Nevertheless, the cash infusion won’t come instantly. When implementation of the LCFF begins, a gap will form between what the formula says a district should get and what the state actually can afford to pay. If San Miguel’s initial gap is $2,000, but California can only afford to fill 15 percent of funding gaps statewide in a single year, the district would get $300 more than it got under the last year of the old system.

“The phase-in process is totally dependent on the government and how the economy goes,” San Miguel business manager Sherrie Castellanos said.

On the other side of California’s financial disparity sits the basic aid districts, so called because local property tax assessments supply their basic revenue needs. These districts still collect categorical funding, and also felt the pain of recent cuts to those state programs. The cluster includes San Luis Coastal Unified, Coast Unified, and Cayucos Elementary.

Gov. Brown promised at the outset to do no harm to the basic aid districts. In fact, his staff said, the LCFF openly contemplates eventually folding those basic aid districts that would do better under the LCFF into the system. San Luis Coastal might eventually prove an example because of the looming possibility of a Diablo Canyon nuclear power plant shutdown.

“Once Diablo’s gone, we’re the poorest,” Prater said. “We’ve been living on pins and needles—always with a shadow of a worry.”

Coast Unified, the district that serves the strange case of Cambria, will remain basic aid. Scarce local water supplies prompted state and local governments to stop new construction in Cambria in 2001. This decision affected Coast Unified in two ways: It increased the value of properties already developed, which increased property tax revenue, and dropped enrollment by preventing the flow of young families into the community.

Ask your kid what happens when you increase the numerator while decreasing the denominator. She’ll tell you Coast Unified gets more money to spend on each student. That doesn’t mean the district has more money overall, but just that Brown’s plan won’t help it monetarily.

“We have 6,000 pieces of property with 6,000 water meters and that’s it,” Coast Unified superintendent Chris Adams said. “They can’t really freeze our property taxes, so we come out in a better position than we would under the Local Control Funding Formula.”

Adams expects Coast Unified to do fine for several years, but can’t predict the long-term impacts. Brown’s new system remains just a framework, and the state Department of Education still must pass regulations to fill in all the gaps. The uncertainty is a bit frustrating for basic aid district leaders who always knew where they stood financially.

“I kind of liked knowing what we were going to make,” Adams said.

Brown’s plan will still affect basic aid schools substantially on the spending front. The local control aspect of the Local Control Funding Formula eliminates state earmarks for dozens of special programs. Under the LCFF, district boards can spend their money the way they want, with certain limitations. LCFF funds provided for high-needs kids should probably go toward high-needs programs, but specific spending rules don’t exist yet.

In addition to Lillian Larsen, Dubost oversees Cappy Culver Elementary, a significantly more Caucasian school located near Lake Nacimiento. Depending on how the regulations turn out, that school may see little benefit from the LCFF surplus, which probably won’t excite many Culver parents. In that regard, Dubost sees San Miguel as a microcosm for the entire state.

Another challenge that district leaders will face as they adapt to life under the new system involves marketing spending changes to parents. The LCFF will allow districts to mush special programs that now receive categorical state funding into the general fold, if they dare.

“Everyone thinks local control is a good idea,” Crocker said, “but don’t take away special funding for my child’s program.”

Special education makes for the special exception because the vast majority of those requirements are federal. By Crocker’s estimates, it costs a district about $40,000 to educate an autistic child, for example. The federal government pays about 15 percent of that, but sets all the rules and makes all the standards.

“Many of those needs are exceptional,” Crocker said.

ALSO IN THIS SERIES: