San Luis Obispo is a very bike-friendly community, which is great for those who want to either save money or save the environment by not driving. For some, however, even a bicycle is too much of an investment, so they are forced to walk everywhere or rely on public transportation. Fortunately, a new program called RideWell is here to remedy that problem.

RideWell was started by Bike SLO County, a nonprofit with only four staff members. They run the Bike Kitchen in downtown SLO, as well as multiple other bicycle-centric programs, and were able to create RideWell with the help of some grant money set aside by SLO County for community-based organizations. 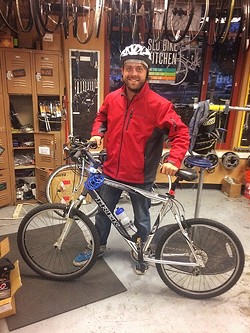 “Our goal is to get more people riding,” said Steve Akers, communications director and cycling instructor for Bike SLO County.

RideWell gives free bikes to people in need, and each bike comes with a helmet, a lock, a light, and a four-hour course on road safety. Two hours of the course is spent in a classroom, while the other two hours are practical lessons.

“Giving someone a bike and not teaching them road safety isn’t really responsible,” Akers said. “It’s road skills 101. We get them familiar with the most common accidents. … They need exposure to it so they know to say, ‘OK, I won’t do that.’”

RideWell bikes come from community donations and the efforts of another Bike SLO County program called Earn a Bike. Earn a Bike teaches young people about bicycle maintenance and repair, and participants get to choose a bike to keep at the end of the six-week program. Some of the bikes they work on become RideWell bikes, and often they will be the ones to ride the RideWell bikes to their recipients.

“These DIY skills, it’s not just bikes, it can be anything,” Akers said. “They’re learning that it can be reused, that it doesn’t have to go in a landfill. They’re doing something with their own two hands and making a difference in someone’s life.”

Community involvement is of vital importance to the RideWell program. Their grant for the 2015-2016 fiscal year only funded 10 bikes, but they gave away 12. This year, their goal is to get a grant for 30 bikes, but they will probably end up giving away 50, according to Akers. There are countless ways to help besides financially; for example, because the Bike Kitchen is such a small space, one person allowed the use of their offsite location for bike storage.

“When I say donations, of course I mean money, but I also mean bikes,” Akers said. “Also sweat equity—volunteers.”

These donations and volunteers, as well as the grant money, allow RideWell not only to give the bikes away, but also everything that comes with them. According to Akers, giving away locks with the bikes was particularly important, as many of the bikes would get stolen, since those who can’t afford bicycles often can’t afford locks either.

RideWell makes sure to keep in contact with recipients even after they’ve received their bikes. All bicycles require occasional maintenance, and since RideWell recipients are usually people who wouldn’t have the funds for such maintenance, the program gives them simple services such as flat tire fixes free of charge. Akers said that being able to do all of this is exciting, particularly because of the support they receive.

“We’re pretty thrilled,” he said. “It’s great when there’s something we as an organization are able to do and it’s like, ‘Let’s do it.’ But it’s a whole other thing when the community comes back and is like, ‘We want to do this too.’”

Though many RideWell recipients are referred to the program by organizations such as RISE or CAPSLO, anyone can apply. The application is available online at bikeslocounty.org/programs/ridewell, but you can also apply in person by stopping by the Bike Kitchen at 860 Pacific St., suite 105, in SLO between noon and 5 p.m. Thursday through Sunday.

Parrish Family Vineyard recently donated .64 acres of its vineyard, including a section of Adelaida Creek and its surrounding area, to San Luis Obispo County. The vineyard is currently working with the Upper Salinas-Las Tablas Resource Conservation District and the county’s Department of Environmental Programs to restore the area’s habitat. The project is expected to help recharge the aquifer and replenish area wells with naturally captured rainfall.