Steadying his bike over bumpy, fresh-fallen Connecticut snow, San Luis Obispo-native Lance Haidet clutches his handlebars as he approaches a sharp left turn. He takes a perfect angle into it, exiting with a burst of acceleration.

Fifty yards down the course, Lance screeches to a halt at the base of a hill. He jumps off his bike, picks it up, and carries it to the top. At the summit, he mounts it again and barrels down the other side toward the finish line.

This is cyclocross in action, and Lance, 19, is one of the best in the country.

Each well-played twist and turn around Hartford’s snow-covered course on Jan. 8 made the difference for Lance, as he narrowly won first place at USA Cycling’s Under 23 Cyclocross National Championships. Lance rode steadily with technical precision (which is his style) and watched the cyclers ahead of him falter. He surged into the lead during the final lap, and finally crossed the finish line with his right arm raised in the air, grinning like a kid in a candy shop.

“Going into the race, I knew the conditions of snow and ice were going to result in a lot of little mistakes and possibly even some crashes,” Lance wrote to New Times via email. “I tried to limit the number of mistakes I made. That being said, I still had to give it just about all I had on the last couple of laps in order to take the lead.”

Winning that national championship was a pinnacle moment in Lance’s young cycling career, no doubt—a culmination of thousands of hours of determined training throughout his childhood.

But it likely won’t be his last triumphant moment. For the next few weeks, Lance is in Europe representing the U.S. at cyclocross competitions in Belgium and the Netherlands. 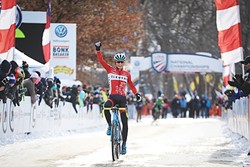 “Being that cyclocross is dominated by the European countries, the Americans are definitely some of the underdogs, but we will try to make things interesting for sure,” he said.

Lance’s remarkable journey from being just another SLO kid with a dirt-biking hobby to becoming a world-class professional didn’t happen overnight, and it didn’t all happen here in SLO County. Sean and JaAnn Haidet, Lance’s parents, raised him in SLO until the third grade, when the family moved to Bend, Ore., in 2007.

Before the move, Sean’s own passion for cycling had already started rubbing off on his son. Relocating to the Pacific Northwest—where cycling is a much more prominent part of the sports culture—set the stage for Lance’s eventual path to professional cycling.

“By the time we moved up there, he was getting to that age and size where he was more interested in doing bigger rides,” Sean told New Times. “I was at races almost every weekend myself. At first I was just dragging him along and he thought it was cool.”

Oregon offered every iteration of cycling you could imagine, including mountain biking, road biking, and cyclocross. Rather unexpectedly, cyclocross became a top attraction for the father and son.

“I didn’t even do cyclocross in SLO, but in the Pacific Northwest, it’s huge,” Sean said. “When Lance was about 10 or 11 he started entering into some of the races. He loved it, and he got really good at it.”

Lance’s budding interest in cyclocross kicked into another gear when in 2010, the USA Cycling National Championship races came to Bend. Lance decided to sign up for the junior race, and he was thrilled when he finished fifth. 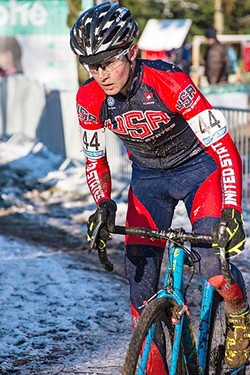 Training for cyclocross isn’t quite like training for traditional road cycling. The courses are notoriously uneven and narrow—even hazardous. In the cycling world, it’s a high-impact sport that requires a unique set of physical attributes.

“The training is pretty brutal,” Sean said. “You’re doing a ton of riding and a ton of running. It takes amazing amount of core strength just because you’re always in weird positions. You’re running sideways carrying your bike up some weird thing. You’re always slipping on the ground. You can’t be incredibly fragile, but you also don’t want to be big and heavy.”

While that might make the sport sound dangerous, as a parent, Sean said he greatly preferred it to the other cycling options.

“I think, honestly, cyclocross is awesome for kids,” Sean said. “You’re not seeing your son or daughter in the wild unknown on some 20-mile loop mountain bike course where you don’t know where they’re at. And it’s not road racing, where they’re out on the concrete with traffic. Cyclocross is in a controlled environment. If Lance gets hurt—if something happens, you’re there.”

Before long, Lance’s passionate commitment to cyclocross started paying off in race results. He won three cyclocross state championships in his early teen years. As a result, attention from USA Cycling coaches started coming his way. That path reached its apex on Jan. 8 with his national championship in Hartford, Conn.

“Winning nationals has been a goal of mine for some time now, so it is pretty awesome to have finally checked that box off,” Lance said.

In addition to an opportunity to showcase his talents on a world stage, Lance’s trip to Belgium is also a return to the sport’s place of origin. Professional road cyclers in Brussels conceived of cyclocross initially as an informal and fun way to train during the winter offseason. 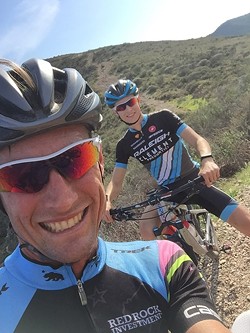 “Literally, Tour De France guys started doing cyclocross in Europe as kind of like cross training,” Sean explained. “Mostly it was because of the weather conditions during the winter time. There’s a ton of rain and sometimes snow. It evolved into its own sport. It was fun and guys were into it. It kind of evolved from that point.”

That background helps explain cyclocross’ unique look. The competitors are wearing gear that looks a lot like road cycling gear. Racers are riding what look like road bikes—but with thicker tires—often in adverse weather conditions over dirt/mud or snow.

Cyclocross also became popular in the U.S., but on the West Coast it’s been relatively contained to the Pacific Northwest. When the Haidets moved back to SLO about a year ago, Sean wondered if Lance would’ve ever discovered cyclocross if they’d stayed. Despite SLO County’s great cycling trails, cyclocross has a much lower profile here than in Oregon.

“Without going somewhere else, it probably never would’ve been found, only because you wouldn’t really even know about it,” Sean said.

“That’s one thing that I hope would change,” Sean said.

Lance is attending Cuesta College, which allows him flexibility to pursue a mechanical engineering degree while still maintaining his budding cycling career. During the spring and summer, Lance also does road cycling at a professional level.

“If I had to choose right now, I would have to say I like cyclocross better, simply because it is more fun,” Lance said. “Racing cyclocross resembles the type of fun riding you do as a kid—ripping around on the pavement and grass, then shooting off into the sand or dirt and doing sweet jumps and skids. It’s surprisingly fun.”