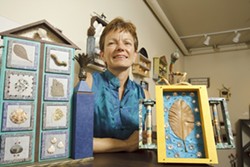 Sheryl Collmer calls them altars, but the artist admits there’s not any overtly religious significance in the word as applied to her work.

“I tend to think in terms of things being gifts, and the ocean is a gift,” she said. “Things that wash up are treasures.”

An altar is where sacrifice happens, where sacrament is received, where vows are made. It’s where the supernatural communes with the natural, where the mundane is elevated to divine. An altar is a holy space, and one definition of “holy” is simply “set apart.”

The cobbled-together visual odes to beaches on either side of the United States do have a holy feel to them, in that sense. Collmer collects the overlooked jetsam of the natural and man-made worlds and transforms it, elevates it into something startlingly beautiful. She combs debris piles at the nearby El Capitan, plucks shells from the surf (mostly on the East Coast, where there’s more than broken sand dollars), and delights in discovering a sun-bleached this or that.

Her Moonstone Beach contains, in part, a pile of shards of windshield glass she once found on the side of the road. She can’t help but pick up such stuff. She’s drawn to bottlecaps and odd bits of plastic, unwilling to step over an eye-catching piece of trash because she figures it’s going to come in handy at some point. 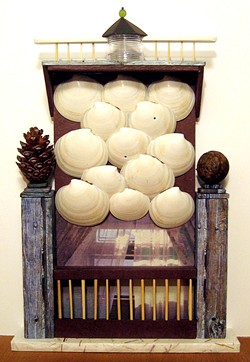 “I think that might be an orange,” she said, pointing to a lumpy brown sphere in Avila Bay, “like a dried-up little kumquat.”

She takes these set-apart objects, made holy by thoughtless litterbugs or the whims of wind and waves, and arranges them in niches and alcoves of her own design. Many of the finished works feature photos she took, printed on paper she made.

The daytime CPA lays claim to four degrees (accounting and fine art for undergrad, a master’s in business and finance, and a master’s in theology) and has studied bookbinding and papermaking. She obviously has an eye for detail, which ran counter to the education she was getting in the late ’80s and early ’90s, when people were “painting on eight-foot canvases with snow-shovel-sized brushes.”

Originally from Texas, Collmer came to visit Los Osos for a half-a-year break, but realized she didn’t want to leave. She worked out a remote-work situation with her employer, settled in San Luis Obispo, and is now looking back at almost eight years on the Central Coast.

She hasn’t always maximized her time here, however. She explained that a couple years ago, she realized she rarely ever visited the beaches that were now so close to her front door. It was practically criminal, she said, so she tasked herself with going to the beach every day.

The altar project started with those sandy excursions. As she began amassing odds and ends—though never from state beaches, which don’t allow for collecting—she also began sketching. Then, she began sewing, folding, stacking, gluing, painting, and balancing her sketches into the third dimension.

Collmer doesn’t limit herself to only using objects from one beach in a particular altar; she more aims to capture the spirit or essence of the place.

Avila Bay, for instance, bears a photo of a gauzy curtain billowing in a breeze. White clam shells overlap like feathers or shingles. Maybe wind chimes. The box is topped with something like a glass jar, evoking a lighthouse. The overall feel is bright, airy, ethereal.

Oceano Dunes is dominated by five bulbous kelp ends, looming over round vials of sand like ghosts of the Dunites. Each dried-out sea vegetable sports a dangling blue wire, from which hangs a stone like a stilled pendulum. Time is standing still amid the sandy masses that have swallowed everything from Hollywood hubris to an entire counter-culture commune.

Beads feature prominently in many of her pieces. In Pismo Beach, small, white dots hang scattered across blue paper into which Collmer sewed an image of a yellow biplane. The rice-like specks conjure clouds against an azure sky, as well as swarms of sand flies.

Collmer adds beads and such as ornamentation, something to remind viewers that the eucalyptus leaves and other detritus are deserving of a frame.

“That leaf is not really that beautiful,” she said. “But it is.”

Sun worshipers, wine lovers, art fans, and curious onlookers alike can make the pilgrimage to Morovino Winery to see the beauty of the beach altars firsthand; more than a dozen of them hang on walls and sit on ledges at the tasting room, welcoming the faithful and skeptical alike.

Executive Editor Ryan Miller collects stuff he finds, too, but he doesn’t make anything beautiful out of it. Offer to drop by with a hot-glue gun at rmiller@newtimesslo.com.