Ringo Starr and his All Starr Band play Oct. 2 at Vina Robles Amphitheatre

I was told I’d have between five and seven minutes to interview Ringo Starr last Thursday, and right on time, my phone rang at 11:40 a.m. and a female voice said, “Are you ready for Ringo?”

Yes, I was ready.

In case you didn’t know, Ringo Starr was born Richard Starkey, and I had to sheepishly admit to him that it’s always been my running joke that Ringo is my Uncle Richie.

“I’m an only child, and after the Beatles I suddenly found long lost cousins coming out of the woodwork,” Ringo said in that great accent.

I also had to admit that ever since I had seen him in the 1981 comedy Caveman when I was 19, I was envious of both his music and acting careers, not to mention his lovely wife Barbara Bach, a Bond girl who had appeared in The Spy Who Loved Me.

“I’m sure it hasn’t always been perfect, but from the outside looking in, you seem to be living a charmed life,” I said.

“Well, I’m living a great life and I have a woman who loves me and I love her, and she’s still as beautiful as ever,” Ringo said.

“I’m sure you’ve been asked every question under the sun, so I hope my questions don’t make you groan or offend you with their lack of originality,” I said. “Rolling Stone named you the fifth greatest drummer of all time, and though you’ve been inducted in the Rock and Roll Hall of Fame as a Beatle back in 1988, this year you were re-inducted for your solo career—putting you in a very elite group. Only 21 performers have been inducted more than once. What do these accolades mean to you personally?”

“I’ve got to tell you it was a surprise to me,” Ringo said. “Paul McCartney called and told me they wanted to induct me again and asked, ‘Will you accept?’ And I said, ‘Well, who’s going to induct me?’ And he said, ‘I am.’ And he did and it was a great night. We played together and just had a beautiful time, and I was hanging out with people I usually don’t get a chance to hang out with. I met Joan Jett, which was a thrill. And Joe Walsh came along, and he’s about the best guitarist in Christendom. As for Rolling Stone, only fifth?”

This next question was hard to ask, especially since I knew he wasn’t keen on talking about the Beatles, but I had to: “Upon the Beatles breakup, you were sort of voted least likely to succeed, and yet your solo career has been incredible with critically acclaimed albums and hit singles, and you’re also the only former Beatle to sustain an acting career beyond the band’s ’60s movies, and then there’s your photography career. Is there some pleasure in proving your naysayers wrong?”

“I wasn’t out there to prove anything,” Ringo said. “I do what I do, but I was shocked to find that my album at the time, Ringo, was the best selling album of the four of us. But it’s not like I was thinking, ‘I’ll show them.’ I’m not that sort of person, carrying on in a darkened room, brooding. If people enjoy what I do, I’m thrilled.”

“Wow, you really are all about peace and love. That’s who you are, isn’t it?” I asked.

“It really is,” Ringo said. “That sentiment was so strong to me in the ’60s, and I just sort of started promoting it on the All Starrs tours, and it became a part of me and a great part. I’ve actually been criticized for being too much peace and love. ‘Ah, we’re tired of all that peace and love.’ Can you imagine?”

For those not completely versed in Beatle lore, Ringo first met the Beatles, who at the time had Pete Best on drums, during a show in Hamburg, Germany, when he was playing with Rory Storm and the Hurricanes. That serendipitous meeting led to an invitation for him to replace Best.

“Your time is up,” the female voice who first called intoned.

“What do you think would have become of you if that chance meeting in Hamburg had never occurred?” I asked.

“It’s impossible to say,” Ringo said. “At that time, friends couldn’t believe what I was doing. ‘You’re gonna leave Rory?’ Who knows what might have happened. What if I hadn’t left the furniture factory? What if I’d immigrated to Texas to be closer to Lightnin’ Hopkins? I can’t say, but thank you, brother! I’ve got to go.”

And like that I was elevated from Uncle Richie’s fake nephew to Richie’s fake brother in just five minutes and 46 seconds. I didn’t get to ask about the physically demanding and maybe even a little repetitive life of a touring musician—one who doesn’t have anything to prove and certainly doesn’t need the money, and I didn’t get to ask who was going to be the last Beatle standing, Paul at 73 or my brother Richie at 75?

See Ringo Starr and his All Starr Band, who are touring in support of their new album Postcards from Paradise, at Vina Robles Amphitheatre this Friday, Oct. 2, at 8 p.m. (tickets at vinaroblesamphitheatre.com).

I’m not sure why this happens too often, but on the very same night that Ringo Starr plays Vina Robles, another favorite of mine is in SLO Town. KCBX, Numbskull, and Good Medicine hosts Dale Watson & His Lone Stars at SLO Brew on Friday, Oct. 2 (7 p.m.; all ages; $15 presale or $18 at the door; tickets are Boo Boo’s and tickfly.com). Oh the humanity! That’s like Sophie’s Choice! 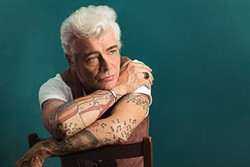 Watson, 52, is an Americana and country singer-songwriter who calls what he does Ameripolitan, a style that harkens back to AM radio country balladeering. He’s been at it for nearly 40 years—he was an emancipated minor who went to school by day and played Houston honkytonks by night—and he recently released his 10th album, Call Me Insane.

Stubbornly independent, he’s a favorite of alt country fans but his rascally outlaw persona appeals to rockabilly and punk fans as well as folk fans. He’s a troubadour in the truest sense of the word. He left Texas for LA in 1988 and under the advice of Rosie Flores joined the house band at the Palomino Club.

He started recording for Curb, moved to Nashville, and finally relocated to Austin, where he’s become a fixture of that vibrant music scene.

Recent NTMA Award Winners Lu Lu and the Cowtippers will open for Watson.

Visit goodmedicinepresents.com for other shows this week.

Australian act DeepBlue—an international touring act that’s reinvented orchestra by injecting it with beats, electronica, dance, and drama—plays the SLO Farmers Market this Thursday, Oct. 1, from 6 to 8 p.m. and has a bevy of YoungBlue Workshop opportunities (ages 8 to 18 on Oct. 9 to 11) in music, dance, improvisation, composition, music technology, stagecraft, and physical theatre to design and present their own totally unique performance (visit http://bit.ly/YoungBlueCalifornia). 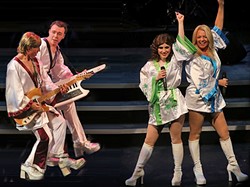 It’s time again for the Morro Bay Harbor Festival this Saturday, Oct. 3, on the Embarcadero from noon to 9 p.m. There’s a ton to do, and this year’s musical guests include blues act Deep Blue, blues and classic rockers Shameless, punk and indie rock act Hot Tina, and ABBA tribute act ABBA FAB. And fireworks close out the festival, which is free!

The Americans play the Red Barn Community Music Series this Saturday, Oct. 3 (5 p.m. potluck; 6 p.m. show; all ages; $15 at the door). Playing original rock and Americana music, T Bone Burnett said the band was “reinventing American heritage music for this century. And it sounds even better this century.” 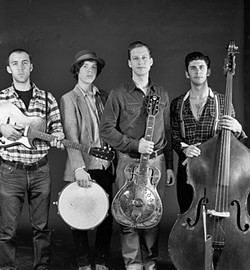 Audrey Howard brings her soulful, searing, and endearing indie rock and folk to Linnaea’s Café this Saturday, Oct. 3, from 8 to 10 p.m. (all ages; free). She says Jimmy Page and Jack White inspire her guitar playing, and Ani DiFranco and Chrissie Hynde inform her independent style.

“I’m Scott Low, songwriter and performer from Georgia,” Low wrote. “I just got married, so me and the new wife decided to go on a 38-day national tour, playing music and sightseeing along the way!” Check him out on Sunday, Oct. 4, at Frog and Peach and Wednesday, Oct. 7, at Linnaea’s Café. 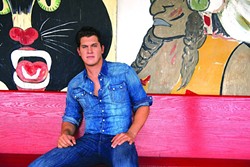 Rock for a cause! A grab bag of big-hearted SLO and Santa Maria bands are banding together to help raise funds for 3-year-old Lorelei Batty of Santa Maria, who is courageously battling pancreatitis. Join King Walrus, Bearcat, The Ragged Jubilee, The Dogons, and Beach Technique at O’Sullivan’s Pub in Santa Maria next Thursday, Oct. 11, (noon; 21-and-older) for a barbecue, raffle, and a ton of great local music ranging from punk, R&B, surf, garage, and more. For more information or to donate raffle items, contact O’Sullivan’s Owner Josh Snow at 925-0658.