Muscle men in wacky costumes punch each other

Sometimes in this column, we tend to focus on the “art” side of things and skim over the “bash.” Not this week, because we’re talking pro wrestling, the least artsy, most bashy game in town. While there is a theatrical element to wrestling and some semblance of storytelling, it’s generally about as deep
as a kiddy-pool. 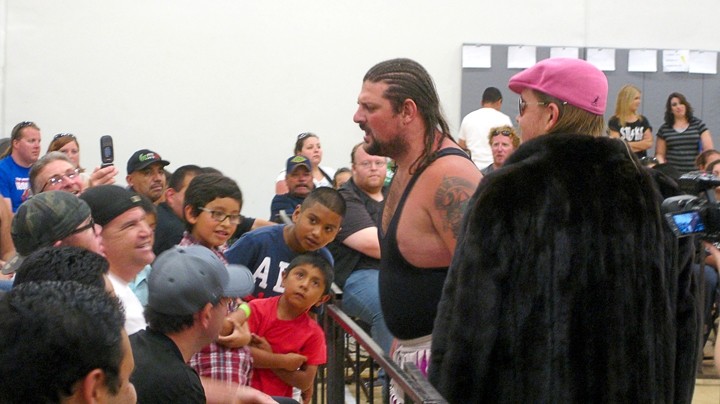 That being said, if you throw some people in a pool and make them fight, I’ll probably watch it, so on June 23, I found myself sitting ringside at the Colony Park Community Center in Atascadero waiting to see the Vendetta Pro Wrestling Summer Sizzle 2012. It was cheesy, so cheesy you could wave a cracker through the air and enjoy a delicious snack, but who doesn’t like a little cheese sometimes?

The first match featured Judah the Apostle, who rubbed me the wrong way right out of the gate. His name sounded a bit too close to “Judas” for my liking, and he was accompanied by a sharply dressed manager. That’s not a good sign. For those readers who were never male adolescents in a post ’80s America, wrestling managers are always cheaters, without fail. You can tell by their sunglasses, which they use to hide their dead, soulless eyes.

It didn’t help Judah’s cause that he was fighting Scorpio, a guy whose costume reawakened my childhood love of ninjas fighting each other to the death by probably violating Mortal Kombat’s copyright protections. Scorpio proceeded to mop the ring with that Judah chump, finishing him with a sweet upper cut straight out of the video game.

From there, a gaggle of street thugs called “Parental Discretion” bum-rushed the ring to talk crap on all the Atascaderans in the audience. Their get-ups were pretty ridiculous, with one guy wearing a speedo that had a dollar sign on the crotch and another rocking a “Super G” on his chiseled butt region. So it didn’t really hurt when they called the city “A-trash-cadero.” Still, I booed their asses with the rest of the crowd and cheered the ragtag team that got to fight them—a soul brother, a cowboy, and two random other guys. Wrestling is not a sport that can be enjoyed ironically. If you want to have fun, you have to dive in headfirst. 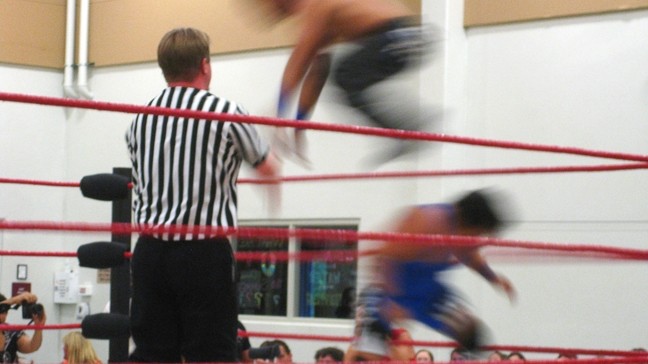 Parental Discretion won, though, and cheaters won the next round, and the one after that, too. So if wrestling has a message for the kids, it’s apparently that cheaters always win. At least the homophobe got his ass kicked.

It was refreshingly offensive seeing one wrestler, Sledge, publicly mock another for being gay in 2012’s California, especially since the whole sport is dudes in spandex rubbing each other. I don’t mind offensive comedy, but this wasn’t even almost funny.

Before the show, I’d talked to Sledge in the makeshift backstage area. He was the local boy, a wrestler from San Luis Obispo, who had first contacted New Times about the event. He told me that professional style wrastlin’ is huge in Santa Maria, where events typically draw 1,200 spectators. Vendetta has a training facility in Lompoc, and interested parties can visit vendettaprowrestling.com for information on how to become a wrestler, a referee, or a dirt bag manager. 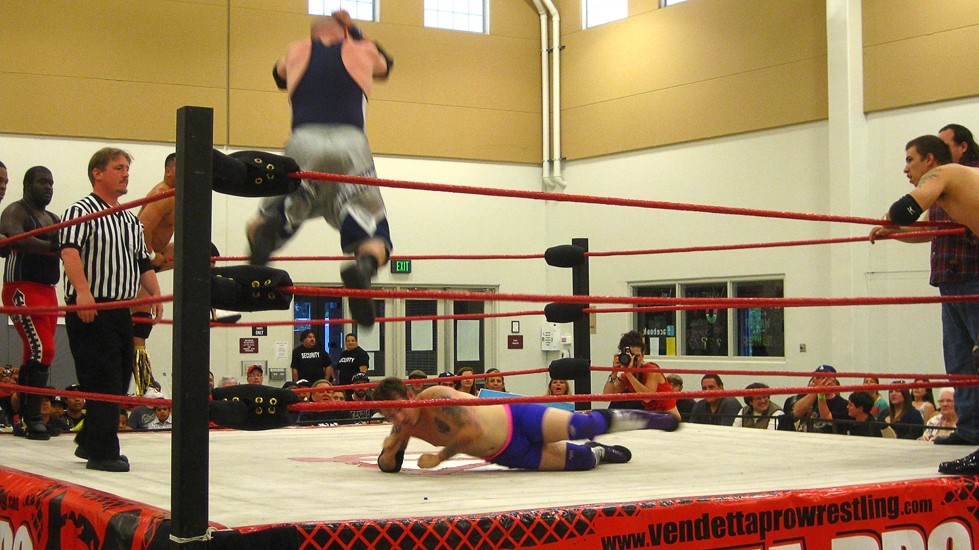 “Do you want a forearm to the face?” Sledge countered.

I took his word for it and tried to enjoy the show for what it was. I’ll tell you one thing: Those guys can kick with serious force. I saw one wrestler miss his opponent by a mile, but the shock waves from his foot were strong enough to send the other guy clear across the ring. If that ain’t impressive, I don’t know what is!

Staff Writer Nick Powell dresses like an octopus, wears a fedora, and wrestles as “The Ink Slinger.” Challenge him to a fight at npowell@newtimesslo.com.