From her big open-voiced anthem of “Steal Me Away” to the hip-hop-tinged “You Part 2,” rising country star Olivia Lane demonstrates she can play it straight or take country music to places it’s rarely gone. One thing that’s consistent in every one of her songs is her infectious effusiveness.

“But hey hey I’m OK/ hangin’ right here in my happy place/ livin’ it up, livin’ it up/ while the rain comes down/ Oh no, I don’t mind/ Got a suitcase full of silver lining/ I know I’m gonna be just fine/ I make my own sunshine, whoa sunshine,” Lane sings on “Make My Own Sunshine.” 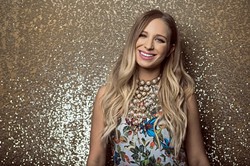 The 24-year-old is unapologetically happy, and in her video for “Long Way to Go,” she proves she’s also a bit of a goofball, which just adds to her endearing charm.

“A lot of my material is about following your dreams,” Lane said in press materials, “about being inspired. Life is wonderful, and why not sing about it?”

Raised in Houston, she was inspired by her mom, a regionally known vocalist who realized early on that her daughter needed a way to focus her energies.

“She noticed I was this crazy child with a loud voice,” Lane recalled, “so she put me in community theater and choir and completely opened up my world.”

“I moved to L.A. because I wanted to move to an entertainment capitol,” she said. “Then I went to college out there at USC and did theater, and started songwriting, and completely fell in love with it. I said, you know what? I could probably do this for a living.”

Nashville came next, where she eventually began working with producer Ilya Toshinsky (Sheryl Crow, Carrie Underwood, Luke Bryan). Her first big single, “Steal Me Away,” was written with Toshinsky and Lee Thomas Miller, and was the signature songs on her Love Thing EP.

“It was really important for me to find a producer who would believe in me,” she said of Toshinsky. “I wanted someone who would work with me on development, but still keeping Olivia, still keeping the essence of who I am.”

She’s definitely someone who’s not afraid to veer from the straight country path. She likes everyone from Michael Jackson to Frank Sinatra.

“I love the big voices, like Trisha Yearwood,” she said. “My fourth grade teacher would play us Frank Sinatra after recess in an effort to calm us down and, of course, the annoying Olivia would learn ‘World On a String’ and belt it out, which my teacher would hate! I love everything, from Katy Perry to Jason Derulo to James Taylor. I just find it all so inspiring because as a kid, I would lock myself in my room and listen to music for five hours until dinnertime. I’m still that kid.”

Purists might find Lane’s pop-country sound a gross bastardization of a genre they love, but haters gonna hate! Check her out when Numbskull and Good Medicine Presents brings Olivia Lane to Tooth & Nail Winery on Saturday, March 26 (7 p.m.; 21-and-older; $12 presale at ticketfly.com or $15 at the door).

That same evening, Numbskull and Good Medicine Presents will also host hip-hop artist Andre Nickatina, who performs at The Graduate on Saturday, March 26 (8 p.m.; 18 and older; $23 presale at ticketfly.com or $25 at the door).

The Bay Area-based rap luminary hit the scene under the name Dre Dog in 1993 with his debut The New Jim Jones and in 1995 with I Hate You With a Passion, which rose to No. 79 on the Billboard R&B/Hip-Hop Albums chart. He’s recorded 10 more albums since, most recently the 2013 self-titled Andre Nickatina.

“Without saying so, Nickatina has had his finger on the pulse of what is raw, uncut, and capable of capturing the mind and ears of listeners,” according to his bio. “Never one to follow or ride trends, Andre Nickatina is a rare breed of artist … one of the last original trend setters. Nickatina does not do what the people want … rather the people want to know what Dre will do next.”

Three’s not a crowd 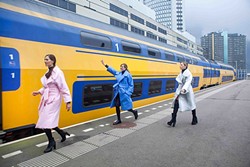 If Ute Lemper, Kate Bush, and Cyndi Lauper could have triplets, they’d play them ABBA when they were little and grow them into a trio called Snowapple, a weirdly compelling and extremely unusual act from Amsterdam consisting of three women with very different backgrounds: jazz, gospel, and opera.

Featuring Una Bergin, Laurien Schreuder, and Laura Polence, the three accompany themselves on guitar, mandolin, keys, flute, and percussion and sing lush harmonies that would make the Andrews Sisters proud. There are also elements of fashion and street performance in their act.

Their new album, Tracks, features railroad-themed songs that are dramatic, surprising, and mesmerizing. They’re really like nothing you’ve ever seen before, but see them you will next Thursday, March 31, at Steynberg Gallery (7 p.m.; all ages; $15). 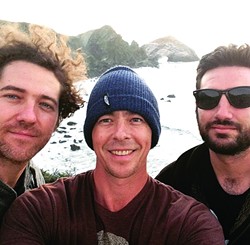 The perpetual touring machine that is Fish Out of Water returns to their SLO Town spawning grounds this Thursday, March 24, for a show at Tap It Brewing Co. (5 p.m.; 21-and-older; free). They recently released a new video, “Chicken and Blunts,” in which they rap about eating chicken and smoking blunts because that’s super dope, yo. They’ve racked up 14 U.S. tours and three Australian tours in the past eight years, just livin’ the dream while mixing rock, funk, reggae, and hip-hop into a sound they’ve dubbed RoPhunk RaeHop.

Big Sur’s Henry Miller Library hosts Beatie Wolfe & the Power of Music this Thursday, March 24 (7:30 p.m. doors; by donation; RSVP at eventbrite.com/e/beatie-wolfe-the-power-of-music-tickets-22060315999). Acclaimed UK-based singer-songwriter Beatie Wolfe will perform her special brand of chamber pop music and discuss her “Power of Music” project, which explores the effects of music on the brain and was inspired by the late neurologist Oliver Sacks’ book Musicophilia. 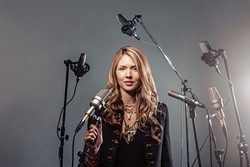 Bay Area multi-instrumentalist Scott Cooper may be best known as the guitarist for the Grateful Dead tribute act the China Cats, but he’s also the man of 1,000 side projects—everything from his solo act that produced 2012’s A Leg Trick, which climbed to No. 5 on jam band radio, to his bass work with the Gary Gates Band, to his bluegrass combo The Intangibillies, to work with the Banana Slug String Band. This week he’ll play twice as Scott Cooper & the Barrelmakers on Friday, March 25, at Otter Rock Café (8:30 p.m.; all ages; free) and Saturday, March 26, at Mr. Ricks (8 p.m.; 21-and-older; free).

Check out the kings of Hawaiian swing music, Kahulanui, which mixes traditional Hawaiian and Big Band swing music! The nine-piece band—four horns plus guitar, bass, ukulele, drums, and steel—plays Cal Poly’s Spanos Theatre this Saturday, March 26 (8 p.m.; all ages; $38.40 to $48 at 756-4849 or calpolyarts.com). “Kahulanui’s execution of big band stylings evokes an era of smoke-filled bars alive with Lindy-hopping dancers,” according to their bio. “Underlying this contemporary take on vintage music is a cultural cohesiveness of enacting ‘ku’I’—of joining old and new.” 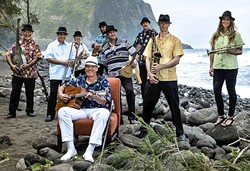 Got a hankerin’ for some Joe Craven but you just can’t wait for the Live Oak Music Festival? Never fear! Música Del Río house concerts presents Craven’s band Painted Mandolin in Atascadero this Saturday, March 26 (7:30 p.m.; all ages; $20 at 466-6941 or online at musicadelrio.org). The quartet’s purpose is simple: “A lot of folks are covering the Grateful Dead, but who is covering the outstanding folk/bluegrass side that reflects the musical roots of Jerry Garcia?” These guys! 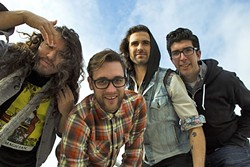 And finally, mark your calendars for two upcoming album release parties with Café Musique next Saturday, April 2 (7:30 p.m.) and Sunday, April 3, (3 p.m.) at the Cambria Center for the Arts. They’re about to release Ebb & Flow, an amazing collection of their Gypsy jazz, folk, and wild classical stylings, and watch these pages next week for an interview with the band.