The story of a NYC seamstress, Intimate Apparel is elegant and evocative 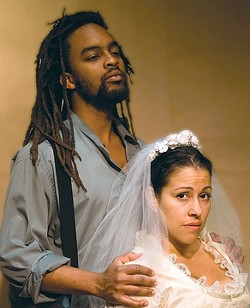 In Shakespeare’s day, a play’s genre was easy to define—if it ended with a wedding, it was a comedy. If it began with one, a tragedy. But what  label fits a play with the sudden matrimony of strangers at its center?

Apparel peeks in on the private business of lower-Manhattan seamstress Esther (played by Amytra Lovell). After 20 years, the steady whir of Esther’s sewing machine has become a mainstay in the boarding house where all other girls eventually leave as married women. And 1905 is an unforgiving year to be 35, unwed, and African-American. But thanks to her nimble fingers and reputation for discretion, Esther has managed to stitch a wad of cash into her quilt over those years—and tucked away a wealth of client’s secrets as well. Her job calls for her to glide seamlessly from the boudoir of 5th Avenue dame Mrs. Van Buren (Kerry Mayling) to that of wisecracking prostitute Mayme (sassy-as-hell newcomer to the stage, Daphne Cox).

But Esther’s content, orderly life begins to unravel when she receives unsolicited correspondence from a mysterious stranger in the Caribbean. The lyrical Mr. George Armstrong (Esron Gates) has suddenly taken an interest in her. His letters, narrated by Gates’ rhythmic voice, tell of days spent laboring along the Panama Canal, of fellow workers fallen dead to his left and right, of acute loneliness and unquenchable longing for “a gentlewoman’s touch” at the end of a hard day. His every syllable is drenched in sun, salt, and burnt sugar, and Esther drinks in his words in the same gulping way that Mrs. Van Buren downs brandy, or the way Mayme chugs gin.

For years, Intimate Apparel has been close to the heart of veteran director Anet Carlin. At first, it seemed San Luis Obispo wasn’t the place for a drama about the private lives of African-Americans in New York City: Where would Carlin get the cast? The task of finding actors to fit the roles was a trying one, but Carlin is a tenacious sort. “I had to cast a wide net,” she said. At one point she “tried to recruit every good-looking African American on the street” to try out for the play.

Apparel is, to Carlin’s knowledge, the Little Theatre’s first production to center around a cast of black actors. Several of those actors have next to no experience onstage, though you’d never guess it.

In fact, Carlin prefers it that way. “As new actors,” she said, “they have an honesty that is not overwhelmed by ‘the craft’” of acting. The actors allow their own heritage, rather than a learned set of acting techniques, to inform their performance.

George and Esther’s messages continue to increase in frequency and audacity. George’s words, carried on a lilting Caribbean cadence, bring a bit of the tropics to Esther’s stuffy boarding house. A lush jungle creeps out from the upper reaches of the stage, symbolizing Panama, George, and their constant presence in Esther’s thoughts.

But even with these distractions, Esther still finds herself drawn to Mr. Marks (Stuart Wenger), from whom she buys cloth.  Rabbinical law forbids Marks, an Orthodox Jew, from so much as touching Esther. But the two share a bond over hand-dyed Japanese silk, tulle, chiffon, and white satin so delicate “it looks like little fairy hands made it.” Wenger’s charming accent and earnest manner make Marks’ character endearing and real. Yet their mutual affection is as perceptible as the impossibility of any romantic progress. As director Carlin said, “They have a love affair through fabric.”

Nottage’s play is too richly layered for easy categorization. But among other things, it is a play about personal constraints, cinched up tighter than any of Esther’s fine corsets. A talented musician, Mayme lets her dream of becoming a concert pianist die. Mrs. Van Buren is unable to simply divorce her distant husband, sighing, “At my age it would prove disastrous.” Neither is content within the confines of convention. It is clear in the way Mrs. Van Buren tries to win back a disinterested husband with lace and feathers, or the frenzied way Mayme hammers out her piano compositions between visits by customers.

But despite her lower class, Esther takes her dreams seriously. With the money tucked into her quilt, she intends to open up “a beauty parlor for colored ladies,” somewhere they can put their feet up and be treated nicely for a change.

But everything Esther has worked for is about to split at the seam. When George suddenly proposes to her in one of his steamy letters, she joyfully accepts. But keep watching; this is where the intrigue really begins.

Anna Weltner can be reached via the Arts Editor Ashley Schwellenbach at aschwellenbach@newtimesslo.com.