Rite Aide employee injured in confrontation with shoplifter in Paso

A loss-prevention employee suffered minor injuries after he was reportedly dragged behind a vehicle while attempting to detain a shoplifter in Paso Robles.

According to Paso Robles Police Department officials, the incident occurred on April 2 around 9:30 p.m. outside the Rite Aid on 2424 Spring St. 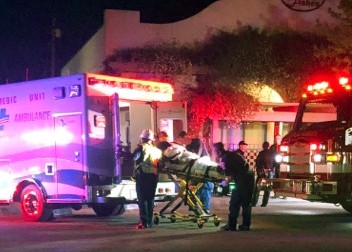 Police initially responded to multiple reports of a collision between a vehicle and a pedestrian. However, further investigation revealed that the incident began after an unnamed loss-prevention employee in the store attempted to stop and detain a shoplifter. The shoplifter allegedly left the store and got into a vehicle to flee the scene. The employee followed him outside and attempted to hang on to the suspect's vehicle, described by police as a white truck. The loss-prevention employee lost his grip and fell from the truck, which fled the scene, according to police officials.

The loss-prevention employee was taken from the scene in an ambulance, but Paso PD Cmdr. Caleb Davis said the employee suffered only minor injuries as a result of the incident. No arrests have been made, but police have released a photo of the suspect, who appears to be a white male.

The incident remains under investigation. When asked about loss prevention employees and other civilians physically confronting suspects, Davis said the department asks people to consider their personal safety and contact the police in such situations.

"Officially, we'd like them not to put themselves in harm's way," Davis told New Times. "We'd certainly like to avoid them getting injured themselves."

Rite Aid's corporate headquarters did not respond to a request for comment from New Times. Davis said that the Rite Aid location wasn't usually a problem area for the department. The investigation remains ongoing, and the Paso Police Department is asking anyone with information about the incident to call (805) 237-6464.