Want to know what wife beater, drug addict, criminal, and musical genius Ike Turner had to say about Café R&B? “Café R&B knocked me on my butt. I ain’t seen shit like that since me and you-know-who!”

It’s perfectly reasonable to equate Café R&B singer Roach's talent to Tina Turner's, and R&B guitarist Byl Carruthers can coax some gritty riffs out of his ax. Café R&B is a band that demands to be seen live, and watching Roach writhe and shudder like a woman possessed is nothing short of electrifying!

The San Luis Obispo Blues Society welcomes the return of Café R&B on Saturday, Jan. 26, in the SLO Vets Hall (8 p.m.; 21-and-older; $20 at the door). If you’ve never seen this L.A.-based act that had a long running gig at The Mint, you’re advised to check them out. If you have seen them, you know how killer their show is.

Watching Roach and the band interpret blues classics like “Born Under a Bad Sign” or “Killin’ Floor” is incredible, as if you’re transported back in time to when R&B was new and raw and dangerous and explosive.

The band’s been around since 1995, and after taking the L.A. blues scene by storm, they landed an invite to Buddy Guy’s Legends in Chicago, which launched an international career and tours through Europe and throughout the United States.

They have four albums out, most recently last year’s American Music. If you have even a passing interest in R&B, I highly encourage you to see this band live. You won’t regret it! And for some icing on the cake, Guy Budd and the Gypsy Souls with special guest vocalist Inga Swearingen will open the show, playing a blend of blues, rock, funk, and jazz.

The Blues Society runs primarily on volunteers to produce and staff the concerts. At the shows, volunteers set up, sell tickets and drinks, or clean up after. Volunteers get free admission to the show and a drink ticket. If you have extra time and energy to contribute, call the volunteer line at 541-7930.

There are free dance lessons for ticket holders at 7:30 p.m., and if you become a Blues Society member, admission is only $17. Find out more at the door. 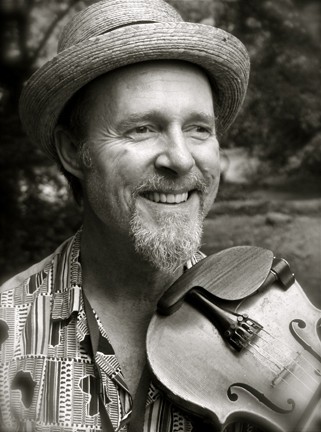 Café Musique always makes me cry at their poignant music, and Joe Craven always makes me laugh with his wild antics, so I don’t know what’s going to happen when they join forces to play two shows on Saturday, Jan. 26, at the Steynberg Gallery (3 p.m. and 7 p.m.; all ages; $25; call 547-0278).

What’s this all about? Well, as in years past, Café Musique is planning another one of its traveling tours, this time May 8 to 19 on a Portugal Douro River Cruise, and this time they’ve invited Joe Craven to join them.

“For the first time ever, the virtuosic musical madman Joe Craven will be sharing the stage with the gypsy and wild classical sounds of Café Musique for a unique evening of backyard and world music,” according to press materials. “The two musical forces are touring together to promote their upcoming trip to Portugal in May 2013 and would like to invite any and all to come to the show, but indeed, to also join them on the riverboat they’ll be sailing on in Portugal.”

Unfortunately, I can’t afford the $3,825 per person cost of the cruise, not to mention the flight to get there and back, but if I could, I’d go! Instead, I’ll have to settle for one of these two concerts on Saturday, which will preview some of the musical collaboration I’ll be missing in May.

The show will feature Gypsy music, tangos, “wild classical,” folk, and “body slapping and found percussion.” And just so you know, I think these musicians are geniuses—not just musical geniuses, but the sort of geniuses who wrangle awesome trips to exotic locales while doing what they love: playing music!

SLO Brew to the musical rescue

SLO Brew kicks off its week on Friday, Jan. 25, with Two Gallants (7:30 p.m.; all ages; $10 presale or $12 at the door), a folk and blues-based duo who, with The Bloom and the Blight, have created an album “imbued with a palapable sense of personal catharsis,” according to press materials. “Opening tracks ‘Halcyon Days’ and ‘Song of Songs’ illustrate the type of build to explosion that’s omnipresent throughout the album, and the prowling ‘My Love Won’t Wait’—with a menacing chorus underscored by a pounding backbeat—is an epic, booming anthem. The gentler ‘Broken Eyes’—all voices, guitar, harmonica, and tambourine—has already become a fan favorite with its rousing, harmony-filled final verses, while the cinematic ‘Ride Away’ soars on Adam Stephens’ raspy howl and Tyson Vogel’s relentless drumming. The songs have a dark side and a dynamic sonic heft, yet a sense of salvation and resolve courses throughout: an urgent, emotional poignancy stemming in part from Stephens’ recovery from a serious van accident in 2010,” the duo said about the album. Future Twin will open the show. 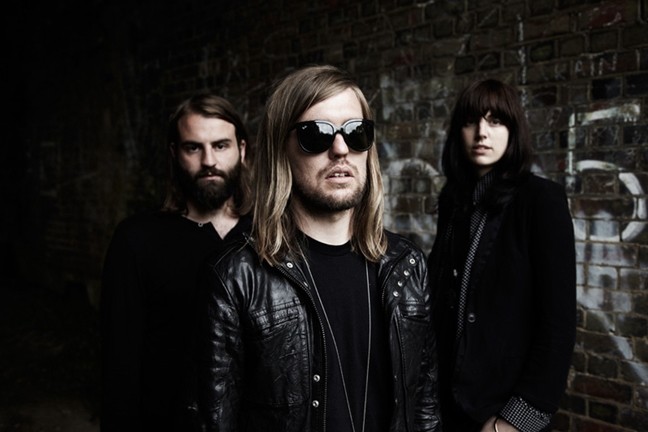 Reggae fans should take note of Saturday, Jan. 26, when Natural Vibrations with opening act The Kicks takes the stage (7 p.m.; all ages; $10 presale or $12 at the door).

Get your Brit-rock itch scratched on Sunday, Jan. 27, when Band of Skulls plays (8 p.m.; all ages; $15). “In our minds, our first album [2009’s debut album Baby Darling Doll Face Honey] was quite an intimate little record,” singer-guitarist Russell Marsden said in press materials. “But it turned into this huge rock thing in venues across the world.” See what all the fuss is about from this trio from across the pond.

On Tuesday, Jan. 29, it’s Shwayze time (8 p.m.; all ages; $14 presale or $16 at the door)—with opening acts Terraplane Sun, Paul Couture, and JP The Diesel—in what promises to be a bumping evening of alternative hip-hop.

Finally, the Brew closes out its week on Wednesday, Jan. 30, with He’s My Brother She’s My Sister and opening act Sioux City Kid (7:30 p.m.; all ages; $8 presale or $10 at the door). The headliner says its music is “flamboyant folk,” “psych-acoustic,” “estranged and glamorous,” and “vaudeville-y.” They’re touring in support of their Nobody Dances in this Town LP, which was released on Jan. 22. In more news, earlier this fall, the band premiered a cover of The Mamas and Papas’ “Straight Shooter” via Prefix, and this month the band’s “Touch the Lightning” single was featured as a Starbucks iTunes “Pick of the Week,” receiving 267,775 downloads. “Featuring sibling vocalists and a tap dancing drummer, the band exudes the earnestness of folk, the colorfulness of glam rock, the rawness of blues, and the theatrics of cabaret,” continued the band’s press materials. “Brother and sister Robert Kolar and Rachel Kolar split vocal duties, with Robert on guitar and kick drum and Rachel on tambourine. Lauren Brown adds full-body percussion with her simultaneous drumming and tap-dancing. Oliver Newell plucks the stand-up bass with joyous flair. Aaron Robinson plays lead guitar on a lap slide. The eclectic troupe has toured the U.S. extensively, having shared the stage with Neko Case, Edward Sharpe & The Magnetic Zeros, Charles Bradley, The Blow, Local Natives, Dawes, Dr. Dog, My Morning Jacket, and many others.” Sounds pretty cool, man.

The Salty Suites headline the SLO Down Pub on Thursday, Jan. 24 (6:30 p.m.; all ages; pass the hat). The L.A.-based act has a passion for roots and bluegrass, as well as traditional mountain music. Guest performers include Loren Radis, Chad Schmid, Chris Gaul, CV Wells, and a new duo called Jane & Michael Banks. You can also see The Salty Suites when they play Friday, Jan. 25, at D’Anbino Tasting Room (8 p.m.; 21-and-older; $10 at the door … $5 for Record Club members).

“Some folks say there’s nothing better than live music ... unless it’s wine and live bluegrass music,” said members of the Appellation Bluegrass Band. Test the truth behind the adage on Friday, Jan. 25, starting at 7:30 p.m. when they play SLO Down Pub. “Bad guys will win, children will learn, love affairs will sour, and we’ll pray it’s gone at last—in song,” added the band.

Organ recitalist Herndon Spillman, in demand both here and abroad and known for his interpretations of the works of the French composers, plays Friday, Jan. 25, at 8 p.m. in the Performing Arts Center’s Cohan Center on the Forbes Pipe Organ. A protégé of Maurice Duruflé, Spillman is highly regarded as an interpreter of Duruflé’s music. Student and adult tickets range from $17 to $33 (756-4849).

Barflyz, a cabaret-style quintet, will perform everything from original cool jazz and pop hits to standards and bebop on Saturday, Jan. 26, at D’Anbino Tasting Room (8 p.m.; 21-and-older; $10 at the door).

The Cal Poly Early Music Ensemble, university faculty, and visiting professionals will team up to present “Bach in the Mission III” at 8 p.m. Saturday, Jan. 26, at Mission San Luis Obispo de Tolosa. Featured soloists will be soprano Elissa Johnston and oboist Paul Sherman. Both live in Los Angeles and have performed internationally. The program includes Cantata No. 84, “Ich bin vergnügt mit meinem Glücke” (“I am content with my fortune”) for solo soprano; Oboe Concerto in D minor, BWV 1059R; “Brandenberg” Concerto No. 3 in G major, BWV 1048; and Motet No. 3, “Jesu, meine Freude” (“Jesus, my joy”), BWV 227. “This is a wonderful opportunity for our talented Cal Poly students to sit next to professional musicians and make music at a very high level,” said Music Professor Thomas Davies, who will conduct the concert. Tickets to the concert cost $14 for the public, $12 for senior citizens, and $9 for students. Call 756-4849.

Burns & Kristy headline Sculpterra Winery on Sunday, Jan. 27 (1 p.m.; all ages; pass the hat). The New York-based folk-pop husband-wife team’s music has been described as “indie-folky-pop with a spiritual and whimsical attitude.” Guest performers include recent Cal Poly grad Evan Brown, Bay Area bluegrass artist John Roy Zat, guitar wizard Dorian Michael, and local writer Amie Richie. Said Ron Kristy, “We’re so excited about this trip to California—first of all because it’s 20 degrees here in Ithaca and our 7-year-old, Noah, can’t wait to go to a theme park out there! But really, it’s a wonderful opportunity to share our music, have a blast, and connect with many new friends. We both feel strongly that the next step of our musical and spiritual journey begins with this tour.”

The Mason Blackwell Duo plays Luna Red on Sunday, Jan. 27 (2:30 p.m.; all ages; free). Stuart Mason and Kenny Blackwell are launching their new duo and its repertoire of traditional Americana and acoustic blues. The two seasoned masters of guitar and mandolin are members of Little Black Train, a popular local bluegrass-roots trio.

Aaron Porter plays Upper Crust Trattoria on Monday, Jan. 28 (6:30 p.m.; all ages; pass the hat). The rootsy rocker leads the six-piece SLO-based band called Porter, and concert organizers weren’t sure if the band would be joining him or if he’d be playing solo. Maddy Hunt (formerly of Sassafras Union) will also perform.