Road warriors: You've seen the signs, but what is adopting a road or highway all about?

If one man’s trash is truly another man’s treasure, then San Luis Obispo County is more rife with treasure hunters than the pirate-era Caribbean.

By all accounts, picking up litter on the side of a road or a highway isn’t the sexiest of vocations, but hundreds of local volunteers donate their time to do just that every single year.

“All I can say is that a lot of people get hooked and end up really loving it,” said Julia Meyers, the SLO County Adopt-A-Road program manager. “People with a lot or a little money take the same amount of pride in maintaining their stretch of road—it’s wonderful.”

Meyers manages a countywide network of about 90 volunteer Adopt-A-Road groups which provide perhaps the best deal around—roughly 200 miles of county roads cleaned up for little to no cost.

According to Meyers, the program was created in the late ’80s to address the urgent need for road cleanup—a task county staff was unable to tackle with little staffing and no budget for litter removal.

Today, volunteer groups under various umbrellas—including companies, restaurants, schools, churches, and community associations—pay a one-time fee to the county (currently set at $72) for a permit to post their road sign, and are thereafter responsible for cleaning up their desired stretch of road, ranging from 2 miles to as large as they can manage, at least once every three months.

“There’s always the potential for new roads to be adopted,” Meyers said. “The benefit of picking up litter in SLO County is that there are lots of beautiful places to work.”

SLO County’s Adopt-A-Road program includes all non-numbered roads in unincorporated areas, individual cities often have their own programs, and Caltrans’ larger Adopt-A-Highway program targets all numbered highways in the county.

Keli Kolaczyk, the Adopt-A-Highway coordinator for Caltrans’ District 5 (stretching from Santa Cruz to Santa Barbara), said her program is a “no-brainer” in terms of the benefit it creates for such minimal cost.

“Having the road sign is important for some people, but the top reason for participating by far is that people genuinely want to clean up their local highways,” Kolaczyk said. “Once you have your name on a sign that large, the pressure is on to make sure the highway doesn’t look trashy.”

Kolaczyk said that her program requires a minimum five-year commitment to an adoption, and has similar permitting/safety provisions to those of SLO County—making sure all volunteers are as protected as possible. Volunteer groups must clean up their stretch of highway anywhere from multiple times a month (on busy stretches of Highway 101) to once every two months (for more rural, less-trafficked highways). 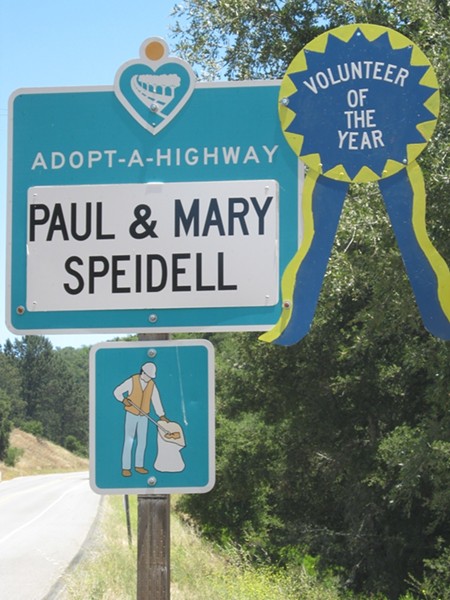 One such Caltrans volunteer is Arroyo Grande resident Fred Brebes, 70, who has been picking up litter with his wife on the same stretch of Highway 101 southbound near the Oak Park Road exit for 20 years.

“We mostly see cans and bottles, some plastic bags, cardboard, a few tires, papers, diapers, and car parts all along the highway,” Brebes told New Times. “We take pleasure in keeping the county looking nice and helping our neighbors.”

Brebes, who also worked in various roles for Caltrans for 40 years before retiring recently, said he and his wife pick up about a cubic yard of litter once a month, meaning they’ve removed about 240 cubic yards of material since he’s adopted the highway segment.

“It’s just something I find worthwhile,” Brebes said. “We’ll all have a better-looking roadside if people volunteer, and so anybody who wants to accomplish that should help out.”

Paul and Mary Speidell, another local couple, even topped Brebes’ impressive volunteer record, as they cleaned up the same stretch of Highway 46 West continuously between 1997 and 2011, earning Caltrans’ “Volunteers of the Year” honor upon their retirement in 2011.

“I have a lot of respect for the people who physically go out there and do the hard work,” Kolaczyk said. “We have exceptional volunteers.”

Both Caltrans and SLO County’s program provide free orange vests, trash bags, and volunteer training/orientation sessions so that cleaning up road segments is as easy as possible.

“There are quite a few people who don’t even want a sign and clean up their roads anyways,” Meyers said. “I would say it’s a mutually agreeable activity.”

For those interested in volunteering with SLO County Adopt-A-Road, call Julia Meyers at 781-5276 or visit slocounty.ca.gov/Assets/PW/Traffic/Adopt-A-Road.pdf.

To find out more about Caltrans’ Adopt-A-Highway program, call Keli Kolaczyk at 542-4755 or visit adopt-a-highway.dot.ca.gov.