Roadrunner: A film about Anthony Bourdain 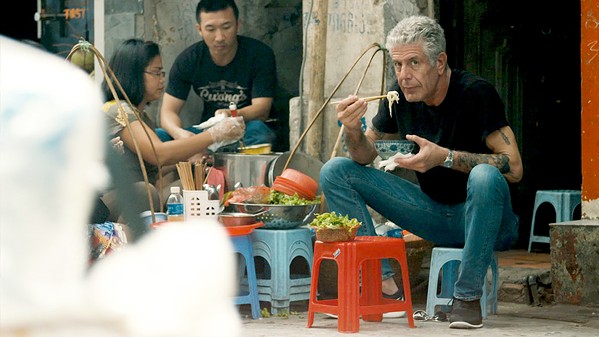 Where’s it showing? The Palm Theatre

What’s it worth, Anna? Full price

What’s it worth, Glen? Full price

Morgan Neville (Won't You Be My Neighbor, 20 Feet From Stardom) directs this documentary about revered chef, writer, and TV host Anthony Bourdain, known for authentic approach to food, culture, and travel. (118 min.)

Glen I didn't know much about Bourdain going into this film. I never read his bestselling book Kitchen Confidential or watched any of his TV shows. I knew his name and that his shtick was traveling to exotic locales and eating weird food. When he died by suicide, after the outpouring of grief, I started to understand the depth of his celebrity. A lot of people clearly revered him, and Roadrunner is a film dedicated to showing why. It clearly wants to romanticize him, painting him like a flawed searcher/hero always looking for the next thrill, adventure, or experience. The film is frank about his early drug use, unapologetic about his drinking, forthright about his failed romances—actually, "failed" is the wrong word, because in each case save the last, the relationship remained but the romance ended. I don't know if this is a true, full portrait of Bourdain, but it's certainly entertaining and insightful. He built his reputation over time, took a lot of pleasure in his notoriety, was something of a control freak, but he seemed to have a junkie's mindset—nothing was ever enough, he was always looking for the next high, always coming down or shooting up not with drugs but with leaps into the unknown. Aside from the cop-out of suicide, he's painted as admirable.

Anna Kitchen Confidential is a book that hits too close to home with anyone who's worked in the restaurant industry, especially back-of-house folks like cooks and dishwashers—especially in urban, culture-rich food areas like NYC and LA. Once his book hit, the world was treated to the dirty little secrets that folks in the industry knew all too well—the drugs, booze, and sex-filled underground that happens behind those swinging kitchen doors. Bourdain was somewhat of an anti-hero. He wasn't polished or shiny like every other TV chef, yet he had a realness that audiences connected with. What we learn is that the complicated man we thought we knew was just a tiny fraction of the actual person. He kicked his drug habit, but it changed his brain forever, and he was always chasing some sort of peace but could never settle himself enough to find it. Through interviews with his close family, friends, and fellow chefs, we get an intimate look at the painfully shy and tortured person hidden under bravado and ego. We look at how becoming a father changed his life, yet how it ultimately couldn't save him from himself. This was a really emotional and difficult film in moments, but it was ultimately a truthful and resonant look at an author, traveler, and man who the world is still mourning.

Glen Viewers should obviously know going into this film that it's a tragedy. We all know the ending—death by hanging at age 61. Now three years later, those closest to him still struggle to talk about his demise, often breaking down into tears. The film intimates that Bourdain's relationship with his final girlfriend, Italian actress Asia Argento, who was a strong and early voice in the #MeToo movement and one of Harvey Weinstein's victims, may have played a role in his despondency, but Bourdain joked about suicide too frequently to blame his death on anyone but himself. It would be a double tragedy to focus too much on his end and not enough on his beginning: his second chance at life post-heroin, the blossoming of a deep talent for storytelling that was always in him but didn't reveal itself until his 40s, his all-in dive into his three great loves, and his dedication and drive to shine light on the marginalized people and places suffering injustice and deprivation. He fearlessly smashed through life and loved the scars it left as much as the sparkling memories.

Anna I definitely remember first hearing that he was gone. It was a loss not only for those in his life, but the cooking community and traveling communities felt hit hard as well. I think one trait that really attracts people to Bourdain and interested them in watching his travels is he isn't a bright and shiny personality—he's not on screen in a studio kitchen yelling "Bam!" and showing you how to use pasta water to thicken a sauce. He's out in a remote village in Africa sitting on the dirt floor and learning from the locals about the community and cuisine or slaughtering a cobra and eating the heart while it is still beating. He wasn't interested in feeding his audience a false story. He was both big in life and also very small, difficult, complicated, and hard to please. He was a hopeless romantic, a man who believed in the greatness of love, and a friend who could prove so cutting and cruel that it left those around him broken and floored. Suicide is most painful to those who live on, and while I wish we didn't have to have this movie in memoriam, Bourdain lived a life that filled so much space. Luckily, we got to join in some of his journeys, and Roadrunner is a tender tribute to the complexity of being human. Δ