Roads with a view

One of the most iconic views in SLO County a sweeping vista from Highway 46 West, used as the glossy centerfold photo in the Chamber of Commerce visitor's guide is back on the table for possible protection from new ridgetop mansions.

After a marathon hearing on the "Cayucos Fringe Viewshed 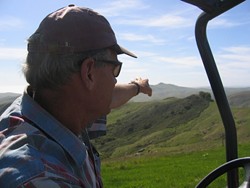 # ordinance" April 3, the county Board of Supervisors voted to reconsider a stringent view protection plan supported by the Cayucos Citizens Advisory Council and dozens of speakers.

Supervisors will wait till June 12 to choose one of three possible view protection ordinances: the one supported by the Cayucos council and written by its attorney Roger Lyon, which covers scenic vistas on more than 50 square miles of hilly terrain from Highway 1 northeast to Templeton a county staff proposal that includes the views seen from Highway 1 and Old Creek and Santa Rita roads and a less stringent version submitted by the Farm Bureau, the Cattlemen's Association, and a group called Protect Our Property Rights, or POPR, that would cover only the Highway 1 corridor from Villa Creek to Toro Creek.

None of the viewshed protection ordinances would prohibit development of homes on the land, and none would apply to agricultural buildings including wineries. The goal is to regulate placement of new homes to prevent "skylining," or silhouetting on prominent ridgelines, and to require some screening vegetation.

Much of the county is already covered by laws designed to protect scenic rural vistas, and discussions and arguments have been going on for five years about protecting the Cayucos area's views.

Supervisor Bruce Gibson, whose district includes the Cayucos area, included a strong viewshed protection law in his election platform last year. But since he lives in the area that would be affected, on Old Creek Road he hasn't been able to vote on the issue because of a possible conflict of interest.

Speaking as a private citizen at the Board of Supervisors meeting, Gibson called the latest Farm Bureau proposal, which eliminates Old Creek and Santa Rita roads, "weak to the point of being meaningless."

Like other speakers, Gibson criticized the Farm Bureau for crafting its new ordinance in what he termed a "deeply troubling" closed-session meeting, which he and other dues-paying Farm Bureau members were not allowed to attend.

Farm Bureau president Paul Clark defended the group's decision-making process in an interview before the meeting, comparing it to "any corporation" where the board of directors chooses to debate and vote on important topics in closed session.

"There is not going to be a mad rush for development," Clark told the supervisors, suggesting that a future general plan update would be "the best way for all sides to be heard" on the issue.

Farm Bureau spokesperson Joy Fitzhugh said, "The Farm Bureau has put forth a meaningful regulation that protects quality of life and the views from Highway 1, not winding country roads."

Attorney Lyon showed the board some photos of two massive new hilltop houses in the rural Cayucos area, and said that as many as 1,200 homes could be built on existing lots in the rugged landscape. Bill Warren of Cambria pointed out, "There are a number of unsightly buildings on top of ridgelines now." Other speakers referred to "starter castles."

"The people who are there have been good stewards of the land," said one speaker, Richard Gonzales. "They don't need regulation. They need that dirty word: profit."

Speaking for POPR, the property rights group, Pat Molnar said view protection has been "a very heated issue" that has split up friends and families.

Supervisor Harry Ovitt, who introduced the new Farm Bureau ordinance without notice two weeks ago, said it's an issue of "neighbors fighting neighbors about what they want to see."

Supervisor Jerry Lenthall wants to try to bring the different groups together to "hammer out our differences" before the June 12 meeting.