On March 25, Cal Poly graduate Andrew Wickham won first place in the annual California’s Strongest Man contest at Huntington Beach, despite many of his competitors being both taller and larger than he.

“I think a lot of it was practicing getting really good at the events, training skill, and speed,” Wickham said. “I definitely was not the strongest competitor, but I was probably the most rounded competitor.”

California’s Strongest Man competition consists of a variety of weight lifting and strength-related events that participants are told about ahead of time. Wickham’s favorite event is the atlas stones, in which one has to lift massive boulders and place them on a raised platform. Luckily for Wickham, this was the very last event, and it earned him enough points to move up from third place to first.

“That event’s always been good for me,” he said. “There’s just something about getting dirty and lifting a big old rock.” 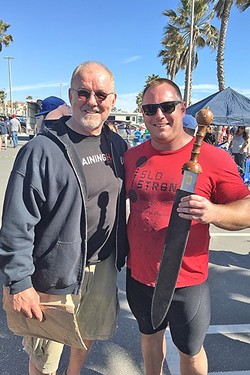 Wickham first began lifting weights during high school as part of training for the various sports he did, but he didn’t take part in any fitness activities during college. After college he moved to Paso Robles, where he dabbled in cardio workouts and obstacle courses after noticing that he had “gained bad weight as opposed to good weight.” However, Wickham realized that he enjoyed weight training more than other workouts, so his interests gradually shifted to powerlifting.

“I decided on doing the sport that more catered to what I’m more naturally good at,” he said. “I haven’t looked back since.”

It didn’t take long for Wickham to make progress. His first competition was last year in Fresno, where he got “dead last place,” but he then went on to win a different competition in Santa Cruz a few months later. Last year was also when he started a local powerlifting team, SLO Strong, which rotates training at different gyms around SLO County every week.

“Some gyms we cold called,” Wickham said. “We said, ‘We’re not another gym, we’re not trying to steal your business.’ A lot of gym owners get really excited about it. … What’s great about SLO County is how small a world it is. As soon as one or two of them know about you, they go out and have a beer with other gym owners and tell them about you. The gym community is similar to other communities, like the bar community or wine community in that way.”

Two other SLO Strong members also competed in California’s Strongest Man with Wickham, but were unable to finish due to injuries. This gave Wickham some mixed feelings about his victory.

A couple of injuries won’t stop SLO Strong. On May 13, the group is hosting the Central Coast’s first powerlifting meet, and on July 30 SLO County will have its first strongman competition at the Mid-State Fair.

“When I first started out, no one else around here was doing powerlift sports,” Wickham said. “I didn’t realize how popular it was in other areas. I knew I needed to start spreading the news.”

To find out how you can get involved in SLO Strong, check out slostrong.com or look up SLO Strong on Facebook or Instagram.

• The Morro Bay Harbor Festival, set for Oct. 7, 2017, is looking for volunteers to fill four open positions on its board. “Meetings are held at the festival office at 895 Napa St. in Morro Bay on the first and third Mondays of the month at 4 p.m. To apply, contact Don Doubledee or Donna Drum by calling 772-1155 or emailing info.mbhf@gmail.com.

• Kennedy Club Fitness and A.M. Sun Solar are starting construction on a project that will install more than 900 solar panels on the roof of the fitness club’s San Luis Obispo gym as well as on raised parking structures that will provide shade to vehicles. The solar arrays will offset 95 percent of the club’s energy usage, according to a joint press release from Kennedy and A.M. Sun Solar.