Bill Gahafer was diagnosed with Parkinson's 13 years ago and was dealing with the disorder by exercising.

"I tried some exercises on my own like riding a bike, hiking, and stuff like that but it wasn't a well-rounded enough exercise," Gahafer said. 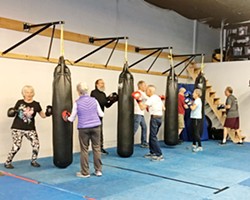 Parkinson's disease is a disorder of the central nervous system that affects movement and can cause deterioration of motor skills, balance, speech, and sensory function. He said the biggest wake-up call he got was when he started having issues with balance.

"I'd fall once or twice a week. It got to a point where I wouldn't go out much. I would have to stay home, but I started falling in my garage," Gahafer said.

Once he heard about Rock Steady Boxing Central Coast, a nonprofit organization that helps improve the quality of life for individuals diagnosed with Parkinson's disease, he signed up right away. The hour and a half long class helps individuals regain control of their body movements through a non-contact boxing fitness curriculum.

Dave Sanchez is one of the instructors of the program who started the Rock Steady affiliate in August of last year. He said that his father-in-law was diagnosed with Parkinson's, and at the time, Sanchez was helping him figure out an exercise regime that would help.

He found the nonprofit organization that was started in Indianapolis by Scott Newman, who is living with Parkinson's. Newman began intense one-on-one boxing training just a few years after he was diagnosed with early-onset Parkinson's at the age of 40. The dramatic improvement he saw was enough positivity to persuade Sanchez to bring the program to San Luis Obispo.

"When you get that initial diagnosis of Parkinson's, people think: Progressive, chronic, and no cure. It sounds bad and is bad, but at least there are programs like Rock Steady and anything else like it that demonstrate hope," Sanchez said.

The training program focuses on hand-eye coordination, agility, speed, and balance—everyday life skills that the Parkinson's community struggles with. Along with exercising the body, Sanchez said the fitness group is also a place for people to interact and socialize with others who are struggling with the disease.

"It's a social place for them to come in and have this tribe, get together and share with one another," he said.

Gahafer said since that since he started the program in August, he's seen a huge improvement in his balance—he's only fallen once. And he's not the only one seeing results.

Elizabeth Salzgeber was the first individual living with Parkinson's who joined the Rock Steady program last year. She was diagnosed in late 2014. Salzgeber has exercised regular since the age of 40. She's now 75.

"I always walked a lot. I live in Morro Bay and walked on the beach just about every day," she said.

Before the diagnosis, she was experiencing tremors, trouble with movement in her leg, and severe depression.

"We were camping and I remember telling myself, 'You get yourself out there and get moving, quit looking like an old person,'" she said with a laugh. "I'm very relentless."

Now Rock Steady has a SLO location, and Salzgeber said she's encouraged to work much harder than she would on her own.

Salzgeber's husband, Gar Salzgeber, sits on the sideline supporting her during every class—the program encourages the growing group to bring a supporter whether it's a spouse, caregiver, or friend.

"I'm just very encouraged as a volunteer, it's really satisfying to watch these people improve and have a chance at changing their life," Gar said.

Transitions Mental Health Association (TMHA) is gearing up for the 37th Annual Strike out Stigma Bowl-a-Thon, March 8 through 23. Bowlers will fill the lanes at Mustang Lanes and Pismo Bowl to enjoy friendly competition and fundraise for a cause. Funds raised will support SLO Hotline and other mental health services in San Luis Obispo and Northern Santa Barbara counties. TMHA has operated SLO Hotline, (805) 783-0607, since January 2010. It is a mental health support, crisis, and suicide prevention telephone line offering free, confidential support 24 hours a day, 365 days a year. To learn more about TMHA, visit t-mha.org. Δ