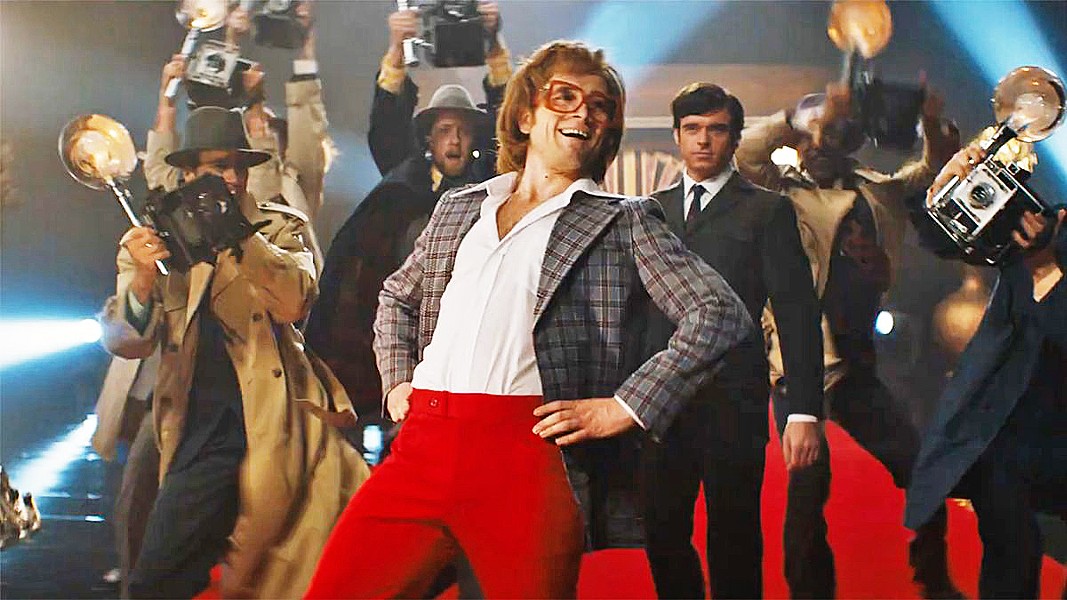 Dexter Fletcher (Wild Bill, Sunshine on Leith, Eddie the Eagle) directs "a musical fantasy about the fantastical human story of Elton John's breakthrough years," with Taron Egerton in the lead role as the singer of "Rocket Man," "Your Song," "Daniel," and dozens of other hits. (121 min.)

Glen Written for the screen by Lee Hall (Billy Elliot, War Horse, Victoria & Abdul), this loosely accurate biopic is constructed with an interesting frame. We start with Elton—née Reginald "Reggie" Dwight—walking into an AA meeting in full stage costume, where he introduces himself as Elton Hercules John, an alcoholic, sexoholic, and cocaine and pill addict. He proceeds to chronicle through flashbacks his troubled childhood (Matthew Illesley), adolescence (Kit Connor), and his rise to fame, as well as his subsequent descent into addiction. As we move back and forth through time, the various characters frequently break into song and sing their dialogue like a standard musical. We meet his less-than-maternal mother, Sheila (Bryce Dallas Howard), his cold and distant father, Stanley (Steven Mackintosh), and his rather wonderful grandmother, Ivy (Gemma Jones). We also see his early gigs with a band called Bluesology, his first break into publishing with Dick James' (Stephen Graham) company under management by Ray Williams (Charlie Rowe), who introduces him to lyricist Bernie Taupin (Jamie Bell), which develops into a lifelong friendship and one of the most successful creative partnerships in rock 'n' roll history. We also meet his second manager, John Reid (Richard Madden), who brings him to the heights of fame and becomes his lover, but who also facilitates his addictions and breaks his heart. Along the way, we get a lot of amazing songs. It's highly entertaining but also rather sad. Being a rock star isn't as fun as it's supposed to be.

Anna The tagline for Rocketman is "based on a true fantasy," and the film is a true blend of hard-hitting, nitty-gritty life moments and fantastical scenes set to Elton's iconic music. Egerton is a force in the role, playing Elton's insecurity and bravado from one moment to the next. His family life is rocky at best. His mother is a put-upon martyr, embarrassed by her son's flamboyance and frequent appearance in the newspapers due to drinking and drugging. Elton can't help but feel he's disappointing everyone around him—except perhaps his fans—and the larger-than-life person onstage is small and sad off stage. He's burned bridges without the intent of causing harm. When he takes on Reid as his manager, it's clear he let his heart rule, but unfortunately that left a wake of his loyal friends high and dry. When he laments to Reid, "Can't we just keep on Ray? He's such a nice guy," Reid's scathing tongue scolds him to remember that record sales aren't about friendships. Either trust him or fail. Elton is so enamored of Reid he can't get past it and follows him even when he's being used and abused, pleading for help but not finding any. It's heavy stuff. Luckily throughout, we know our hero comes through in the end. Elton is still kicking ass onstage, seemingly happy and healthy in the longtime sobriety he finally found.

Glen As dark as a lot of the film is, from a suicide attempt to a drug-induced heart attack, there are so many tender moments. When Elton as a young child listens to the radio and can easily pick out on the piano the notes he's hearing, we know he's a prodigy. When he takes Taupin's lyrics and finds the perfect melody, it illustrates the magic of creativity. When Elton gets his big break in the U.S. with a gig at LA's famed Troubadour, though he's racked with stage fright, he transcends it and quickly has the audience in the palm of his hand, depicted in the film's trailer as everyone being lifted off the ground. These "fantastical" moments remind viewers that the film is fictionalized. Many of the details, characters, and events are correct, but the chronology and other particulars are entirely invented, which frankly makes the film stronger. It's an impression of Elton's life. It's about his struggle with homosexuality, his estrangement from his parents, his rocky relationships, his handling of fame, and his eventual realization that his lifestyle isn't sustainable. One of his biggest fears is whether or not he'll be as good without the drugs and alcohol, which allowed him to overcome his fears and become a superstar. He had to kill Reggie Dwight to become Elton John, but he had to reclaim Reggie to regain and maintain his sobriety. The best part of the film for me was his relationship with Taupin, who had to put up with Elton's flamboyance, eccentricities, addiction, and bad behavior. He was the one person who was Elton's true friend, and that's a beautiful thing to behold. Both entertaining and inspiring, this one's worth seeing in the theater.

Anna We all need a friend like Bernie, whose unconditional love for Elton transcended the boozing, the diva-level tantrums, the crazy showmanship that the singer kept pushing further and further. He was always trying to remind Elton of what it was like before stardom hit, begging him to take a break, go home, get back to making music together. He was there when it all came crashing down, ready to help Elton pick up the pieces. The two obviously were in it through thick and thin—they still work together today. The music and musical scenes in the film are awesome. Beyond his time onstage, there are organic intros into the songs followed by fantastical imagery; it's a pretty great blend of fact and fantasy in my opinion. I like this director, too. Eddie the Eagle was a lot of fun, and Rocketman, while a different kind of "underdog" story, follows that lead. I'm a big fan of Elton John's music—who isn't, right? Rocketman gave me a glimpse into facets of his life and career I didn't know about, particularly his complicated relationship with family and his manager, who comes off as quite smarmy and coldhearted in this telling. I agree that this is one to see in the theater, so grab some popcorn and let the music overtake you. Δ