He was a parts manager down in Reseda, with a friend who made really cool guitars.

It was the 1970s. Gary Kramer couldn’t even play guitar, but he was about to begin a venture with future legendary guitar maker Travis Bean (his axes were favored by Jerry Garcia). It was a choice that would lead to Kramer’s becoming the business side one of the largest guitar manufacturers and would later take him down a dirt road to his own vineyard in San Miguel. 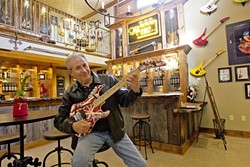 “I can’t play guitar at all,” Kramer said. “I have no dexterity. I’ve tried a thousand times. I have dreams about coming on stage and blowing everyone away.”

Still, Kramer felt the music and came of age going to see bands like The Doors in Los Angeles, back when people threw popcorn at them onstage. A month after he and the now late Bean went into business together, they were taking orders from the Rolling Stones. Kramer would go on to start his own company, Kramer Guitars, which became one of the largest guitar manufacturers in the ’80s, putting axes in the hands of artists like Bon Jovi, Eddie Van Halen, and Gene Simmons.

“Just about every rock star was rocking Kramer,” he said.

In 1989, Gibson bought Kramer Guitars. Later, in 2009, Kramer and his wife relocated to San Miguel, where their property that stretched out for acres was barren. Kramer had always been a whiskey and beer man, but he figured, when in wine country do as the wine country people do. 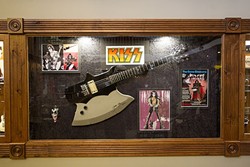 By 2013 he was sipping his first batch of syrah, and he liked it so much that he took his garage on Paso Robles’ Riverside Avenue, which was formerly used for storing vintage cars, rescued his collection of rare guitars from the man cave at home, and opened Gary Kramer Guitar Cellars just last month.

Upon walking into the tasting room, Janis Joplin soulfully croons “Take another little piece of my heart now, baby,” and a “Gary Kramer Guitar Cellars” sign glows in neon yellow letters above the bar. More than 50 rare and custom guitars in every color hang from nearly every available wall surface—there’s a white guitar signed by Gene Simmons of KISS by a photo of the rock star sticking out that infamously long tongue; Vivian Campbell’s black guitar with white lightning bolts; and a line of ergonomically correct guitars Kramer produced just 10 years ago. Each of the guitars is something Kramer had a hand in, whether they fall under the Bean, Kramer Guitars, or Gary Kramer Guitars era of his life.

The whole effect of Gary Kramer Guitar Cellars is warm, inviting, and just downright cool. Still, it feels more like a place to take a swig of Jack Daniel’s, but bottles of syrah are lined up behind the bar (along with olive oil made from olives on Kramer’s estate). Kramer’s something of a wino now. He, more than anyone, knows that not having a knack or predisposition for a particular thing doesn’t mean it won’t work out.

“It turned out to be one of the most incredible syrah’s anyone around here had tasted,” Kramer said. “Who knew Bean was going to show up one day with this beautiful instrument and it would take off?”

Ryah Cooley is rocking out at rcooley@newtimesslo.com.