I grew up on beer, brats, and polka music in Wisconsin, except I was too young to drink the beer, but that didn’t stop my parents from taking me along to the outdoor food and music festivals that popped up on weekends, which were great times to get together with the community and have some harvest season fun. 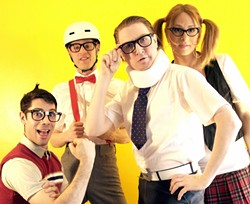 Now SLO Brew seems to be recreating this paradise of my youth, but with way better music! On Saturday, Oct. 13, SLO Brew will be host to Rocktoberfest from 11:30 a.m. to 5:30 p.m. in the SLO Mission Plaza, and your $22 entry includes a beer stein and two fills (or pay $10 with no stein). Kids younger than 14 get in free! All the proceeds benefit the Mission Lighting Project and SLO Safe Night. Thanks, SLO Brew!

Best of all, there’s a killer line-up of performers, with several shows aimed right at the kiddies. In the amphitheater, you can see Miss Heidi’s Music Time (a children’s performance), Ivan Ultz (also for kids), Spirits of Africa (a drum circle), Vance Fahie (of Resination), and Nina Ryne (also for kids). On the main stage, check out awesome ’80s cover band The Spazmatics, Gypsy jazz act The Red Skunk Band, and genre-jumping accordion-driven act Trio International, who will definitely be rolling out the barrels and giving me a chance to practice my polka dance steps.

It sure does warm the soul to see the young’ns keeping the bluegrass flame alive. It seems like such an old and antiquated genre to so many, who can only think of toothless English and Ulster-Scot immigrants sitting in the hills of Appalachia, whipping out fiddle-driven jigs and reels while stomping hillbillies buckdance on a plywood floor.

That ain’t the Get Down Boys, L.A.’s hipster bluegrass sensations who play hipster joints like the Kitty Martini lounge and The Escondite (Hideout!). They have super nice teeth and hole-free outfits, and they play traditional and original bluegrass along with modern songs infused with bluegrass style.

On Saturday, Oct. 13, they’ll come to the Red Barn Community Music Series under the auspices of KCBX Public Radio and the Live Oak Music Festival for a 6 p.m. show (come at 5 p.m. with a dish to share and enjoy the potluck; a $10 donation is requested at the door).

If you like bluegrass of any kind, you’ll dig their energy, foot-stomping rhythms, and inventive harmonies. The Red Barn is at 2180 Palisades Ave. in Los Osos, and doors open at 4:30 p.m. All proceeds from the show go directly toward expenses and the artists. BYOB.

In the same way the Brodsky Quartet set me back on my feet when I first heard them, The Pacific Quartet is a similarly virtuosic, exuberant group of performers unafraid of picking daring repertory choices and performing them with unbridled passion. On Saturday, Oct.13, you can hear for yourself when they appear at 8 p.m. in the Spanos Theatre as part of the Cal Poly Arts Beethoven Cycle Series—a six-recital/six-ensemble premiere cycle that will present Beethoven’s complete catalogue of string quartets in a series that spans the next two seasons.

“The Beethoven string quartets are to chamber music what the plays of Shakespeare are to drama,” Cal Poly Arts Director Steve Lerian explained in press materials. “Cal Poly Arts is thrilled to be presenting all of these epic compositions at the Spanos Theatre in a six-concert series over two seasons, performed by six different world-class ensembles—three from the U.S. and three from Europe.

“The Central Coast’s classical music-loving audience will have the opportunity to experience the entire arc of Beethoven’s life as a composer,” he continued. “We will hear the transition from his total mastery of the classical string quartet as developed by Haydn and Mozart and illustrated in his String Quartets Nos. 1 to 6, Opus 18, to the greatly expanded form and new degree of emotional sensitivity and drama of the Razumovsky quartets.”

Rock out with your c@#k out!

Ready for another heapin’ helpin’ of awesome sauce? Because you’re going to get it all over you if you come to SLO Brew on Saturday, Oct. 13 (7 p.m.; 21-and-older; $10), when AC/DC tribute act High Voltage returns to the club to lay down the law! These guys do not mess around when it comes to covering AC/DC hits. Lead singer Kelly Atwell freakin’ rules! His voice doesn’t quit. Lead guitarist Josh Blodgett will leap off the stage without warning! Rhythm guitarist and backing vocalist Alex Lacerda, bassist Damian Pamena, and drummer and backing vocalist Ray Rocha hammer out the hits like pros, and the icing on the cake is when bagpiper Paul Dunn comes out and closes this show, nay, this spectacle of rock-ferocity! These guys totally rule!

On Monday, Oct. 15, check out Drag the River (8 p.m,; all ages; $10), a Fort Collins, Colo., band that was formed as an outlet for a group of punk musicians who wanted to turn their attention to country rock. Very engaging material with raw, booze-soaked energy.

Starfucker hits the club on Tuesday, Oct. 16 (8 p.m.; all ages; $15 presale or $16 at the door), but New Times’ own inimitable arts editor Anna Weltner already told you everything you need to know about them on page 24.

Finally, on Wednesday, Oct. 17, Radical Something comes to the club with opening acts Wheeland Brothers and Louder Spaces (7:30 p.m.; all ages; $8 presale or $10 at the door) for an evening of feel-good Cali hip-hop and rock.

Steve Key’s Songwriters at Play showcases kick off on Thursday, Oct. 11, with headliner Amber Cross, who’s come back for an encore performance at the SLO Down Pub (6:30 p.m.; all ages; pass the hat). Known as “the little girl with the big voice” while growing up in Maine, her current style has been compared to an old Smithsonian recording. Guest performers include Roy Donkin, Sus Corez, Danielle French, Bobby Meader, and Jesse Owens.

Songwriters at Play has one final show cooked up for the week on Wednesday, Oct. 17, at Upper Crust Trattoria when Mare Wakefield and The Railflowers share the bill (7 p.m.; all ages; $10 at the door). Mare (pronounced Mary) is based in Nashville but is a frequent visitor to the Central Coast, with her Martin acoustic guitar and piano-playing husband (aptly named Nomad!). The Railflowers are a captivating trio of sisters from Chico, who blend soothing three part harmonies with guitar, banjo, and mandolin.

On Friday, Oct. 12, the Steynberg Gallery will be host to cello and banjo duo Jo + Sorcha for an 8 p.m. pass-the-hat concert. They mix jazz-infused harmonies with rootsy bluegrass to create a genre bending mash-up, with influences ranging from Nina Simone to Bonnie Raitt to Tom Waits.

Cal Poly’s 2012 Parent and Family Weekend will feature a musical showcase emceed by Music Department Chair W. Terrence Spiller at 8 p.m. Friday, Oct. 12, in Harman Hall of the Performing Arts Center on campus. Hear the Cal Poly Symphony, Cal Poly Choirs (PolyPhonics and The University Singers), University Jazz Band I, the Arab Music Ensemble, and the Cal Poly Wind Ensemble. Tickets to the recital are $12 and $14 for the public and $9 and $12 for senior citizens and students. Call 756-4849.

Bob & Wendy, NTMA Best Album of the Year winners, play Linnaea’s Café at 8 p.m. on Saturday, Oct. 13. “We will play songs from our 2012 New Times Music Awards Best Album, Your Beautiful Life, some new songs, and a few old favorites,” said Bob. “This is a free, all ages show ... perfect for young aspiring songwriters and cellists.”

L.A.-based act Sandbox plays Sunday, Oct. 14, at Last Stage West. “It’s going to be our last night of our fall tour, our third U.S. Tour of 2012, and our fifth time touring through Northern California in 2012,” said front man Shane Sweet. The group was also nominated for a number of honors at this year’s SPC Awards, including Artist of the Year, Best Lyrical Content and Song of the Year for “Streetlights,” and Hip Hop Song of the Year for “Holly Would,” and their drummer Daniel Rodriguez has been nominated for Drummer of the Year. The show starts at 6 p.m. and is free. Call 461-1393 for dinner reservations.

Get patriotic when The U.S. Air Force Concert Band and Singing Sergeants perform patriotic selections, Broadway tunes, and two world premieres in a free concert on Monday, Oct. 15, at 7 p.m. in Harman Hall of the Performing Arts Center’s Christopher Cohan Center at Cal Poly. The concert is free and open to the public; however, tickets are required. Call 756-4849.