Rolld is located at 785 Marsh St., and open noon
to 10 p.m. daily, and offers vegan and dairy-free options.
For more information on the ice cream shop's May 12
grand opening, go to rolldslo.com or
follow on Instagram and Facebook.

Any Instagram social media influencer will tell you: You cannot garner those coveted double taps without good content. The lighting may be just right, the hashtags accurate, the caption perfectly thought out. Still, you need a worthy subject.

Could there be a more worthy subject than everyone's favorite anytime treat: ice cream? If you ask Rolld owners Jacob Zachmann and Xavi Fajardo, the answer is actually yes.

There is something sexier than holding up a scoop of mint chocolate chip against a stark brick wall, allowing the pastel green globs to roll down your perfectly polished manicure (Valencia filter, of course). 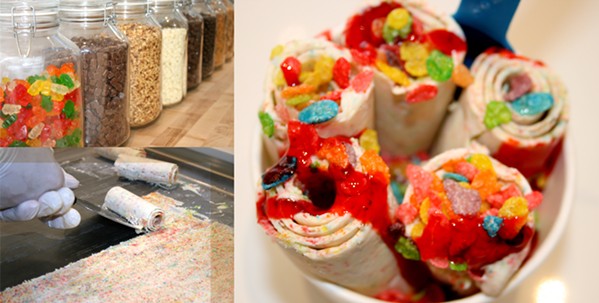 It's called rolled ice cream, and—if you're on Instagram in 2018—you probably already know it's "lit, fam."

Once seen exclusively on the streets of Thailand, and more recently, on the streets of foodie meccas like San Francisco and Brooklyn, this totally photogenic dessert has finally rolled its way into sleepy SLO.

But how does one roll ice cream? Why, by pouring a liquid ice cream base (dairy-free and vegan options are available) onto a very cold slab, mixing in ingredients like cookie crumbs, then smoothing out the concoction for a quick freeze.

Next, the magic happens!

I was able to witness the rolling process last week, surrounded by watchful trainees.

After freezing the base and chopping in a handful of multicolored Fruity Pebbles breakfast cereal, Fajardo grabbed a thin, metal spatula—quite similar to the tool I remember using to scrape bubblegum off the bottom of desks during junior high detention.

First he smoothed it all out, which actually looked like a lot of work. Then, he got to rolling (rather, scraping) multiple rolls from the freezing surface.

The cold, delicate curls reminded me of rosettes on a cake, but more tubular and tantalizing. Yes, rolled ice cream is beautiful; so beautiful, in fact, I whipped out my iPhone to capture just the right pic to share with my own IG followers (the response was immediate and positive).

Tucked into a perky cup, topped with rainbow sprinkles and adorned with glossy ribbons of strawberry syrup, I was reminded of a transformative makeup tutorial video.

Yes, there is an addictive quality to this performance.

Fajardo and Zachmann actually met through social media, so it's only natural that they'd offer up SLO's most click-worthy treat.

Both guys were early adopters of Instagram, and they used that novelty to their advantage. Way back in 2013, both millennials garnered millions of followers, which—at least for Instagram—is kind of like saying you were the first to land on the moon.

This gained major advertising attention, which led to monetizing their various accounts (mostly dedicated to memes, funny videos, food—you name it). At the time, Zachmann, a SLO County native, was living with his mom and figuring out his future. Although he had the resources to move out, most of his young friends did not have the dough to share an apartment.

Fajardo had just dropped out of the University of Connecticut to focus more on growing his own Instagram business. The guys had circled each other online, and they finally decided to partner together to see if they could fry some really big fish.

The idea was to snag this big client together. So, they flew to Washington, D.C., to make it happen.

"The client fell through, but if that meeting had never happened, we might not have ever worked together," Fajardo said. "It was winter, and all my friends were still in college. Here I was, at home, working, trying to grow this company. So I moved out to California and we got an apartment together. I was just like, 'Screw it!'"

Together, the new friends got to work building their online business empire, and five years later, they truly have created success for themselves. Of course, you can't put all your eggs in one #basket.

"I went to Philadelphia for a family vacation and we wanted some dessert. We had never even heard of rolled ice cream; we'd never tried it. I thought it was really good. I also noticed the whole experience was attracting attention; people were recording videos of the process," Zachmann said. "I texted Xavi that day and said, 'Hey, this is the next thing we need to do.'"

But what about the taste?

That's different, too. Traditional ice cream is filled with air. Those aren't fighting words, it's just the truth. Normal old ice cream is churned to create a creamier texture, and plenty of people prefer it. But rolled ice cream is denser because the base itself crystalizes into a true "slab" of delectable calories.

Remember the frozen yogurt craze? And then, acai? Well, chances are this will be the next big thing. Hey, these guys should know.

The best part? Even if you're cutting out sugar, or doing some crazy Whole 30 challenge, you can still get in on the action.

"It's just so satisfying to watch," Fajardo said. Δ

Hayley Thomas Cain can't roll her r's. She can be reached at hthomas@newtimesslo.com.