You don’t have to be a circus performer or cartoon bear to ride a unicycle. In fact, quite a few people play polo or hockey on unicycles. An even more select few, such as Morro Bay’s Mark Wilder, play basketball. 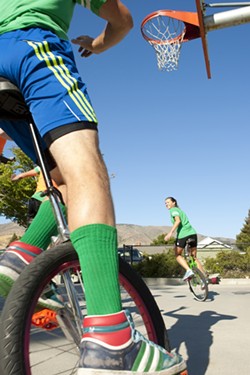 Wilder plays unicycle basketball for the SLO Ballerz, a club team that practices every week at Meadow Park near downtown San Luis Obispo. A professional unicyclist and juggler—yes, kids, such a thing exists—Wilder first played competitive one-wheeled hoops as a ringer for the Berkeley Revolution. He helped that squad win silver at the basketball event of the 2012 World Unicycle Convention (UNICON).

The Revolution fell to Le Woom from Lyon, France—unicycle basketball’s rich prep school team in the ’80s sports movie of life. Apparently, the French take “monobasket” more seriously than does any other nationality.

Wilder returned to the states after the UNICON championship loss with the idea of forming his own team in San Luis Obispo. The SLO Ballerz aim to field their own team at UNICON 2014 and to emerge as the top unicycle basketball club in California. Choosing a local rival hardly proved difficult since, by all accounts, the Berkeley Revolution remains the Golden State’s only other competitive club.

“We’re gonna give Berkeley a run for their money,” Wilder boasted.

The fundamentals of unicycle basketball mirror actual hoops. For example, a player earns a foul by spending more than three seconds in the paint or by setting a moving screen. Similarly, a player travels if she moves too far without dribbling the ball—two pedal strokes. “It’s the same thing if you think of the pedal strokes as steps,” Wilder said.

UNICON rules also limit the size of the wheel to 24 inches, which allows players to maneuver among each other in the post, but reduces speed in transition play. Basketball students would compare unicycle basketball to the slow-paced swing offense employed by some NCAA teams. As a result, the position options basically boil down to forward and guard.

“I’ve always been a juggler,” Hunt said. “I’m a pretty decent unicyclist at this point. Basketball is really my limiting factor.”

Hunt said the toughest learning curve in unicycle basketball involves playing defense. Although one would imagine the games would come out low-scoring because of the slower pace of play, the inability of a defender to change directions as quickly as someone on two legs means that all unicycle basketball teams play zone defense. Scoring opportunities often begin with a player wide open.

“If someone gets to your back, they’re gone,” Hunt explained.

Wilder said the club could field a full UNICON squad with its current regulars, but he wants to add depth. Playing any club sport in a college town means that some players will eventually move on from San Luis Obispo, so it’s important to keep restocking the talent pool.

The SLO Ballerz became co-ed with the recent addition of Jamie Relth, who’s already managed to recruit at least one other female player. Relth only learned the sport a few months ago, but already plays in scrimmages, though she still tends to hover around the perimeter.

“I think they’re being pretty generous letting me play,” Relth said. “Just learning to ride does not qualify you.”