Farmer Bill Coy reaches his suntanned arms up and into a sea of glossy orange-green leaves in search of a perfectly ripe avocado. Victorious, he palms the plump, bumpy black fruit, which gives way to the touch only ever so slightly.

“Avocados didn’t take off in California until the Hass was discovered,” Coy says, inspecting his prize in the bright sunlight. “Believe it or not, but when they discovered this avocado, it was growing in some guy’s front yard. That guy was a man named Rudolph. Rudolph Hass.”

In the late 1920s, that important mailman-turned-avocado-grower received a few seeds from a nursery that—unbeknownst to him—had been cross-pollinated by nature in a truly magical way.

As Coy puts it, “Hass planted the trees as an experiment, and there was this one particular tree ... friends and family kept saying, ‘You’ve got to do something with that tree.’”

Not only was the tree’s mysterious avocado bounty better tasting than the fuerte avocados Hass already grew, but it fruited remarkably soon after planting. There was just something special about its creamy texture and rich flavor.

I can tell that Coy relishes telling and retelling this story—the story of how Hass, and avocados in general, found their way into American hearts and homes.

“I just love talking about them,” Coy says unapologetically. “I’ve never found a product that has found so much acceptance as avocados.”

A slight coastal breeze tickles approximately 30 acres of avocado trees thriving on his temperate Cayucos farm, Rancho Rio Conejo. To get here, I traveled east on Old Creek Road, dodging everything from wild turkeys and rabbits to rogue cows.

Surprisingly, we’re only about a 30-minute drive inland from the Morro Bay Embarcadero, where the annual Morro Bay Avocado & Margarita Street Festival will soon be held Sept. 10 in a whirl of live music, guac, icy drinks, artisans, and vendors.

Coy knows about publicity; he’s a founding organizer of the now 10-year-old fest and has done plenty of outreach working with the California Avocado Commission. He’s also a retired ad man for JC Penney.

He’s well aware that this long-standing Morro Bay event—which includes a first ever Taste of the Grove dinner this year on Sept. 9—is the “newsworthy” point of the interview.

“It’s not about me; it’s about the festival,” Coy says. “I’m not special, really. I represent so many farmers who work tirelessly to cultivate this incredible crop.” 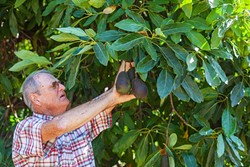 I can see where Coy’s coming from, but I do believe he’s got a fresh take on the area as both a farmer and a fervent evangelist for the crop. He truly enjoys shedding light on SLO County’s 130 growers, spanning 4,000 acres. He wants people to know that his story is their story too.

“The real story is this: The Hass avocados grown in this county are the best avocados anywhere,” Coy says. “They taste better, they [ripen] later. We just lucked out with the climate. This is the best climate for avocados in the whole damn state.”

While it might be 100 degrees in Paso or 60 degrees at the coast, the weather in this little slice of paradise tends to stay somewhere in the middle, making for remarkably mild growing grounds.

Coy and his wife of 50-plus years, Anne, purchased the sprawling ranch in 1979, along with Anne’s father, legendary farmer Bob Blanchard Senior (he happily worked these fields until his dying day).

The couple still remembers those early days, a time when avocados were deemed “exotic” and shoppers had to be trained to equate “black” with “ripe.” Coy says many agriculturists once balked at the idea of growing the trees on the Central Coast, so far from the booming San Diego avocado epicenter.

“They told my father-in-law that oranges wouldn’t grow here, either,” Coy continues. “So we grew them here anyway. He was the first guy to ever plant citrus in this county, and I helped him do it, in the early 1970s. Fifty percent of this ranch was oranges, and then it changed over to avocados.”

Now, surrounded by golden hills dotted with ancient barns, lazy cows, avocado trees, and 6 remaining acres of oranges, Coy can chuckle at what might have been.

Some trees are up to 36 years old; others are newly planted by his daughter, Julie Zamora, who also lives and works on the farm and takes care of many of the day-to-day tasks. We stop in front of a row of stumped trees. The bark is painted white, a stark contrast to the lush greenery.

“People always ask, ‘Why are those trees at Morro Creek Ranch stumped or painted white?’ That’s because you don’t have to water them,” Coy says. “People used to think you’d lose the roots if you cut them like that, but you don’t. They just go dormant.”

In 2014, Coy started to “suck air” on his wells, which are completely dependent on rainwater.

“We knew we were going to have a bad water year, so we made the decision to stump 7 acres,” he says. “We just stumped 2 more acres.”

Nearby, a cluster of once-stumped trees, about 2 years old, show abundant signs of life.

“You can see that they’re rejuvenated,” Coy says, adding that—thanks to strict conservation—he might not even need to purchase water this year.

As we meander through a row of 100 newly planted trees, Coy points out the grand sights: a 24/7 system that keeps the soil at the perfect pH and a wind turbine used to circulate frigid air in the winter.

It’s amazing to think that this all might not have been here if it wasn’t for the Hass avocado, the first commercial avocado to grow consistently, reliably. The one that really stole our hearts.

“Now,” Coy tells me with a twinkle in his eye, “it’s the only avocado in the world.”

Of course that’s not technically true: Although the humble Hass is said to be the source of 95 percent of all avocados grown commercially today, there’s plenty of flavors to savor.

Coy and his fellow local growers produce a diversity to choose from: There’s Bacon, Pinkerton, and cartoonish spherical Reed varieties—each has their own unique charm and all of which you can taste next month at the Avocado & Margarita Festival Sept. 9 through 10.

If public interest is any indication, the appetite for avocados isn’t drying up any time soon. Thanks to growers like Coy, the Central Coast crop is marketed across the country as premium and precious—maybe even worth its weight in gold.

As Coy likes to say and keeps on saying, year after year, “There’s just no limit to where these avocados can go.”

Hayley Thomas is all about “the good fat.” She can be reached at hthomas@newtimesslo.com.