“Rent, my amigos, is due,” Benjamin Coffin III trills into the phone, “or I will have to evict you. See you in a fewww!” His voice carries in Cuesta College’s pristine Cultural and Performing Arts Center. 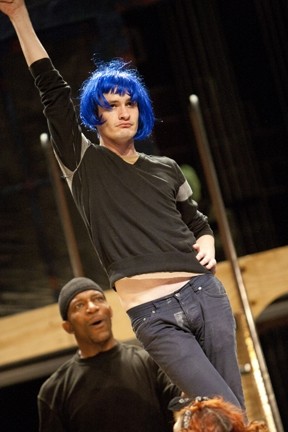 Benny, played by Nik Johnson, snaps the phone shut and shimmies down a ladder. The other end of the conversation, the squatters with whom he was once friends, erupts in a cascade of curses before launching into the frenzied title piece of the rock opera: “Rent.”

The squatters’ sentiment is one widely felt throughout every department at the community college, as state budget cuts threaten to diminish or terminate jobs. Around the drama department, rumors fly about the potential closure of the CPAC, the college’s state-of-the-art, $24.5 million performance space, which saw its first show in November 2009.

Administrators insist there are no plans in the works to close the space. But the cast and crew of Rent, under the direction of the spastically brilliant, capitalization-averse bree valle, already see their show as the drama department’s last hurrah at the CPAC. valle views the possibility of closure as “99 percent sure,” she said at a recent rehearsal. She’s already describing future semesters of renting out local churches.

“I certainly can understand why emotions would be running high,” said Marketing and Communications Director Stephen Gunsaulus. Between 9 and 14 percent could be cut from Cuesta’s annual budget of approximately $50 million, he estimated. “Those are pretty scary numbers.”

How that pain will be distributed is still under negotiation. Reducing the use of the new performing arts facility is a tentative possibility, Gunsaulus said. Closure of the theater may have been mentioned at a recent brainstorming session among academic leaders, but it was never put forward as an official proposal, he emphasized. Further, he went on, “We have had numerous discussions on the importance of the CPAC”—“we” being himself and Dean of Humanities Pamela Ralston.

Still, Gunsaulus went on, “there are plans being made that will reduce or eliminate assignments. There’s going to be a lot of people financially and emotionally hurt.”

Certain positions and academic departments may be combined, though at present, it’s unclear which ones. A May 11 board meeting should eliminate that mystery.

“It’s going to be bad,” Gunsaulus summed up. “I don’t know how bad. But there’s nothing good about this.”

At the May board meeting, Cuesta President Gil Stork will unveil the official plan to the board of trustees, but not before informing affected employees personally of the changes. At the June board meeting, the board will approve the budget for the 2011-12 school year, beginning July 1.

It’s a sad fact, but budget cuts are kind of dull. Job loss? Snore. Thank goodness for Rent, the sexy side of the story.

The problem is, the two sides are inextricably linked. Rent won’t be the CPAC’s last show, but it’s the last one before the uncertainty of cuts and layoffs, so it’s still treated as the drama department’s baby. Every cast member seems to have internalized a command to make his or her performance a damn good one, or else—as if to prove that the performing arts should be spared painful cuts. Opening night is Friday, May 6, five days before the dreaded board meeting.

Fortunately, the looming uncertainty translates brilliantly onstage. Cuesta’s Rent is energetic, ambitious, and raw. Brandon Pascal is a dream as the blue-coifed drag queen Angel. Johnson, in his role as Benjamin Coffin III, is by turns hilarious and sinister.

Director valle, already known for liberally dishing out constructive criticism, seems to have turned up the heat on this one—if that’s even possible. The musicians are instructed not to suck. The blocking is meticulous. The actors are challenged, and upon rising to that challenge, are challenged anew.

Even the smallest detail is ironed to perfection. A homeless woman urinating on the side of a building during the opening scene is coached in the action’s proper execution: “You’re taking a piss. Don’t you take pisses?” And to demonstrate, valle leaps onstage, pulls down her pants, and—protected by a mercifully long duster sweater—takes a proper stage piss.

But Rent is intense on another scale as well. In addition to the students who will operate the technical aspects of the production, a video designer, Robyn Hill, was hired to make the films for Rent’s independent filmmaker, squatter, and de facto narrator Mark Cohen.

Dierdre Loy, lighting and projection designer, was hired to operate the equipment that projects those films. A former student of valle’s, Loy moved back to the Central Coast from L.A. to work on Rent. Loy was awed by the electrical, sound, and lighting system in place at the CPAC, and was disappointed to see how little it was being used.

Of valle’s bombastic production, Loy said, “I don’t think she would choose to go full out if it wasn’t for the sake of really showing everybody what that theater can do. … We’re going to try to use all of the equipment available to the highest extent.”

At a recent rehearsal, the poor-but-sexy world of Rent—one inhabited by gay and bisexual twentysomethings living in New York City under the shadow of HIV/AIDS—came to life. The winter of ’89 was tangibly frigid. The threat of eviction haunted squatters Roger and Mark.  Even as Angel and Tom found happiness in each other, the prospect of untimely death—the eviction of the soul from the body?—was real. The opening scene’s repeated cry, “how’re we gonna pay?” echoed poignantly over 450 seats.

Every player seemed at the height of his or her game. Apparently, the cast’s long days were paying off.

Then an unimpressed valle chided, “That looked like a packaged rehearsal of lines that someone sent to you in the mail.”

And they did it all over again.

The importance of otherness

Rent, in the words of its director, champions “tolerance and acceptance, and fighting for the rights of homeless and homosexuals … for the rights of the ‘other’ in society.” And valle’s cast has been working tirelessly to do justice to that “other.”

While Roger and Mark, played by Jordan Michel and Greg Threlkind, respectively, hear they’re being evicted from their apartment by their old friend and former roommate, a romance blooms on the street below. Tom Collins, played by Jimmy Thornton, is mugged before he can get up to said apartment. Then, like an apparition, an Angel appears to help him, with whom Tom quickly falls in love.

It’s ironic, then, to note that the actor originally cast as Angel, Michael Corbett, quit the role several weeks into rehearsal, saying he couldn’t play a gay character.

“There were many points in which I came to the realization that I could not play this role,” said Corbett, who’s in his first semester at Cuesta College. “One of which was when I was going into the dressing rooms to change and another male cast member was putting on a bra and girl pants. I asked myself, ‘Why can’t I be that dedicated?’ The other was when I was asked to, while acting, fall in love with a man, which I couldn’t mentally do.”

What may have initially appeared an act of bigotry revealed itself as a mere artistic barrier, and Corbett’s realization underscored the difference between tolerating an “alternative” lifestyle and immersing oneself in it, between having a few gay friends and actually kissing another man.

But in valle’s productions, dedication to one’s “other” is a must. So the director reluctantly recast that fallen Angel as a homeless junkie. In an e-mail, Corbett described the new role: “I am a drunk schizophrenic. I blurt out crude, random, and out-of-the box remarks.” While uncomfortable in the embrace of another man, here was an “other” he could embrace.

Angel’s wasn’t the only role to be recast. The production’s former Mimi backed out a matter of weeks before the show’s opening for personal reasons. Fortunately, Hernandez, who had already committed Mimi’s lines and the musical score to memory (“I’d been paying attention in rehearsal,” she explained), stepped into the role—a steep promotion from a shopping cart lady.

The patching up, if anything, seems to have strengthened the fabric of the performance. Hernandez is on fire as the jailbait-y Mimi.

Spiller, too, is a killer Maureen. Her portrayal even garnered her a callback from the touring Broadway production of Rent.

valle’s students enter the lives of others when they enter the theater, dropping their own mannerisms and acquiring those of someone else. In class, they’re called by their characters’ names. “Otherness” is a thing the drama director speaks of fondly and often. valle describes the school’s drama and dance programs as “the things that provide us with opportunities to explore otherness.”

But when the budget cuts are finalized, valle worries, these otherness-exploring programs will be worst affected, and with them, her own teaching position. Gunsaulus, however, presented a less extreme view.

“Whatever bree is saying right now—and I adore bree—there is no official plan, and there are no official numbers,” he said. “There are so many rumors floating about, and she has every right to feel the way she feels.”

Rent presents uncanny parallels to the college’s real-life situation. Like the play’s artsy squatters, Cuesta faculty uneasily brace themselves for the boot. But the comparison deepens when you consider the title’s other meaning: “torn.”

Two voices tear at this page. There’s the calm voice of the school’s amiable marketing and communications director, Gunsaulus, whose job is to put the college in the most favorable light. Then there’s the shriller pitch of Cuesta’s dedicated, intense drama director, valle, who possesses a known flair for hyperbole, but has essentially nothing to hide.

Gunsaulus refused to acknowledge that the drama and dance departments would be any more affected than the rest, insisting, “No department goes untouched.”

Is the CPAC fulfilling its potential?

Most college performing arts centers of the CPAC’s caliber are used for more than student productions. Cal Poly’s PAC, while admittedly much larger, profits by hosting touring shows. But use of Cuesta’s facility is generally limited to school events.

“The fact that it’s not in operation for professional use is probably what’s killing it,” Loy observed. The lighting designer has worked in professional theaters as big and bigger than Cuesta’s, but claims none surpass the electrical and sound system in place at the CPAC.

Accommodating outside shows, however, would require stage hands, grips, sound and lighting technicians, and staff responsible for public safety. The CPAC has just one technician in charge of its equipment. That employee, Ronald Eminhizer, works part-time, and according to Loy, is still figuring out how to operate that equipment.

When asked about the possibility of garnering revenue from touring shows, Gunsaulus pointed out that the theater was built primarily for teaching purposes, with outside gigs a lesser priority. A seating capacity of only 450 means just breaking even could present a challenge, he added.

The drama isn’t over until that much-fretted-over board meeting takes place in early May. The school’s four divisions—the president, the administration, student services, and academic faculty—will submit proposals on how to reach that 9 to 14 percent. Their ideas will then be considered by Cuesta President Stork, who is responsible for the formulation of the official budget plan.

Rent opens with questions hanging in the air. It’s likely some positions won’t survive the rock opera’s six-performance run. By that final curtain call, those questions will be put to rest—barring, naturally, some unforeseen plot twist.