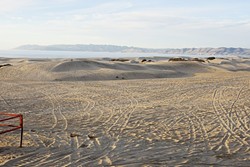 Within less than a week in early March, the APCD received a favorable ruling from a SLO County Superior Court Judge and, along with the California Department of State Parks and Recreation, was slapped with yet another lawsuit from an anti-dust rule activist group.

The dust rule, adopted by the district’s board of directors in 2011, was created to address the dispersal of particulate matter from the dune’s off-highway recreational vehicle area into the nearby Nipomo Mesa. The rule required State Parks to design and implement dust mitigation measures, imposed a timeline for the department to implement those measures, and also required State Parks to apply for a permit from the APCD as certain milestones were reached.

That was the subject of the most recent ruling on the lawsuit, made by SLO Superior Court Judge Charles Crandall on March 7. Crandall ruled that while the APCD must strike the permit rule, the dust rule itself could remain on the books.

“The district retains the power to enforce [the dust rule] through civil penalties and additional corrective action,” Crandall wrote. “The critical need for the rule remains. Accordingly, comprehensive air pollution monitoring can and should go forward as required by the rule.”

Crandall’s ruling means the APCD can keep the dust rule, according to APCD Director Larry Allen.

“It means everything will remain the same,” Allen said. “We have actually been enforcing the rule without the permitting requirement for over two years.”

The ruling could also impact another lawsuit filed by the Mesa Alliance Group against State Parks, which calls for a temporary ban on off-road vehicle activity at the dunes. Crandall is also the judge for the Alliance’s lawsuit—a good sign, according to Arlene Versaw, an Alliance co-founder and Nipomo Mesa resident.

“It’s an important win,” she said. “I think it’s very positive for our lawsuit.”

But the “win” for the APCD came just days after the Friends of the Oceano Dunes filed yet another lawsuit in SLO County Superior Court. The latest suit, filed March 4, challenges the exemption of dust monitoring stations, fencing, and other mitigation equipment from the requirements of the California Environmental Quality Act, or CEQA.

“As such, State Parks has exceeded its authority and abused its discretion by failing to proceed in a manner required by law and/or failed to support its determination with substantial evidence,” the suit stated.

The suit asks the court to order State Parks to comply with the CEQA process, and bar them from taking any further action until those requirements are met.

Lawsuits are not new for Friends of Oceano Dunes. SLO County court records showed that the organization filed three previous suits in 2012, 2013 and 2014. In fact, the group appears to spend the bulk of its funding on litigation and related legal expenses.

According to tax records obtained by New Times, Friends of Oceano Dunes, which receives some of its funding from donations, spent more than $161,000 on legal expenses in 2014, roughly 84 percent of its total revenue for the same year.

When reached by New Times, the group’s president, Jim Suty, declined to comment, stating in an email that the organization found New Times “not very objective.”