Plip, plop. One fat raindrop after another noisily drops into a bucket placed atop the reception desk at the San Luis Obispo Museum of Art on a particularly wet and windy day in January. It's not the first time.

"It's always like this, every time it rains," said Jody Kocsis, the museum's public relations manager. 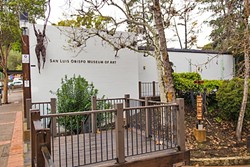 It is an old building, likely constructed sometime in the 1940s. It's been home to the museum since SLOMA (then the Art Association, which evolved into the Art Center and then the museum as we know it today) bought the building downtown on Broad Street in 1967. When the Art Association formed in 1952, there wasn't much going on in SLO, said Karen Kile, the museum's executive director.

"The city's progressed from that cow town," Kile said. "It's attracted young people who are entrepreneurs. The economy is booming. It's really quite a remarkable city."

But more than SLOMA's being stuck in an old building, it's stuck in a small building that it long ago outgrew.

Which is why in January, the museum announced a capital campaign to raise $15 million to build a new, bigger, and better art museum, hopefully starting with a groundbreaking in 2019.

Not the first go round

The museum is kind of a happening place in downtown SLO. It currently shows more than 20 exhibits each year (three or four can be seen hanging at any one time); has a variety of art classes for children, teens, and adults; and hosts regular events like Art After Dark and Art High Noon. When arts classes got cut from schools, Kile said even more students showed up for art class at the museum. 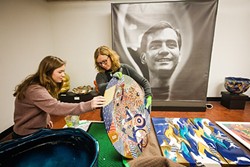 "Families come with crumpled-up dollar bills," Kile said. "They recognize the need for the arts."

The small, cramped-spiraling two-story building is well-used. But this isn't the first time museum officials have looked to expand the size and scope of their operation.

Kile, who has been with SLOMA since 1999, said a new building was on the radar when she started there. The museum was turning students away from classes because of a lack of space, and sometimes satellite locations were used to host events.

"It was maturing," Kile said. "I could see potential here and what we could be doing."

So throughout the early 2000s, the museum worked to raise money, commissioned a design by San Francisco firm Barcelon & Jang Architecture, and jumped through various hoops with the city of SLO. Then, early 2008 hit, and the writing of the recession to come was already on the wall. The museum's board had to decide: launch a capital campaign as people were losing their jobs or wait it out? 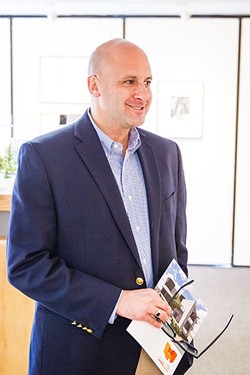 "The wise thought was not to, to park it," Kile said. "People still continued to give money to it quietly. I was instructed to not publicly promote the capital campaign and to keep this place in the black."

So the to-scale model of the new museum was moved from the gallery to Kile's office where it drew less attention, and life went on. Then in 2013, Howard Carroll, a local real estate investor who also happens to be the trustee of the Harold J. Miossi Charitable Trust, saw that business was turning around. It seemed like the economy was finally picking up and people had money to spare. He stopped by Kile's office one day and said he thought the time was right to kick off the campaign again.

"I thought the economy was returning and it would provide momentum for the downtown to change," Carroll said. "The trust wanted to make a difference for the community, and this would benefit not only the community, but the surrounding area."

With Carroll's help, the museum got a $1 million grant from the trust. A local family donated about $200,000 to the campaign. Things were starting to happen.

"It was the kick-off that we needed," Kile said.

In 2016, SLOMA decided it was time to get serious. Museum officials went on the hunt for a capital campaign director and ultimately hired on Jeff Al-Mashat, a former art professor with a background in the nonprofit world, in October. When Al-Mashat came in for his interview earlier that year, it fell on a day when the museum was hosting Art High Noon, where people gather with their lunches to discuss art. He was sold.

"Thirty people came in from their shops and offices, just to talk about art," Al-Mashat said. "That's amazing. I knew it was a very special place right from the start." 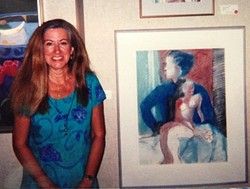 While the museum's featured artists may come from across the country, many are based right here in SLO. Local artist Gini Allen Griffin volunteered as a docent at the museum in the '70s when she was a student at Cal Poly, going on to serve as the board's president in the '80s. Today, her painting Double Doña is a part of the museum's permanent collection. When Griffin first moved to the area she knew all of the local artists; today she only knows a small number of them.

Elizabeth Tolley, an artist based in Cayucos, moved the to area about 40 years ago and became involved with the Central Coast Watercolor Society, which met at the museum. Through local connections, she met and worked with the man who would be her mentor, Scottish-born artist George Gibson of Los Osos (who moved here to be closer to his daughter), who worked as an artist for MGM studios in the '40s. In 2015, the pair's work was shown side by side in an exhibit at the museum called Masters and Their Mentors. 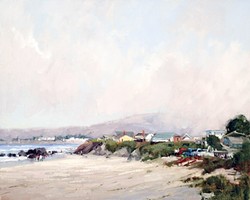 "He was one of the major California painters," Tolley said of her mentor. "I was a cling-on his whole life. I feel like I've grown because of the community supporting me. It's time. Our small town is growing."

Working with the already approved design, the new museum is set to allow not only more exhibits to show, but pieces that SLOMA currently can't accommodate—because they require temperature control or are simply too big to fit in the front doorwill also have a spot in the public art scene. The design for the new building is modern and sleek, reminiscent of the Cal Poly Performing Arts Center. It will triple the space for exhibitions and classrooms and feature modern lighting, climate control, and security. An elevator will ensure access for all (the current building's second floor isn't wheelchair accessible) and an art library will provide a space for scholastic research. The new space will also include a museum store and a cozy tearoom. Best of all, the new museum will sit on the same plot of land that SLOMA calls home on Broad Street. (And yes, that means the current building will be knocked down.)

"For some people this might be their only exposure to art," Museum Curator Ruta Saliklis said. "If we can do this here, imagine how much more we can do."

Once on the backburner, the capital campaign is now front and center on the minds of museum staff. The goal is to raise $12 million for the new building project with a reserve of $3 million, for a total of $15 million. With the $1 million from the Harold J. Miossi grant and other donations, Kile said they're at about 10 percent of the goal. Al-Mashat said they hope to raise $8 million by the end of the year and bring in the additional funds by the end of 2018. If all goes well, they plan to break ground sometime in 2019.

"People are excited about the prospect of us bringing shows here that currently you'd have to go to LA or San Francisco to see," Al-Mashat said. "It's going to be a game changer for the city. We want people to feel that there's always something happening at the museum, that it's a destination."

Ryah Cooley is soaking in all the art at rcooley@newtimesslo.com.