Rooting for Ukraine: Hear from a resident trying to raise money to help his family and friends in Kharkiv

Each morning when he wakes up, San Luis Obispo resident Slava Narozhnyi anxiously grabs his phone, loads the news, and texts his friends and family in Ukraine—praying that they've survived another day.

Narozhnyi's hometown of Kharkiv, Ukraine, is one of the hardest hit regions of Russia's recent invasion. Since the war started, bombs and artillery have relentlessly rained on the eastern city of 2 million people, destroying everything from its historic downtown to its residential neighborhoods, Narozhnyi said.

"It's a real nightmare out there. ... Every day I think it's the worst day ever, and the next day, it's even worse," the local photographer and videographer said. "I have friends I keep in touch with every day, and I can hear the fear in their voices. My friends say they go to the bomb shelter, and they don't know if they'll see the next day." 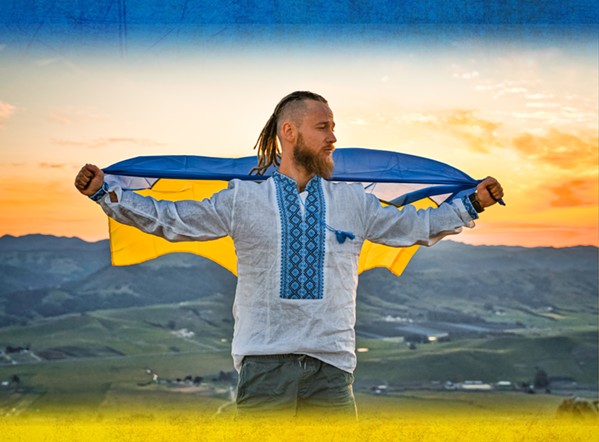 For Narozhnyi, who's 27, waking up in sunny, peaceful SLO, and not in Kharkiv, where he could help defend his city, is gut-wrenching. At home, his father is on the front lines of battle, enlisting in the city's territorial guard "on the first day" of the war. He also has his mother, uncles, aunts, and many other extended family members in Kharkiv.

"It's hard just to be so far away. It's the hardest thing I've faced in my life," Narozhnyi said. "They're all patriots. I'm so proud of my country, of the military, and all the heroism of Ukrainians right now."

Desperate to help from afar, Narozhnyi recently started a GoFundMe page to raise money for his family, and others in Kharkiv, who are struggling to get basic supplies like food and water. Russian military forces have all but surrounded the city and destroyed many of its roads and bridges, he said, making evacuations and aid missions extremely difficult.

"It's so dangerous just because they [the Russians] shoot the cars—they don't care if it's civilians or army," he said. "It's 50/50; some people can escape it and some people can't. It's not safe anywhere."

While Narozhnyi is thousands of miles away from the war today, he is no stranger to Ukraine's historic fight with Russia for self-governance. In 2014, when he was 20 years old and living in Kharkiv, Narozhnyi participated in the revolution that successfully toppled an unpopular president with close ties to Russia and its president, Vladimir Putin.

"The whole history of Ukraine, we've always been under pressure from Russia. People are fed up," Narozhnyi explained. "They [Russia] don't let us go. That's why it all started, because they don't let us join the European Union. They can't let Ukraine go."

During the uprising in 2014, millions of Ukrainians hit the streets to demand change. Dozens were killed in protests, including one of Narozhnyi's friends, who he said was shot in the back right next to him.

"At that time, our president was pissed off about it, so he threw the whole military on the civilians and just started a fight," he remembered. "The next day, even more Ukrainians came out to protect their friends, their freedom, and their rights."

Soon after the revolution, when he was 21, Narozhnyi moved to the U.S. as an exchange student. He wound up in SLO, where he decided to stay to pursue his passion for photography and visual arts. When Narozhnyi is not shooting local commercials, markets, events, and outdoor sports, you can find him surfing, climbing, and mountain biking around SLO County.

Narozhnyi told New Times that he appreciates the outpouring of support from Americans for Ukraine but hopes that the war is also a wake-up call to the U.S. that "freedom isn't free" and war could soon be at our doorstep.

"Lots of people think if the war's far away, it won't touch them. But this war is different," Narozhnyi said. "Everything now is in danger because everyone sees the evil right now in Europe. It's going to be dangerous for everybody, because this guy [Putin] won't stop."

Narozhnyi said he's in most disbelief when he sees the extent of the destruction of his home city, after just two weeks of conflict.

"You can lose your clothes or everything you own, you can buy it back, but build the city back?" Narozhnyi said. "This war will end one day, no matter what, but will they have any houses? Where are you going to start?

Narozhnyi hopes that SLO County residents see what's happening in Ukraine and feel grateful for what they have here. He also hopes that Americans can find inspiration in Ukrainians' unity, resolve, and courage.

"That's what I'm hoping for any country," he said. "In the U.S., the people are so divided and it's silly stuff compared to what's going on in Ukraine. I hope it's a wake-up call for everybody to get together. Only together are we able to make change."

To donate to Narozhnyi's GoFundMe for Kharkiv, visit gofundme.com/f/help-slava-aid-his-family-in-kharkiv-ukraine. Δ