The legislative push for ropeless gear in the Dungeness crab fishing industry is taking a pause after the Assembly bill's author was sworn in as California's 34th attorney general.

Authored by Assemblymember Rob Bonta (D-Oakland) in collaboration with Social Compassion in Legislation and the Center for Biological Diversity, the bill argued that fishermen use antiquated trapping gear that harms marine life.

Four days before the legislation was scheduled to go before the Assembly committee on Water, Parks, and Wildlife, Bonta became the state's attorney general. 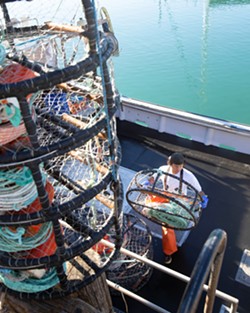 Steve Jones, a media specialist for the Center for Biological Diversity, said in a statement that the organization decided to withdraw the Whale Entanglement Prevention Act from this legislative session and try again next year.

"We were happy to see its author Rob Bonta promoted to attorney general, even though that complicated our efforts to move the legislation this year. But we still believe that converting California's trap fisheries to ropeless gear is the best way to prevent deadly whale entanglements and we will continue to advocate for that solution," Jones said.

Gov. Gavin Newsom announced Bonta's appointment to fill the position Xavier Becerra left vacant in March, after Becerra was sworn in as secretary of the U.S. Department of Health and Human Services.

California Coast Crab Association President Benjamin Platt said the Center for Biological Diversity "lobbied hard to find somebody else to carry that bill. They had nearly a month to find someone."

Platt said the nonprofit organization was unsuccessful in finding another legislator because the trap fishing industry mounted a strong opposition to the bill and ropeless fishing gear in general. Their coalition of support includes sport, commercial, and charter boat owners; seafood buyers; distributors; and some restaurant owners.

Platt calls the pause on the Whale Entangle Prevention Act a "David and Goliath moment for California fishers."

"For once we were able to convince the Legislature and the people involved in making decisions that the facts were on our side. This [ropeless] technology has been around since the '90s and it hasn't been adopted by any significant domestic fisheries or fisheries in the United States," he said.

The California Coast Crab Association's stance is that ropeless gear is impractical, a huge expense (gear is typically $1,700 or more), and the trap fishing industry continues to mitigate encounters with marine life with their own proactive measures—such as a gear loss recovery program.

"We're committed, fisheries in California are committed to try to get to the state's goal of zero interactions but its only been two years since that settlement agreement," Platt said.

Platt is referring to the Center for Biological Diversity's 2017 lawsuit against the California Department of Fish and Wildlife for failing to prevent commercial Dungeness crab gear from entangling, injuring, and killing humpback whales, blue whales, and sea turtles, thus violating the Endangered Species Act. The parties settled the lawsuit in 2018, detailing an approach to reduce entanglement.

"The Legislature needs to give the fishery and state managers the time to figure this stuff out," he said.

Even though the settlement's terms delayed last year's Dungeness crab season, the National Oceanic and Atmospheric Administration reported one humpback whale entanglement in California in 2020, compared to four in 2019 and seven in 2018. Δ