Rules or incentives? The SLO County Board of Supervisors is divided over affordable housing policies

Throughout an Oct. 4 SLO County Board of Supervisors hearing about the future of the county’s affordable housing policies, 2nd District Supervisor Bruce Gibson grimaced and tapped his pen impatiently on the dais.

The discussion was about what types of housing policies the county should pursue for the future, and Gibson thought the four-hour-long discussion was veering off course.

Instead of looking at regulatory tools that would boost the production of affordable housing, Gibson felt the board’s focus was shifting to making developers’ lives easier. 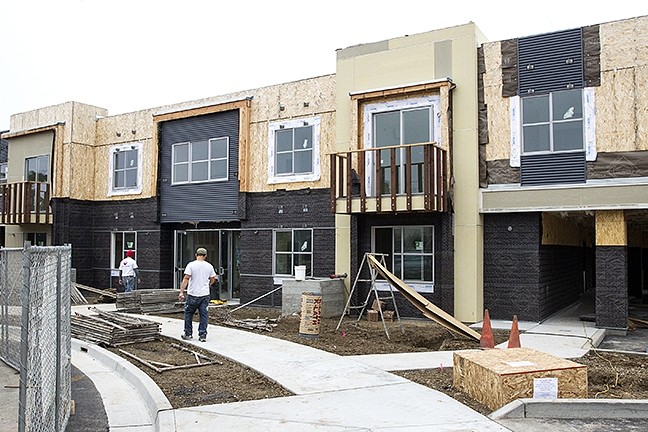 “This idea that if developers build more houses, the price is going to come down—I don’t think that’s going happen,” Gibson later told New Times. “The demand to live here is so high. We just cannot supply our way out of this problem.”

But three supervisors—4th District Supervisor Lynn Compton, 5th District Supervisor Debbie Arnold, and 1st District Supervisor Frank Mecham—disagreed with him. Their argument: If obtaining permits was easier and faster, if more land was made available, if building design guidelines were more flexible, and if fees were lower, developers could build more housing for less money, and that would bring down the price of homes.

The policy dispute is just the tip of the iceberg in the supervisors’ ideological differences on housing. And yet, not one of them argued that SLO County doesn’t have housing issues.

Several nationwide reports this year named SLO County one of the country’s least affordable housing markets. The median home price is $525,000 while the median household income for a family of four is $77,100 per year. That means a family earning the median income falls short of being able to afford the typical home in SLO County.

“We have a sick market. There’s just no other way to put it,” 3rd District Supervisor Adam Hill said during the discussion. “It can’t be cured with just supply alone.”

On Dec. 6, the divided Board of Supervisors took one small step in Gibson and Hill’s direction on the housing effort, voting 3-2 to bump up the fees that developers pay under the county’s Inclusionary Housing Ordinance, which provides modest funding to affordable housing projects around the county.

Doubling the fee from 75 cents per square foot of home to $1.50 per square foot, it was the first time the board opted to increase it at an annual review since the ordinance was adopted in 2008.

The aim of the ordinance is to put pressure on private developers to “include” affordable units in their projects. If they don’t, they pay an in-lieu fee that goes into an affordable housing fund. That fund is then distributed annually to nonprofit housing organizations, like the Housing Authority of SLO (HASLO), to support their affordable housing projects. The source of public money enhances their ability to leverage other funding sources.

While the board’s decision was quickly declared a victory for affordable housing, the fees are still thousands of dollars short of what the county planned for by 2017.

When the program rolled out in 2009, the plan was to increase the fee each year over five years. If the Board of Supervisors had followed that, the fees would be $3.75 per square foot today, or $7,875 for every 2,100-square foot house.

To add perspective, SLO city’s inclusionary housing program stipulates an in-lieu fee of 5 percent of the total cost of construction. For a $500,000 house, that’s about $25,000.

Scott Smith, the executive director for HASLO, told the board that a toothless in-lieu fee weakens the county’s inclusionary program.

“Without a meaningful in-lieu fee, you really don’t have a meaningful inclusionary ordinance,” Smith said. “It’s just too easy to pay a token fee and it’s over.”

“I equate this to a sin tax,” Compton said. “It discourages the whole market for homes.”

“The in-lieu fees are [often] coming off the backs of entry-level purchasers, workforce people,” she said.

Supervisors Gibson and Hill argued that the board should bump the fees up even higher than the $1.50, following the original schedule specified by the ordinance, but Supervisor Mecham only supported the one-step bump. Gibson then chided the dissenting supervisors and the Home Builders Association of the Central Coast, which opposed the fees during public comment.

“The thought that this fee suppresses production is not supported by evidence,” Gibson said. “The arguments are clearly about protecting the profits of the market-rate developer at the expense of poor people.”

Compton and Arnold said they see solutions in creating building incentives, rezoning land for affordable housing, and encouraging housing that is “affordable-by-design.” They were supportive of a “workforce” housing ordinance the board adopted by 3-2 vote in November that relaxes building design standards and lets developers forgo the inclusionary requirement for homes priced for buyers whose household income is between $92,500 and $123,360.

The political gridlock is likely to continue with the arrival of Supervisor-elect John Peschong, a conservative strategist who ran Arnold and Compton’s campaigns. He’ll replace Mecham as 1st District supervisor. In an interview with New Times, Peschong declined to share his opinion of the Inclusionary Housing Ordinance but said, “I’m usually not for programs that penalize one group of people.”

As the Board of Supervisors continued to clash over policy, HASLO’s Smith reminded them Dec. 6 that the waiting list for affordable housing is “years long.”

“Every month we have hundreds of people coming to our door who have horrible housing problems,” Smith told the board. “You send them to us to try to solve those, and we just don’t have the tools.”