Can you ever say it’s not a gorgeous day out in the vineyards when you’re wine tasting? Whether you’re trying to stay dry from the rain or cool from the heat, sitting back with a glass of wine while looking out on acres of green just sounds relaxing.

But don’t relax yet. Wait until after Sunday, June 2’s 20th anniversary of the Marianne Talley Memorial Fun Run. There will be a 5k and 10k run, as well as a one-mile walk, and a one-mile youth run for athletes 13 and younger. 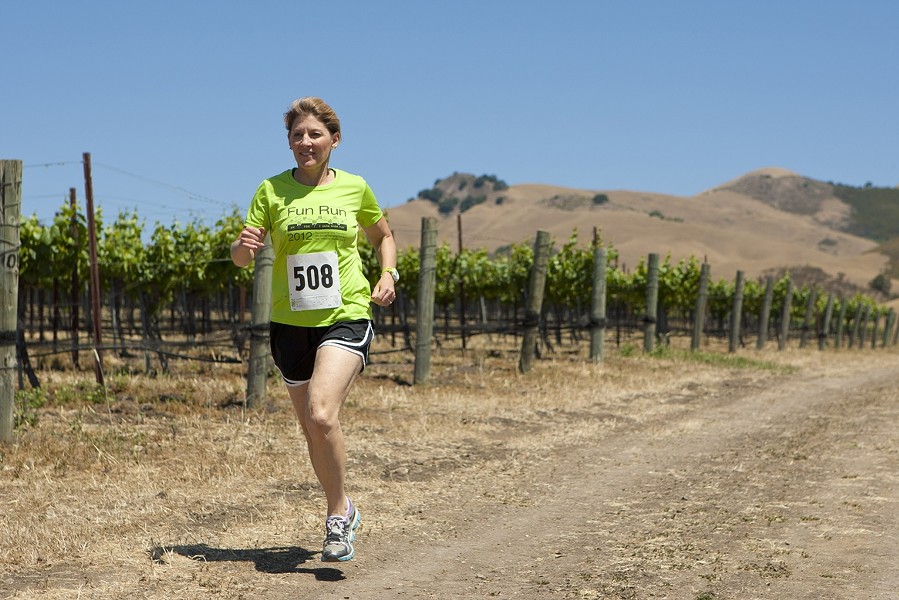 In honor of Marianne Talley, who died suddenly at age 25 in 1993 from complications associated with heart arrhythmia, this Fun Run was established to showcase her many athletic abilities and to provide college-bound Arroyo Grande High School students with scholarships.

Talley was an all-around athlete who competed in swimming, running, cycling, and triathlon events most of her life. She graduated from Arroyo Grande and went to USC, where she became an Olympic Gold Medalist on the swim team. She was a member of the SLO Roadrunners Running and Triathlon Club and had competed in the Ironman Triathlon in 1992. The latter is a swim, bike, and run event with a strict overall 17-hour time limit—with no breaks. It also has a set time limit for each category, and all participants must finish the race no later than midnight. The only promising aspect of the whole event (to me) is that it takes place in Hawaii. If you’re going to work that hard, you might as well make a weekend trip out of it to lie out on the beach with a piña colada served in a coconut.

But Talley wasn’t alone in her athletic pursuits. She had a lot of support from family and friends—and one friend, Marian Fiorentino, is now the run’s race director for the second year.

“Our goal is to reach at least 500 participants this year, and in five years we plan to have 1,000 runners,” Fiorentino explained.

As for the kids’ mile, “It is just the cutest thing watching those little 2- and 3-year-olds get their running start,” she added. “And the older kids take it very seriously when they run.”

Her first year as race director, she introduced the 10k run and the Eternal Timing time chips to provide accurate results for all races (except the one-mile adult walk, which is non-competitive).

There are three Talley Fun Run scholarships awarded: the Marianne Talley, given to a female athlete; Oliver Talley, awarded to a male athlete; and Don Talley, awarded to a student in leadership, be it FFA, government, or the like. All three awards, which add up to $197,000, are based on the same criteria: The student must have a GPA of 3.0 or better, and write an essay. The two athlete awards have one additional criteria: The student must also play two sports.

All runs take place on the dirt roads of Talley Vineyards, through the fields and vines. Pre-registration is open until noon on May 31. The entry fee is $30 for adults and $20 for youth; it increases by $5 on the day of the race.

The Food Bank Coalition is presenting a Hunger Awareness Day fundraiser on June 7 from 7 a.m. to 7 p.m. at 28 different sites in SLO County. For more information, contact Chief Executive Officer Wendy Lewis at 235-0919 or wlewis@slofoodbank.org.