In 2001, Cameron Clapp lost both legs and one arm - today he competes in triathlons and wins gold medals

As the sun sets over a track in Pismo Beach, a young man with no legs and only one arm is running.

His black, futuristic-looking legs make plunk, plunk, plunk noises as they hit the gravel, and what remains of his right arm jerks in time with his pumping left arm. When he gets to one end of the track, he stops and bounces up and down for a moment, his shaggy blond hair flashing in the fading light. After a few more passes in front of a set of bleachers, 18-year-old Cameron Clapp stopped to catch his breath and talk about his plans for the weekend. â€œMe and my twin brother Jesse are probably going out. Maybe call up some ladies,â€? he said with a grin in his teenage surfer-style drawl. 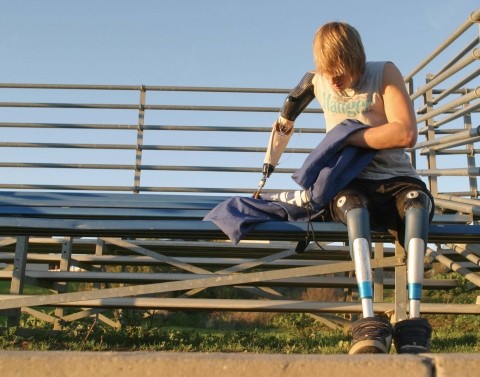 #In September 2001 â€” when Cameron was a popular football-playing, skateboarding, 15-year-old with all his arms and legs â€” his family lived on Front Street in Grover Beach, right across from the train tracks. Four days after Sept. 11, he and some friends built a candle memorial in his front yard to the victims of the terror attacks and then spent the rest of the night drinking heavily at parties around the South County. They got back to Grover at about 3 a.m., made themselves another round of drinks, and Cameron went outside to relight some of the candles that had blown out. As he knelt over them, he remembers wondering how the memorial would look from across the street.

When he got there, maybe he sat down to smoke a cigarette. Maybe he lay down and looked up at the stars as they spun overhead. Maybe he passed out. Or maybe he simply tripped, fell down, and hit his head. Nobody knows, and Cameron, to this day, canâ€™t remember. It doesnâ€™t really matter what the details are; what matters is that a train smashed into him about 10 minutes later.

The next year of his life was hard; and not just for him, for his parents, his step-siblings, and his own two brothers and two sisters. It was especially hard on his mom and his twin, Jesse. But there was, as his brother Dylan put it, some â€œtough love,â€? and Cameronâ€™s own independence. â€œItâ€™s Cameron, with his positive attitude, thatâ€™s kept everybody together,â€? Dylan said. But Cameron just shrugged off the compliment: â€œIâ€™ve just been being myself. My family is there for me, so Iâ€™m there for them.â€?

The first prosthetic specialist Cameron saw was a bust. He told the Clapps that their son would spend the rest of his life in a wheelchair, and maybe walk on special occasions: his wedding, graduation. â€œSo we bailed on that guy. Thankfully my parents didnâ€™t listen to him,â€? Cameron said. About a year after the accident, his stepdad found out about a company called Hanger.

â€œThey were the people that didnâ€™t give me any discouragement. They didnâ€™t tell me anything was impossible,â€? Cameron said. â€œAnd I just basically picked my feet up from there and everythingâ€™s been really good since.â€?

Good, but not easy. Cameron describes his ordeals with an offhand youthful lightheartedness, but listen between the lines and itâ€™s obvious how he struggled to learn to walk. First, Hanger created grooved, carbon-fiber sleeves that fit over his residual upper legs. From there, specialists attached stubby, knee-less legs to the bottom and Cameron took his first steps. For the next six months, he gradually increased the length of the legs, each time relearning his sense of balance, building endurance, and rebuilding muscles. By the time he was 17, he was ready for a â€œrealâ€? pair of legs.

Those legs are technological marvels. Each knee contains a computer chip that had had to be specially programmed for how Cameron walks before he started using them. The chips take a reading every 50th of a second and then adjust the hydraulically controlled fluid in the knees to match his gait, the angle of the ground heâ€™s walking on, and the way heâ€™s distributing weight from heel to toe. Thereâ€™s even a â€œsecond modeâ€? â€” a preset option that locks his right leg into a position where he can press the gas and brake pedals while he drives.

â€œ[The chip] really has its own mind. Itâ€™s not going to walk for me, but itâ€™s going to react to how Iâ€™m walking,â€? Cameron said.

By the time he graduated to new legs, he was ready for more than just walking. Heâ€™d been swimming since the accident and Hanger was able to create a â€œfinâ€? to fit on his residual arm. They also built mini-legs for him that let him use fins while he swims. And then there are his running legs, with their ultra-lightweight hydraulic knees and â€œcarbon-fiber sprint feet.â€?

For the past several years, heâ€™s run the 100- and 200-meter dashes and competed in swimming events at the Endeavor Games in Oklahoma, the Casco Bay Challenge in Maine, and a triathlon the Challenged Athletes Foundation puts on in San Diego. At the 2004 competition in San Diego, his all-amputee relay team beat a non-disabled team. At last yearâ€™s Endeavor Games, he took home four gold metals.

After he graduated from high school last year, Hanger hired Cameron to work as a â€œpatient advocate,â€? and up until last fall, he flew around the country â€” Chicago, Minneapolis, Tulsa, Los Angeles â€” educating doctors, nurses, and physical and occupational therapists about new products.

Thatâ€™s not all he does: He took a full load of classes at Cuesta last semester â€”â€œPassed all of â€™em, thank God.â€? He did some acting on an HBO show called â€œCarnivÃ¡lâ€? â€” â€œIâ€™m not allowed to say which character I play but itâ€™ll be on in the beginning of February.â€? And after a Swedish television station featured him in documentary, Cameronâ€™s been inundated with e-mail from around the globe â€” â€œLots from girls, too,â€? he said, raising his eyebrows.

All that doesnâ€™t mean heâ€™s stopped working out. A bone spur on his leg means heâ€™s not running as much as he used to, but heâ€™s regularly in the pool. Someday heâ€™d like to compete in the Paralympics, if organizers ever come up with a classification for him.

â€œObviously thereâ€™s not enough people in the world that run like me or swim like me,â€? he said, referring the fact that he is a triple amputee. â€œThere might be just as many people like me in other countries, but they donâ€™t do sports.â€?

As for the rest of his life, itâ€™s wide open. Most importantly, there are no regrets: If he had the chance to live his life over, he wouldnâ€™t change a thing. He points to the places heâ€™s traveled, the people heâ€™s met. His brother Dylan mentions the number of people and lives that Cameron has inspired and touched.

Back at that Pismo track, Cameron was still running â€” bits of rock spraying out each time his prosthetics hit the gravel. In front of him, the sun dipped into the ocean. He sped up, leaned forward, and stared at that flaming ball as if it was his future â€” as if he just ran fast enough, he could catch it, tame it, and ride it as it disappeared over the edge of the horizon.