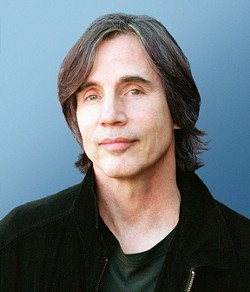 Somewhere there’s a painting of Jackson Browne that looks dreadful. That’s the only explanation for Browne’s Dorian Gray-like appearance. He’s turning 61 this year, yet he looks like he’s in his mid-40s! How can that be, especially considering his long and colorful career and life?

In his late teens he played with an early version of the Nitty Gritty Dirt Band. In the winters of 1967 and ’68 he hung out in Greenwich Village and backed Tim Buckley and Nico, who did an early version of Browne’s classic “These Days.” By ’69, he was well established as a songwriter, and Tom Rush, the Byrds, Linda Ronstadt, Bonnie Raitt, and many others began performing his songs.

Browne began touring as an opening act for Laura Nyro and Joni Mitchell and finally delivered his self-titled debut solo album in 1972, which contained “Doctor My Eyes,” which climbed to No. 8. He also co-wrote the Eagles’ first hit “Take it Easy.”

His fan base grew with each successive album, and by the time he released The Pretender in 1976, he was a big star. The album was drenched in sadness, the result of his wife Phyllis’ suicide two years after the birth of their son Ethan.

His 1977 tour delivered yet another top-selling album, Running on Empty, a concept album that featured new material recorded live on stage, in hotel rooms, and on the tour bus!

During the ’80s, Browne turned away from personal songs and began writing about sociopolitical themes, which mirrored his progressive views. It’s well known he was arrested during a protest of Diablo Canyon Nuclear Power Plant in 1979, which makes his appearance at Avila Beach on Tuesday, Aug. 18 somewhat ironic—he’ll be about a mile from where he was cuffed and carted away.

Jackson Browne performs at 7 p.m. at the Avila Beach Resort (doors open at 6 p.m.). There are reserved theater-style and table seating as well as general admission lawn tickets available for sale at all VALLITIX outlets including Boo Boo Records, the Mustang Ticket Office, and the Mid-State Fairgrounds Box Office; online at vallitix.com; by phone at (888) 825-5484.

Billed as “An Evening with Jackson Browne,” he’s touring internationally to support Time the Conqueror, his first studio album since 2002. The concert will spotlight material from the new album as well as career-spanning favorites. 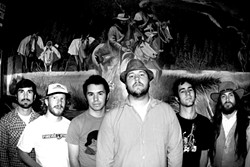 A shotgun blast of awesomeness

Kick off your week with Still Time playing an unplugged show on Thursday, Aug. 13 at Downtown Brew. I’ve had the good fortune of gathering ’round the old campfire (it may have been a gas barbecue … beer was involved) and listening to frontman Dan Curcio and company play acoustically. Expect an intimate evening of Still Time’s hooky Cali-folk. Benjamin Winter opens the all ages, 8 p.m. show ($6 presale or $8 at the door).

Downtown Brew turns up the volume on Friday, Aug. 14 when Threes and Nines return to the club for a gig with Too Late for Roses (all ages, 7:30 p.m., $6 presale or $8 at the door). The local trio has been in New York in negotiations for a record deal, so maybe they’ll have some good news for the crowd. Too Late for Roses is the phoenix that’s risen from the ashes of Instar. “This is our first time playing DTB, so come on out and make us feel at home,” requested Karl von Kries. Too Late performs rock and post-rock pop, with flute, pedal synth, and drum loops flavoring the bass, drum, and guitar of the trio. 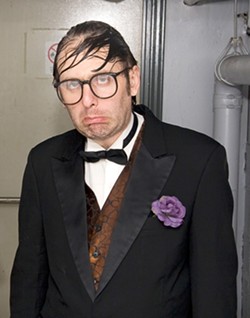 And now for something completely different! On Saturday, Aug. 15, DTB turns to comedy?!? Demented rock’n’roll comedian Neil Hamburger headlines an 8 p.m., all ages, $10 show with opening act Tim Heidecker of Adult Swim’s Tim & Eric Show. According to promoter Eddy Burgos of Numbskull Productions, “Zany shit will go down. This dude is seriously whacko.” According to his bio, “Despite his appalling comic timing, muddled delivery, and clichéd material, stand-up Neil Hamburger nevertheless emerged as one of the most acclaimed and name-checked comedians of his generation; like Lenny Bruce before him, he was a hipster icon whose trailblazing riffs defied conventions at every turn, transcending the confines of hilarity with kamikaze recklessness.” Check it out!

Take a couple of nights off and then head back to the Brew for hip-hop phenoms Arrested Development on Tuesday, Aug. 18 (8 p.m., 21-and-older, $20 presale or $22 at the door). The ensemble’s first single, “Tennessee,” blew hip hop fans away back in 1992 as it mixed the light, funky sounds of De La Soul with the folk-blues instrumentation of the band’s native South. The crossover hit went to No. 6 on the pop charts and No. 1 on the R&B charts. Venomous Voices opens this show.

J. Tillman of the Fleet Foxes goes solo on Wednesday, Aug. 19 when he plays an 8 p.m., all ages show ($10) with Sparrows Gate opening. If you like Nick Drake or Ryan Adams, check out Tillman, whose songs “paint languid, sadly beautiful portraits of love and life on the margins.”

Finally, mark your calendars for next Thursday, Aug. 20 because that’s when indie power pop quartet Hellogoodbye plays a 7 p.m., all ages show ($15). The emo rockers blend Nintendo bleeps with sugary sweet hooks to play their infectious brand of music. Fun. opens this show (and yes, there’s period after their name because the fun stops there).

Bluesy, rockin’ Kristen Black plays Thursday, Aug.13 at Sally Loo’s coffee shop from 5:30 to 8:30 p.m. “I’ll be splitting the bill with Matthew Green (Richard Green’s brother), and the show is a benefit for the Leukemia and Lymphoma Society. There will be art and photography for sale as well.” One hundred percent of the $5 cover goes to the Leukemia and Lymphoma Society, so feel free to donate more!

On Thursday, Aug. 13, Atascadero’s own The Belmores headline the next Songwriter Showcase at the Porch along with eight additional acts from 6:30 to 9:30 p.m. Hear original songs by up-and-coming performers for free! All ages welcome.

Roots, surf, and rockabilly await on Friday, Aug. 14 when Cadillac Angels play the Concerts in the Plaza from 5:30 to 7:30 p.m. in front of the SLO Mission. Frontman Tony Balbinot is hoping folks will bring some extra dough to buy Haunt this Guitar, an album he cut to raise money for the Children’s School on the Hopi Indian Reservation in Arizona. “This hibernatin’ economy of ours has made our efforts to help those kids out there on the reservation even more difficult than back in the good ol’ days of George W. Bush when CEOs were free to steal 401Ks and NOT go to jail,” said Balbinot. 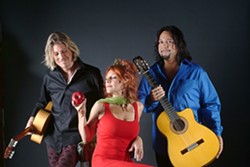 Crowd favorite Incendio plays the next Paso Robles Concerts in the Park on Friday, Aug. 14, from 5:30 to 7:30 p.m. The trio’s Latin guitar world fusion sound has been released on seven albums, and their international combination of music forms and exciting live performances create what’s been called “edge of your seat” music.

Atascadero native Marissa Bloom is holding a fundraising cabaret entitled “Modern Day Cabaret” on Friday, Aug. 14 at 7 p.m. at St. Luke’s Church. Bloom, a soprano, will be accompanied by pianist Stephen Tosh as she performs the works of George Gershwin, Cole Porter, Kurt Weill, and modern cabaret composers. Tickets are $15, available at Bloom’n’Grow Florist or marissabloom.com.

Punk rock returns to Mongo’s Saloon on Friday, Aug 14 with Bay Area surf-punk act No Captains and San Diego punks Sic Waiting. This 21-and-older show starts at 9 p.m. A $2 cover applies after 10, so get there early!

On Friday, Aug. 15, Green Acres Lavender Farm hosts a 7 p.m. outdoor concert with Stacey Earle and Mark Stuart ($20; call 466-0837). Earle’s the sister of her more famous brother Steve, and by the time she decided to strike out on her own as a songwriter, she was older than most novices. “I was 30 years old, and seeking a recording deal in Nashville at that age was like asking god to turn back the world clock,” she said. She eventually landed a staff writing position at Ten Ten Music, then met her husband and musical partner Mark Stuart. “I learned almost all the best of my musicianship from Mark, exploring a wide range of influences from blues to folk to rockabilly to country. Between the two of us, we had a lot to show and tell. We still learn from each other day in and out. A great songwriter and musician never should stop learning.”

Ode to Anthony plays the Frog and Peach on Saturday, Aug. 15 at 10 p.m. “We play everything from Jerry Lee Lewis and Ray Charles to AC/DC and Aerosmith,” said the band. “We’re high energy and always have a good time that we try to transfer to the crowd. Hope to see you there!” 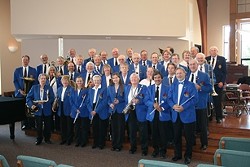 Step back in time with the SLO Old Fashioned Sunday Summer Concerts series on Sunday, Aug. 16 when the Burnished Brass Quartet and the SLO County Band play at the Mitchell Park Bandstand beginning at 1 p.m. Bring a lawn chair and picnic and enjoy this free show!

On Sunday, Aug. 16, trumpeter Don Rader plays the next Famous Jazz Artist Series concert at the Hamlet (4 p.m. for $15; 7:15 p.m. for $12; both shows for $20. Call 927-0567 for reservations). Formerly, Rader was the featured soloist with the bands of Count Basie, Woody Herman, and Stan Kenton. Central Coast stars Dylan Johnson (bass) and Darrell Voss (drums) will back him up, and as always, series co-producers Charlie and Sandi Shoemake (piano/vibraphone and vocals) will also appear. 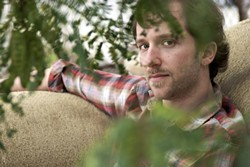 Instinct, the swank new club above Hoover’s, enters its second week of business with heavy hitter Devon Allman’s Honeytribe next Thursday Aug. 20. Taking a page from the classic rock songbook with original music influenced by the likes of the Rolling Stones, Jimi Hendrix, Cream, and the Doors, Devon Allman’s Honeytribe hit the ground running fast a couple of years ago with the release of Torch. The CD received great press from Guitar Player, Guitar World, Relix, Hittin’ the Note, An Honest Tune, and other publications. Locally, folks got a chance to see him open for his dad, Gregg Allman, at the Madonna Inn Expo Center. Criticnue opens the 9 p.m.,
21-and-older show. Visit nightclubinstinct.com for more info.

Glen Starkey is to music what thigh cream is to old women. Contact him at gstarkey@newtimesslo.com. 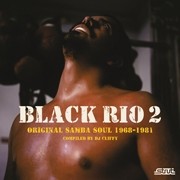 Outside of body waxing and soccer, Brazil is famous for its music. And while genres like samba, bossa nova, and tropicalia gained international attention and commercial success, other localized styles required the unified efforts of a handful of fans to bring them across the equator to wider listenership. Brazil’s Black Rio movement pinpoints a moment when the influence of American soul and funk cross-fertilized their rhythms as well as their self-identity. Here, on Black Rio 2, London’s DJ Cliffy assembles a collection of tracks that swing from outright funk replication to samba soul that bears minor resemblance to its American counterpart. Listen to Som Nossa’s “Pra Swingar” and you’ll hear immediate mimicking of Kool & The Gang’s oversized horn production, while James Brown is stamped all over the Cry Babies’ quick-paced version of “It’s My Thing.” But even when the tracks miss the album’s subtitled directive—the sunny, percussive bounce of Watusi’s “Oio Gere” seems authentically Brazilian—you can’t argue with the happy groove this collection will set you in. Squeeze it before summer’s last gasp. 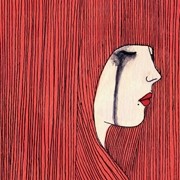 The theme of love—in sorrowing heartbreak and in glorious joy—has probably saturated more lyricists’ notebooks than one can care to imagine. So instead of writing anymore, why not just cover your favorites? That’s the idea two producers dreamed up when they hand-selected a crew of studio musicians to record renditions of slightly under-acknowledged gems. Whether Headless Heroes are tackling the fatalistic despondence of Jackson C. Frank’s  “Blues Run the Games” or the innocent optimism of Daniel Johnston’s “True Love Will Find You in the End,” the anchor to every song is the sonorous voice of indie-folk singer Alela Diane. Her elegiac delivery of Nick Cave’s “Nobody’s Baby Now” will leave nail marks in your skin as its undying mournfulness resurrects the memory of a lost love. Besides the odd-fitting orchestrated pop of “The North Wind Blew South,” this collaboration executes a strong performance throughout.