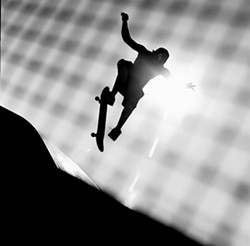 Few could look at the urban slopes of the Cayucos skate park and see the ancient, mystic forms of Teotihuacan’s pyramids of moon and sun.  Not every imagination is capable of transforming half-pipes, ramps, and bowls into concrete waves, gathering and massing the energy of youthful riders. But the fact that someone did harness the metaphor of this imagery is made less surprising when you view Arthur Tress’ previous work.

The photographer, whose work, “The Central Coast Skateboard Park Series,” will be exhibited at the Art Center through April 5, has fearlessly collected dreams, chased and captured shadows, composed a requiem for paperweights, directed an opera of teapots, and conducted a Fishtank Sonata. He was famous within the art world long before he moved from New York to Cambria, in 1992. But he has made a point of forging a new artistic path since he began working in the inexhaustible golden light of the Central Coast.

Tress first began photographing skateboard culture in 2003, after returning from a photography workshop (he was the teacher, not the student) in Mexico City. Upon his return, he found himself eating lunch near the pier in Cayucos when he was struck by geometric similarities between the pyramids he had seen in Teotihuacan and the shapes within the skate park, which he referred to as “abstract shapes, spiritual—sacred, geometry.”

He had formerly used his camera to document both Mayan and African tribes, and immediately identified the rituals, ceremonies, and sacred spaces of Third World tribes with the culture of the adolescent skateboarder. Even the likelihood of injury functions as a form of self-initiation, he explained, drawing out the metaphor.

“Young men and women come together and act out these ritual dances,” he explained.

So, he began visiting local skate parks—Los Osos, Templeton, Paso Robles, Grover Beach, and Cambria, along with a smattering of non-local parks, including San Rafael and Palm Springs.

For six years he photographed. He photographed the long shadows the skaters cast over the curved floor. Then he documented the construction of the skate park in Los Osos, fascinated by the shapes concrete could form. He learned new tricks to adapt to the pivots, movement, and grace exhibited by his subjects—holding the camera at the edge of his hand and spinning it as a skater glided past. This evolved into portraits of individual skaters, who were curious and surprised by his film camera, and impressed that he has printed work in Skateboard Magazine. To him, the athletes were Chinese calligraphy. A story developed, as it almost always does for him.

“I love making up a narrative. It was originally a kind of creation and destruction story. I had images of the skate parks emerging from the earth as they were being built.” Shadows flowed from concrete; skaters, in turn, emerged from shadows, beginning with arms and legs. As concrete forms increasingly dominated the images, there were new depictions of skateboarders—crashing.

“Most skateboards eventually break,” Tress said, by way of explaining his destruction myth. “Skateboarding’s kind of dangerous, even with a helmet. I’ve fallen a couple of times while photographing. And the concrete’s hard. I’ve been hit by many a flying skateboard. In skateboarding, a protective instinct that you pick up is your hearing. You hear the skateboards coming through the air. You learn to listen.”

Alongside shadow, concrete, and flesh, another theme emerges as well—art. One day, as a skater surfaced from within the bowl, flipping up his board to signal the conclusion of that particular dance, Tress noticed that there was a design on the board’s bottom. When new, the image wasn’t particularly captivating, but as it became worn and gashed with frequent use, its visual appeal increased. Yet again, Tress’ photographer’s eye made an unusual connection—between the distressed image on the skateboard, popping with primary colors and bleeding at the center, and abstract expressionist paintings. 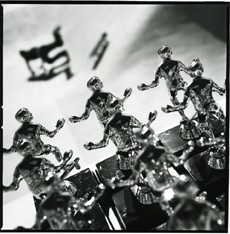 Surprisingly, perhaps, the photographer’s willing embrace of a Central Coast aesthetic has been met, and returned. His previous themes from his New York years included staged surrealist narratives, explorations of homoeroticism, and particular emphasis on the male form and rituals. But more recent projects place emphasis on organic forms within nature, curvaceous shapes, topics that he deems “more upbeat.”

“As you get older and more meditative you see the world a little differently and I can’t keep doing the dark surrealism. I’ve kind of done that, been there. I try to move in new directions.”

Local galleries and curators have responded enthusiastically; The Vault Gallery in Cambria sells more of his work than galleries in New York and Los Angeles. And part of the benefit of an increasingly tech-savvy society is that artists can live anywhere while maintaining access to the rest of the world. After all, the distance between Cayucos and Teotihuacan is more than 1,700 miles, but Tress managed to collapse that space with the single click of a shutter.

Arts Editor Ashley Schwellenbach is the love child of Dr. Seuss and Louisa May Alcott. Send your tales of wayward youth to aschwellenbach@newtimesslo.com.