Saddle up your Schwinn

California's past collides with a forward-thinking installation artist from Brooklyn

Brooklyn-based sculptress Amanda Browder is bad at sports. She litters bridges with 30-foot pencils, cuts square holes in gallery walls, and mobilizes artists to sweep the streets of Chicago, a rhythmic gesture of love and comment on the nature of gentrification and neighbors. And, in a San Luis Obispo first, on Nov. 7 she’ll be displaying a deviant—how else to refer to something that forces us to think?—mammoth sculptural installation at Cal Poly’s University Art Gallery.

The topic of her piece? The Missoula-born, Wisconsin-educated Brooklyn resident explores her feelings and associations with California. She first visited our fair state last summer, when she spent three months living in Los Angeles. Based on her brief golden-state fling and her own midwestern musings about the cultural significance of the West, and history, she created The Edenic Fault, a four-piece sculptural installation.

“In Montana we always get this sense of the West as the Wild West and cowboys and people coming there to start a new life,” she explained. “I had kind of gone west by living in Montana I had seen the buffalo and ridden the horses but somehow California was the next step, this perfect location where plants grew everywhere and everyone was happy and it was sunny all the time. I just wanted to conceptualize in an installation my interpretation of California.”

Browder is an anomaly even within an offbeat artistic genre she primarily works with fabric, fashioning strips of found fibers into cyclones, caves, and teardrops that people can literally inhabit. The appeal, beyond the thrill of constructing something unexpected from an equally jarring material, is her ability to shift scale.

After growing up in a space surrounded by mountains, Browder uses commonplace objects to remind people of the earth’s enormity, and even the significance of structures like buildings and bridges (hence the 30-foot pencil that she draped over a bridge). She searches for colors and patterns with a psychedelic edge, finding appreciation in the fact that her material won’t be molded into the conventional purse or fashion accessory. The coil of a quilt-like cyclone or length of fabric falling from a fourth-floor apartment window recalls the curvature of the earth—a view Browder recalls from atop the peaks of her Montana childhood.

Often the very process of acquiring materials is an act of collaboration for Browder, who has been known to post signs requesting neighborhoods and communities to contribute their unwanted fabrics to noble artistic purpose. For one project, a woman requested that Browder create an interactive installation in her garden the result was a mammoth splash of a teardrop that could shelter as many as three people on a freezing winter’s day. The space was also equipped with an electric blanket.

Then there is Browder’s long-time collaborator Stuart Keeler, with whom she is one half of a collective known as Career Day. Together their purpose is to challenge people’s perceptions of and relationships with ordinary spaces.

And last, but certainly not least, Browder contributes to Bad at Sports, a contemporary art talk site that features podcasts of interviews with artists. 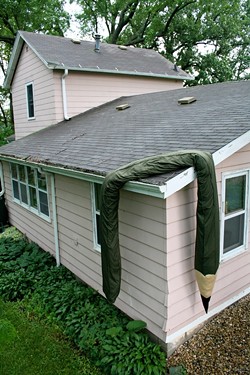 Browder describes the Chicago art scene as something of a do-it-yourself environment, so when her friends Duncan MacKenzie and Richard Holland asked her to participate she agreed, first as an interviewee and later as an interviewer. The group creates a new one-hour podcast each week, and when Browder migrated from Chicago to Brooklyn she became the NYC Bad at Sports Bureau Chief. The site is so popular, in fact, that correspondents hail from San Francisco, Los Angeles, Boston, London, and Europe.

Anyone armed with a map or basic sense of geography has probably deduced that San Luis Obispo isn’t exactly proximal to either Chicago or Brooklyn. Cal Poly’s new sculpting professor, Chris Walla—who curated the exhibit—met Browder while attending graduate school in Madison, Wisconsin.

The East Coast-based artist spent several months gathering and assembling materials in Brooklyn before arriving in SLO on Nov. 2, with a mere handful of days to complete her project. Several Cal Poly students were on hand to assist with the final stages of the installation, a hectic phase.

Working with students is hardly an unfamiliar experience for Browder, who taught at the Art Institute of Chicago before moving to New York and becoming a full-time installation artist. But she wasn’t always pleased with their interpretation of what it meant to be creative, particularly after she asked a class to explore methods of protesting the Gulf War only to learn that they were bored by the conflict.

“I just feel like, on the whole, the younger generations are more involved in consumerism than in culture, in consumerism as a push than in creating culture from other venues that are more artistic,” she explained. “‘Instead their creativity is based on the marketing structure of 18 to 35 and ‘I go buy all my independence at Urban Outfitters’, for example.”

This lack of original thought contributes to a tendency to fetishize history, Browder claims. She points to vintage clothing and obsession with historical periods like the Great Depression and the Gold Rush as an example of a cultural tendency to look backwards instead of focusing upon the future.

And—surprisingly, for an artistic genre that doesn’t generate vast quantities of cash—the recent plummet of everybody’s favorite buzzword, the economy, may generate a greater output of installation art.

“A lot of times what happens post economic downturn is you get more work that is architecturally based or installation based because there’s no money to buy art so we might as well make some funky stuff,” she explained. “Let’s cross our fingers. Maybe large-scale installation will become really cool. Who knows?”

In the meantime, while everyone’s waiting for large-scale installations to go mainstream, The Edenic Fault will be on display at Cal Poly, Browder’s very own madhouse interpretation of a historical display. Features include a 15-foot axe—possibly the very tool George Washington used when he chopped down a cherry tree—stacks of gold coins, a pile of boulders, and a sepia-toned photograph of Browder in colonial garb. The overall effect may be more eclectic than historically accurate, but Browder’s golden state is unquestionably a destination.

“It’s my interpretation of California,” Browder concluded. “And I love it.”

The Edenic Fault, a sculptural installation by Amanda Browder, will be on display at Cal Poly’s University Art Gallery Nov. 7 to Dec. 5. On Nov. 7 at 5 p.m. there will be an artist’s reception. The University Art Gallery is located in room 171 of the Dexter Building. For more information visit artdesign.libart.calpoly.edu/uag.php.

Arts Editor Ashley Schwellenbach has always wanted to swim in a pool of her own tears. Call her emo or Alice at aschwellenbach@newtimesslo.com.