But collision and fatality statistics indicate otherwise. Between 2011 and 2014, there were 11 bicycle deaths in SLO County, according to CHP data. SLO came in last place for bike fatalities and injuries among 92 California cities of similar size in a 2012 Office of Traffic Safety report. On Sept. 30, a local bicyclist was killed in a collision on Highway 1 near Cuesta College, when he veered away from the unprotected 8-foot shoulder and into a truck, according to the CHP. 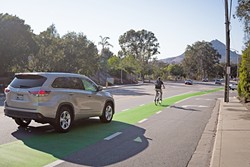 While some bike advocates say these statistics are lopsided because of the popularity of biking in SLO (7.4 percent of SLO residents commute via bike), as well as SLO’s close proximity to Cal Poly and its 20,000 students, nonetheless, there is consensus among bikers and local officials that the county needs to improve its bike infrastructure.

“There is political unity on this issue countywide, more so than we’ve ever seen before,” said Ron De Carli, executive director of the SLO Council of Governments (SLOCOG), which oversees transportation in the county.

“We want to zoom in, in detail, on every injury and fatality and talk about the actions that can be taken to prevent it,” said Dan Rivoire, executive director of Bike SLO County and a SLO City Council member. “The idea is identifying what behaviors lead to the most injuries and fatalities, so we can focus our enforcement actions and street designs on them. Meanwhile, we can backburner the ones that aren’t working.”

Rivoire said that active political engagement by the bike community has brought a variety of improvements to SLO’s streets over the years. Successes are evident in the green-painted bike lanes on dangerous stretches of California Boulevard, Santa Rosa Street, and Broad Street; in the complete redesign of South Street, where two lanes were eliminated and bike paths were widened; and in the many designated bike lanes created across the city.

City planners and traffic engineers are somewhat restricted in what they can propose for bike plans based on California regulations. Rivoire applauded the city for being a “bold leader” in pushing forward innovative engineering ideas, and he blamed funding limitations and “strangling” state road design laws for slow progress. For example, the green paint for bike lanes is a newly approved design that the city couldn’t use before for liability reasons.

“We’ve been wanting that for years and years,” Rivoire said. “But the state of California didn’t allow it because it wasn’t an approved design standard.”

Rivoire said that the fatal accident in September underscores the need to create more “protected bike lanes” that further separate bikers from fast-moving cars on many of SLO’s busy, arterial streets. Highway 1, Los Osos Valley Road, Higuera Street, Broad Street, and Johnson Avenue are all examples of high-volume roads, which can be treacherous for bicyclists. Rivoire hopes the city will capitalize on any opportunity it can afford to enhance bike safety infrastructure. Often, the change has to happen in sync with the pre-determined schedule for repaving and restriping roads to make it fiscally viable.

To add to the challenges, a critical source of transportation funding is drying up. De Carli at SLOCOG said a handful of projects that would fundamentally improve the biking infrastructure in SLO County have stalled due to a substantial decrease in state and federal funding. A SLOCOG Oct. 7 staff report reads that “state and federal transportation funding will decrease significantly over the next 10 years” creating a “$222 million gap in funding.” De Carli said the main source of these funds—the per-gallon gas tax—is diminishing as a byproduct of more fuel-efficient and electric cars. In 2014, SLOCOG was allotted $29 million for transportation projects. In 2016, it will only be given $6.3 million.

The overdue projects are a bike bridge over the railroad tracks connecting Cal Poly to downtown SLO; the completion of the Bob Jones Trail, aka the “City to the Sea” trail; a bike connector between Atascadero and Templeton, where bicyclists currently have to ride the 101; and a Morro Bay to Cayucos trail along the coast. The county will apply for competitive state grants for parts of these projects.

Other future plans include the Chorro Valley Trail, a multi-purpose trail connecting SLO to Morro Bay. The proposed trail would run parallel to Highway 1, separating bicyclists and pedestrians from a stretch of highway that killed almost one biker per year between 2003 and 2012.

In the coming weeks, SLOCOG, the Board of Supervisors, and city officials plan to gauge the public’s interest in becoming a “self-help” county, entailing a 0.5 percent sales tax increase to support transportation improvements. The tax would yield roughly $25 million per year and allow SLO to operate more independently from state and federal support to advance its backlog of road and bike projects. If the public does not support the tax hike and SLO’s typical funding doesn’t materialize, bike projects will most likely be stalled. De Carli emphasized that despite the obstacles ahead, SLOCOG and the Board of Supervisors are unanimous in their support of projects that make SLO a safer place to bike.

“We’re not quite certain how were going to address this [funding gap],” De Carli said. “The plan is to do pieces where we can and start completing the puzzle. But the whole issue is really based upon funding. And that’s where we stand.”

Rivoire, an avid biker, ultimately hopes the statistics do not discourage people from riding their bikes in SLO.

“Our community has a really great place for bike riding,” Rivoire said. “It’s very difficult to look at the statistics with honesty because they aren’t measured in a qualified manner.”

“We have one of the most attractive places in California for biking,” Gower said, encouraging bikers to obey traffic laws, wear bright clothing, and watch out for distracted drivers.

Editorial intern Peter Johnson can be reached at pjohnson@newtimesslo.com.