Sally Loo's Wholesome Cafe and its new grab-and-go window is open daily from 6:30 a.m. to 3:30 p.m. For more information, go to sallylooswholesomecafe.com or follow the business on Instagram @sallyloos.

Most grab-and-go food procured from a window is not, indeed, "wholesome." You might expect a mess of late-night tacos, a grease-soaked bag of fries, or that long-awaited cheat-day milkshake, but perhaps not a freshly made organic blueberry muffin and a hot cup of locally roasted espresso with almond milk latte art.

Even in SLO—where fast food drive-thrus are banned—there is one window open. It's a walk-up window, but hey, it still serves the same purpose. Get in, get out, and get on with your life. 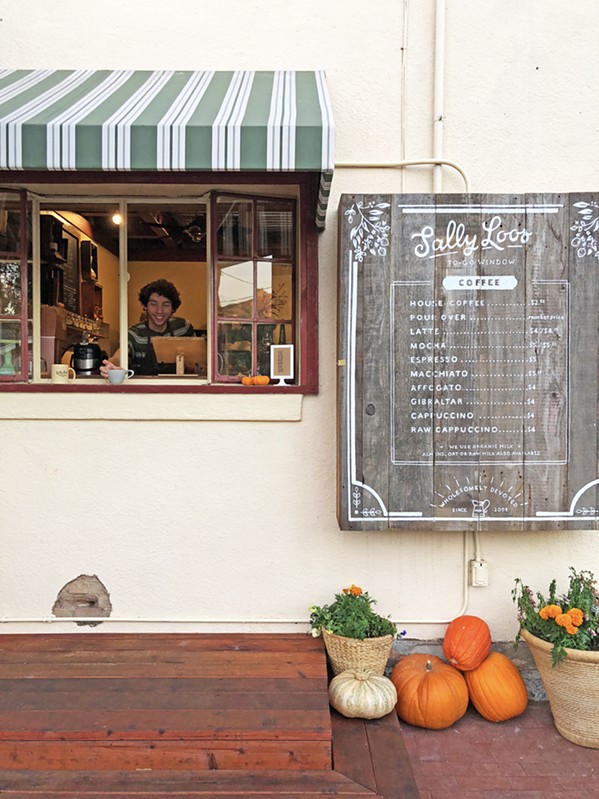 Yes, Sally Loo's Wholesome Cafe, known for its elaborate, farm-fresh breakfast and lunch offerings, quirky art on the walls, and third wave coffee, is aiming to make your morning commute a little tastier and a whole lot quicker.

A full menu of coffee offerings and baked goods made in-house are now available at the new grab-and-go window located just outside of the 1804 Osos St. location.

Owner Jen Fullarton should know a thing or two about the need to get caffeinated and get going. You could say that her move from LA to SLO can be credited to the mind-numbing nuisance that is rush-hour traffic.

"I was working in market research after business school and didn't like my job or commuting from Santa Clarita to Studio City," she said of the major relocation to come. "My commute was 45 minutes, sometimes an hour each way. Life is too short to spend it sitting in your car."

As the 24-year-old considered what she'd rather be doing with her one precious life, a reoccurring dream surfaced.

"I knew, deep down, that if I really did what I wanted to do, I would work in a restaurant and cook, but I had no experience at all. I also always dreamed of owning a coffee shop, too. I fell in love with coffee at 16, when I was able to drive myself around and visit different shops; that was what my friends and I did for fun," she said.

Romance initially brought Fullarton to SLO, but she stayed for the strong sense of community and foodie allure. A fortuitous meeting with Kendra Aronson, local author of the SLO Farmers' Market Cookbook, set the soon-to-be SLOcal on the right path.

"She recommended I talk to Sally Loo's; I already loved Sally Loo's, so I went for it. Two weeks later, in October 2016, I had put in my notice at my old job and planned to move to SLO," she said.

The Manueles, who have since moved to South Carolina to try their hand at homesteading, were known for harboring strong relationships with local farmers and artists.

"Sure it was a leap of faith for me, but they had faith in me; and it was crazy for them to hire me on," Fullarton said, adding that she met one of her best friends, Hope Scott, in the kitchen (chef Scott is still working in the kitchen).

It didn't take long for ambitious Fullarton to evolve from line cook to a more of a manager. She even rolled out a short-lived after-hours menu and experimented with bringing in local wine and tapas.

"I came up with this little business plan and had all these new ideas for the future of Sally Loo's," Fullarton said. "Jen and Brandon were like, 'Wow you really love this place. Do you want to buy it?' I said no at first, but then I thought about it for one day and realized, wait—yes, yes I do!"

On Nov. 1, 2017, about a year ago, the one-time employee purchased the coffee shop and hit the ground running. Changes were made to staff, a new coffee roaster was brought in (Cacti Coffee Co. owned by local coffee guru Shawn Clark) and a new baker was hired. Grain bowls and avocado toast were added to the menu. Fullarton brought in a fresh pair of eyes to work on efficiency in the kitchen.

Even though much has changed behind the scenes, the new owner said she's worked hard to keep the classic Sally Loo's ethos alive: quality first, even when it seems crazy.

"I always liked the young, passionate staff at Sally Loo's, and obviously the Manueles built the shop on sourcing locally and caring about the customer and what's on their plates," Fullarton said, adding that it's been inspirational to go out and visit with area farmers from Santa Ynez to Paso Robles.

As she likes to tell people, "I never knew it then, but going to farmers' markets would become a huge part of my job."

Yes, there is still more to be done.

"Coffee" is more than "coffee" to this go-getter, and Sally Loo's was never just a "coffee shop" to her. It was, and is, a meeting place and a home.

When it comes to keeping Fullarton's customers caffeinated and happy, there are no limits to what she'll do.

"We are making Sally Loo's a better experience; keeping the quality and customer service high, but also making sure our customers feel even more cared for than before," she said. "Whether it's a free coffee refill, more seating, or simply the shorter wait time, we want to show that we truly care." Δ

Hayley Thomas Cain cares very much about her daily coffee (which she actually drinks all day long). She can be reached at hthomas@newtimesslo.com.