Central Coast farmers are looking for an answer to labor shortages, and U.S. Congressman Salud Carbajal is determined to give it to them.

The Santa Barbara Democrat held a roundtable with farmers and other local representatives of agriculture in San Luis Obispo on Dec. 2. He was there to discuss the Farm Workforce Modernization Act, a bill that recently passed the House Judiciary Committee, 18-12. It now awaits consideration on the floor of the House, where Carbajal said it's currently receiving broad bipartisan support—26 Democrats and 23 Republicans. 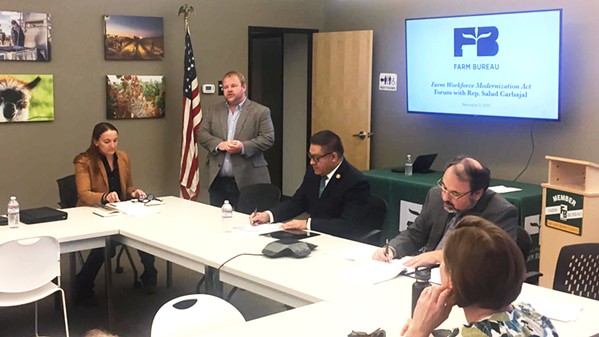 Carbajal described the labor element of the act as a "restructuring" of the H-2A guest-worker program already in place. He called the current system—which restricts employment to seasonal labor and requires several stages of applications and paperwork—"onerous."

The House bill would seek to bring in more guest workers and would dedicate 40,000 green cards to doing so. Carbajal hopes it will hit the floor early next year.

First the legislation would allow workers, whether they're already in the country or not, to obtain legal working status. But it would also allow them, down the line, to apply for permanent residence, also called Lawful Permanent Resident status.

"Democrats usually pursue the ultimate, which is citizenship," Carbajal said. "Republicans are always reluctant to go there."

While some sectors, like dairy, have a steady need for labor, other types of farming—including the Central Coast's specialty crops of strawberries and wine grapes—don't. That fluctuation means a need for seasonal laborers, who may not always be available on short notice. Brent Burchett, executive director of the San Luis Obispo County Farm Bureau, said that there's consensus from area farmers about the need for a more consistent flow of labor.

"It's something every farmer wishes they could get stability on," he said. "I hear it repeatedly that we can't get enough workers."

Many farmers find the H-2A program limited, Burchett said, and say that it prevents them from hiring workers based on sometimes unpredictable needs. But the Farm Workforce Modernization Act aims to streamline the process. Carbajal said it would reduce the paperwork down to one form, allow workers to stay year-round for growers who need more than seasonal labor, and grandfathers in workers and their families who are already in the country.

"The bigger piece is we have a lot of workers who are ready to come here that we can't physically process," Burchett said. "I think a lot of this is a challenge not unique to agriculture, and any time you have a tightening in the labor market, you see that trickle down to agriculture."

At the roundtable, Burchett and area farmers expressed worry that the bill has an uphill political battle. While it enjoys bipartisan support in the House, Carbajal stopped short of promising anything in the Senate. He said he expects there will be Republican senators willing to back the bill, but it's coming into play during an election year that's expected to widen already deep partisan divides.

"Farmers are going to continue to have problems with labor. This won't be a magic bullet," Burchett said.

But Carbajal said this bill could be a small step toward immigration solutions and could represent a blueprint for other bills serving other industries. He said he's already heard interest from representatives of the retail industry.

But the key to this bill, he said, is to get something, anything, through that farmers can use.

"Is it a perfect bill? No. Is it a good bill? Yes," Carbajal said. "Perfect is the enemy of good." Δ