Harry's Night Club and Beach Bar first opened in the 1950s, hardly noticeable among the dozen or so other bars sprinkled throughout downtown Pismo Beach at the time. A lot has changed since then—shirt shops and hotels stand in the spaces that many of Pismo's long-closed bars once claimed, and Harry's ownership has changed hands several times over the years—but the actual structure and interior of Harry's has largely remained untouched. 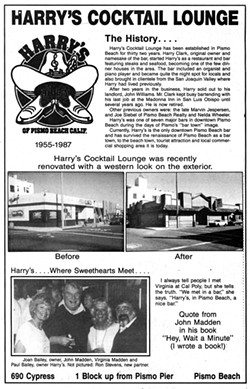 When the COVID-19 pandemic hit in March 2020, putting live music and indoor dining on hold for more than a year, current owner Mike Frey used the unusual series of events to his advantage.

"The closure offered us an opportunity to make some repairs and upgrades that we otherwise would have never had an opportunity to do. We're taking the ultimate lemons and making them lemon drops," Frey said with a chuckle.

Harry's is getting a serious renovation. First there are the structural repairs—old water lines and electric wiring in need of replacements and updates. Then there are the long awaited cosmetic changes, including all new seating and tables. Frey, a Bakersfield resident who purchased the Pismo Beach staple in 2014, assured New Times that Harry's beloved bar and dance floor will be essentially unchanged, and the establishment will still be home to two pool tables and the same general divey aura.

"It's just time for a refresh on some things," he said.

The last major renovation at Harry's was in 1987, when then owners Paul and Joan Bailey outfitted the building's once bland exterior with its still existing Western-style siding and shingles.

Effie McDermott, a local historian who wrote a book detailing the history of Pismo Beach and its people, said it was the Baileys who truly put Harry's on the map, through aggressive advertising, live music, and Paul's reputation for eccentricity. Paul, who often wore layers of expensive jewelry and drove a Rolls-Royce, made the LA Times in 1995, after he was elected mayor of Pismo and sued the city for roughly $10 million over claims that the then police chief had unfairly targeted Harry's in a drug trafficking investigation.

City leaders at that time wanted to put an end to Harry's. Now, McDermott said, it's the only bar from that era still standing.

"The new hotels and restaurants serve cocktails and have cocktail lounges," she said, "but Harry's is the one true 'bar,' with live music, dancing, pool, motorcycle parking by the front door, and that an occasional horseback rider has come in the door."

Recent work on Harry's started almost immediately in the spring of 2020, but Frey said it's not clear when it will be finished and the bar reopened. He's gunning for California's June 15 reopening date, but, with a lot left to do, he's not too optimistic.

That leaves locals and tourists alike without any Harry's for the time being, partly because Frey also closed his pandemic-era outdoor venue, Harry's Corral, in early May to put all his focus on the ongoing renovation. The Corral, which was located outside the Pismo Beach Hotel, was one of the few outdoor live music venues available in South County throughout the most recent months of the pandemic.

"So that was nice to be able to have something for the employees to do and some place for the visitors who missed Harry's so much," Frey said.

Now, in the meantime, Harry's is selling some of its old furniture, from bar stools and booths to barrels.

"We're just looking forward to getting back to being open as quick as we can, and very soon we'll be reaching out to the musicians," Frey said. "Those are the folks I feel the sorriest for during this thing, because they've been really shut out of their livelihood."

• After more than a yearlong closure, the San Luis Obispo Children's Museum announced on May 18 plans to reopen to members and the general public. Two sessions are being offered Wednesday through Monday, from 10 a.m. to noon and 2 to 4 p.m. Guests are required to wear masks while visiting, and capacity limits are being maintained at 25 percent to ensure social distancing is possible. Reservations are required for attendance and can be made at slocm.org/reserve.

• Water Systems Consulting recently made Inc. magazine's list of Best Workplaces in 2021 for the fourth time. The San Luis Obispo-based water engineering consulting firm is the only local company that made this year's list. Δ