While elected officials from across San Luis Obispo County filed into Grace Central Coast in SLO to attend a regional housing summit on March 22, a group of local residents huddled outside in protest. 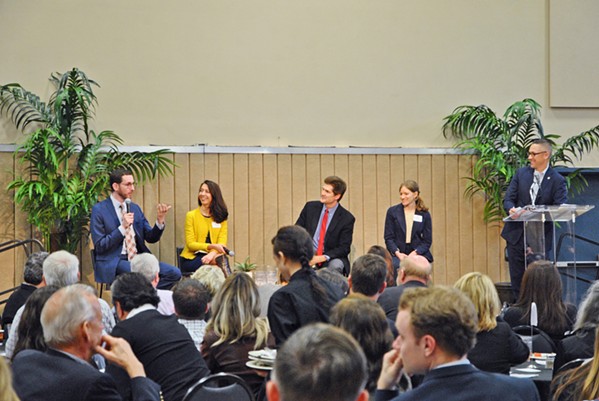 At the heart of the city of SLO's recent battles over housing development—on display with the contentious reviews of four-story mixed-use apartments along Foothill Boulevard, for instance—is friction between state laws that aim to speed up housing production and the community's desire to preserve local planning control.

Authored by Sen. Scott Wiener (D-San Francisco), SB 50 would effectively override local zoning and development standards for housing projects that are proposed in transit areas (near train stations and major bus stops) as well as in "jobs rich" areas—defined loosely as places that have "positive educational and economic outcomes for households of all income levels."

SB 50, which is still in legislative committees, has local control advocates up in arms—like the SLO County residents who stood protesting Sen. Wiener at his March 22 appearance at the summit hosted by the Housing Coalition of the Central Coast.

Wiener spoke about his bill to local officials and other summit attendees inside Grace Central Coast.

Wiener described SB 50 as both a bill and a tool "to spark hard conversations." Some of its details: Housing projects that are proposed within a quarter mile of transit lines couldn't be restricted to under 55 feet in height, and within a half mile, 45 feet. It also limits the extent to which cities can regulate the densities of such projects and their parking requirements. "Jobs rich" areas would face these changes as well, and it would allow developers to build multi-family projects in single-family neighborhoods.

"It's time for the state to set some standards, to actually have rules in place," Wiener said. "Right now, until very recently, we essentially had few or no rules around housing, and what that means is every project is a war in every community."

After his talk, Wiener joined a panel of housing experts to field questions from attendees and SLO County Administrative Officer Wade Horton about the issue. Answering a question about the need for new infrastructure (water, roads, etc.) to support housing, a noted obstacle to SLO County's growth, Wiener said communities shouldn't wait around for "perfect" infrastructure conditions.

"Unless you are building a planned community from scratch, you're never going to build infrastructure and housing at exactly the same time," he said. "When you build the housing, the infrastructure will follow."

Local residents who oppose Wiener's bill, and the prior legislation that's spawned recent development battles, argue that the state's top-down approach will result in poorly planned communities as well as an unsolved housing crisis.

Allan Cooper, a longtime member of the Save Our Downtown organization in SLO, who organized the March 22 protest, told New Times he believes that measures like rent control are more promising to improving affordability than the rush for more supply.

"What we're basically saying is [SB 50] is kind of a wolf in sheep's clothing," Cooper said. "It's pretending to address the issue of affordable housing but it's a sweetheart deal for the development industry."

Cooper said what concerns him most about SB 50 is whether SLO would qualify as a "jobs rich" area.

"To the extent that we are, the whole city is vulnerable to being built up," he said. Δ