Growing up in a half-American and half-Peruvian family, Los Osos resident Sandra Knapp was raised speaking both Spanish and English.

Knowing both languages allowed Knapp to communicate with her older relatives and better understand her family's colliding cultures. As an adult, Knapp was able to care for her Spanish-speaking grandmother through her battle with Alzheimer's, a unique chance to help someone who had done so much for her as a child. 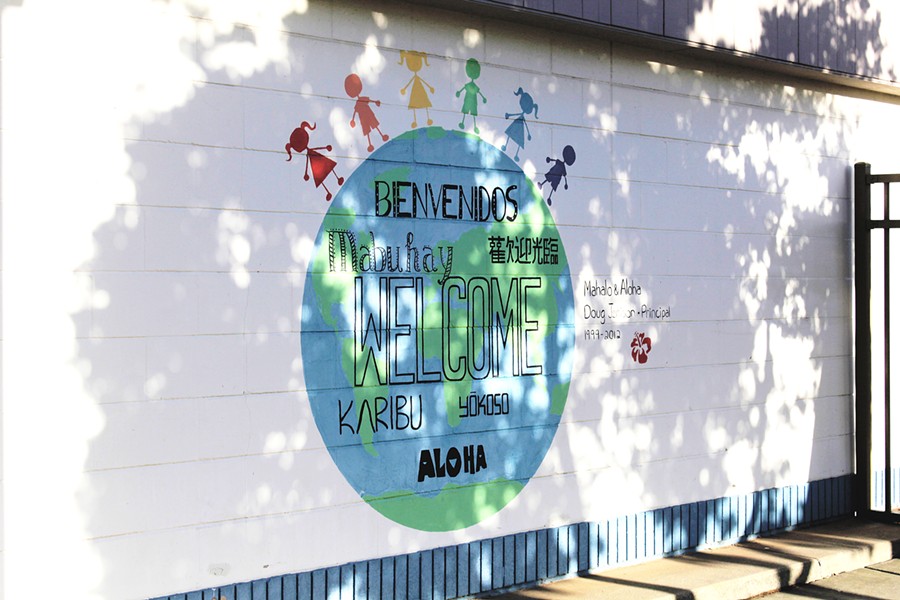 But now Knapp's own daughter, a first grader at Monarch Grove Elementary School, is losing her capacity to communicate with her own Spanish-speaking relatives.

"Within two weeks of her being at Monarch Grove, she went from fully speaking Spanish at home with me to having it become a fight," Knapp said at a San Luis Coastal Unified School District meeting on Sept. 12. There, the board of education discussed a proposed bilingual education program at Baywood Elementary School, an area district officials say has been underserved despite the community's budding interest in dual-immersion.

Knapp said at the meeting that since entering school, it's been a struggle to get her daughter to speak Spanish. But after a recent summer trip to Peru, "the fight was over," and she was back to speaking Spanish.

"Now, we're back in Los Osos, and she's in the first grade and the fight is up again," Knapp said. "I don't know what else to say other than please don't miss this opportunity."

The board heeded those words at another meeting on Sept. 17, when its members voted unanimously to implement a dual-immersion language program at Baywood Elementary School, which will be phased in on a year-by-year basis starting with the kindergarten class of 2020-21. The project is estimated to cost more than $140,000 a year for a few years during and after implementation.

Although nothing about the program is set in stone, San Luis Coastal Superintendent Eric Prater said students enrolled in the Baywood dual-immersion program will learn through a 90/10 model, spending 90 percent of class time reading, writing, and speaking in Spanish during the first year, and 10 percent in English. English class time increases gradually each year until students spend equal time learning in each language.

For now, Prater said the plan is to keep Baywood a neighborhood school, meaning families living within the Baywood boundaries will automatically be enrolled in the program unless they opt out, a contentious component of the program.

Pacheco Elementary is San Luis Coastal's only school currently offering a Spanish-English dual-immersion program, and families who apply for the program are chosen through a lottery system, according to Dawn Addis, a San Luis Coastal teacher on special assignment. A number of the families applying to Pacheco each year live on the coast, Addis said at the meeting on Sept. 12, where she presented her research into the benefits, costs, and potential downsides of launching a two-way immersion program at Baywood.

According to Addis' report, there are 62 students on this year's waitlist—students whose families applied to Pacheco but weren't chosen. About 18 percent of those waitlisted students live on the coast, and about 25 percent of Pacheco's student population, or 144 students, commute to the school in San Luis Obispo from the coast. Ninety-eight of those students live in Los Osos.

With equity being a key district priority, Addis said the board of education recently decided that offering a bilingual education program on the coast might even the playing field while also opening up some slots at Pacheco that would normally be filled by coastal kids.

"The bottom line is that, no, there isn't equitable access in town," Addis said at the Sept. 12 meeting. "If a student wants to access bilingual education and they live on the coast, they have to go to San Luis Obsipo."

That decision—to send a child to Pacheco or to stay at the neighborhood school—can be a difficult one for parents to make.

Several parents who spoke at the meeting said they struggled to decide which was more important: having their child stay in the community or a bilingual education. Some chose to send their children to Pacheco, facing fears about their kids not having friends in the neighborhood. Others chose Baywood, keeping their children close to home and among friends and family.

Several community members swore by bilingual education, echoing much of the data included in San Luis Coastal's report that illustrated benefits associated with learning two languages from a young age, including improved test scores in school and economic and job opportunities later in life.

Because planning for the bilingual education program is still in its earliest stages, San Luis Coastal hasn't mapped out many of the major components dictating how the program will be launched, developed, and run.

For the program to work at Baywood, the school would eventually need to be staffed with bilingual teachers, staff, and administrators at nearly every level. Although district officials repeatedly said at the meeting that no teachers will lose jobs throughout the transition, several parents worried that job transfers would be hard on some district employees.

Other parents were concerned that special education programs would no longer be offered at Baywood should it transition to a bilingual campus, although district staff say those courses will continue.

Most parents' reservations, though, surrounded enrollment: Would Baywood remain a neighborhood school, prioritizing students from the Los Osos area first, or would it become a choice school, allowing only families who apply and are accepted?

Both could lead to their own equity issues, according to parents like Sarah Flickinger, who has a fourth grader at Teach Elementary School in San Luis Obispo.

"Keeping it a neighborhood school is what makes it equitable," Flickinger said at the meeting.

"We saw the same thing happen with Pacheco," she said, "and I think that in order to preserve equity, we need to ensure that is not what occurs here."

But Flickinger said restricting a popular program like dual-immersion to a single neighborhood could present its own issues, like increased property values and gentrification.

Rick Mayfield, former principal of Pacheco and current director of learning and achievement for San Luis Coastal, said the district will be taking an in-depth look at all community concerns throughout the program's development.

There are countless routes the district could take in addressing the potential complications brought up by parents, and Mayfield said the positive impacts of bilingual education outweigh any possible side effects.

"We believe this will have a very positive impact on the community," he said. Δ