Next to the blue lunch tables at C.L. Smith Elementary School, boys and girls are picking fruits and vegetables, playing a produce hunt game (similar to an Easter egg hunt) and sampling local produce on Oct. 25. It's all part of San Luis Coastal Unified School District's participation in Collective Action Day.

Collective Action Day is a highlight of California Thursdays, a program that commits to serving fresh and locally prepared meals at public schools. On this day, participating school districts host school community events and join a statewide media campaign to celebrate the program's collective impact. 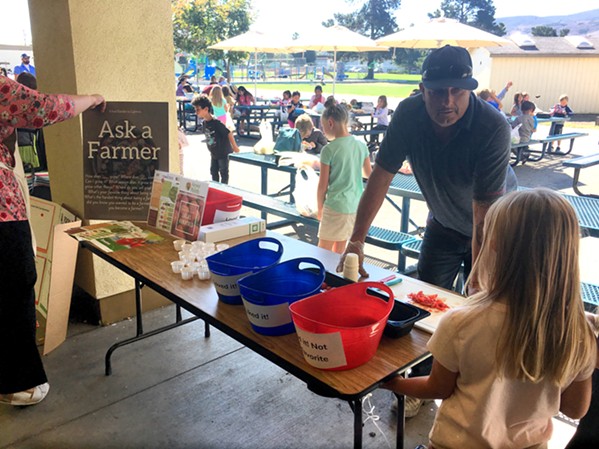 California Thursdays started as a pilot program with 15 school districts collaborating with the Center for Ecoliteracy in October 2014. According to the California Food For California Kids website, the program has grown to 89 districts across the state that enroll more than 2 million students and serve more than 334 million meals every year. The program has grown from serving fresh meals on Thursdays to doing it every school day.

"This exposure for them at such a young age is really important for them to become life-long healthy eaters, and really understand and appreciate their local food system," Primer says.

Primer points at students who are lined up at the farmers market section of the celebration, filling up bags with lettuce, tomatoes, pears, and apples.

"It's so nice to see them so excited about fresh foods," she says.

Javier Magana stands at a booth labeled "Ask a Farmer." He is the farmer at Red Barn Farm, which leases space from City Farm in San Luis Obispo. He has slices of his cherry tomatoes for students to try in paper sample cups.

Students come up to him and ask what he has, whether he's a farmer, and what it's like to be a farmer. Some students are shyer than others and decline to try the tomato because they already know that they don't like it.

"Sometimes it's hard to get kids to try certain fruits or vegetables because they're picky or don't know much about it. That's why I'm here to answer their questions," he says with a laugh.

Magana has been providing the district with produce for about two years now. He also provides the school with carrots, cucumbers, spinach, and boysenberries—when they're in season.

He is part of the larger initiative to create fresh food options for students locally and regionally.

"Millions of pounds of California foods are being served, which is really exciting for our economy and our kids," Primer says.

The California Thursday program does more than provide students with a fresh daily meal and keep the ingredients local. She says it helps fund the local and regional economy.

"Economists estimate that every $1 spent on regional food fosters $2.56 in regional economic activity," she says. "Every job created in the production of regional food can also lead to an addition of more than two new jobs."

The Paso Robles Police Department has been awarded a $130,100 grant from the California Office of Traffic Safety for a yearlong enforcement and public awareness program. The traffic study program is intended to educate the public on safe roadway habits and deter people from violating traffic laws or practicing other unsafe behaviors that lead to injuries and fatalities. The funds will go toward DUI checkpoints and saturation patrols, patrols at intersections with increased incidents of pedestrian and bike collisions, and probation supervision for high-risk DUI offenders. For more information, visit prcity.com. Δ