It’s not breaking news that California’s public schools have been hit hard in recent years. They’ve lost more than 200,000 teaching and administrative positions in the last four years, and slashing from Sacramento continues to plague school districts statewide.

But if local districts are faring pretty well given the hostile climate, San Luis Coastal Unified School District could be the crown jewel, helped to that status by high property tax revenue.

For the first time since the Great Recession, however, SLO Coastal has balanced its budget for the 2013-14 school year. It’s the only district in the county to do so, according to district superintendent Eric Prater.

“We haven’t had a balanced budget in years,” Prater, who came to the district in 2010, told New Times on a recent quiet foggy summer morning at the district’s administrative office. “It’s been a rough few years.”

Balancing the budget was the first in a long list of tasks before Prater and his staff. This year, the district will begin its transition into a new set of state-mandated educational standards—considered controversial by some—called “Common Core.” The new standards will place an emphasis on complex problem-solving and group students based on different comprehension levels.

For example, under the old standards, a standard math test may consist of 30 problems that require one form of calculation and offer four possible figures as possible answers. Under the new criteria, a test may contain just three word problems that require integration of a number of formulas, and provide no possible answers, requiring test takers to show their work to justify how they arrived at their conclusions.

The Core standards require students to argue and defend their answers, participate in teams, think on their feet, learn to adapt, and, as Prater said, even fail. By failing, the student learns the why as opposed to just the how.

The new standards came down the pipeline at the same time the district was developing its own Initiatives for Student Success, which sought to address the fact that some students weren’t grasping the material as well as others, and, as a result, were falling behind—and sometimes never recovering. Prater stressed that the new standards don’t change what the district was trying to accomplish, but rather support and align with what they were already doing.

“Public education has turned into this, ‘Well, some kids get it and some don’t,’” Prater said. “But Common Core is about testing your ability to work with a team, to think through a situation, to help them get it.“This is going to rock our world!” he added. 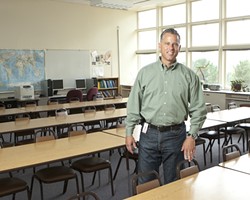 Of course, the new concept isn’t popular with everyone, namely parents who question why their child is grouped with others who may be categorized as having a lesser grasp on the curriculum. But Prater stressed that the new program allows children to achieve their way to higher-level groupings.

Another major change the district is undergoing lies in how administrators evaluate teachers’ performance. As a result of the latest round with the teachers union, which successfully negotiated salary and cost of living increases for its members, the district got something in return: an agreement to develop a comprehensive teacher evaluation program.

In previous years, Prater explained, teachers were graded as either  “satisfactory” or “not satisfactory.” Prater describes the new evaluation standards as “a professional, capital framework that aims to start a conversation about best practices.” The district ran a pilot version of the new program last year, and Prater said it was popular among both teachers and administrators.

“If we put great teachers in front of kids along with the new Core standards, the kids are going to learn like they’ve never learned before,” he said. “And the community is going to take notice.”

Ahead of these major changes and with the help of the sunnier budget situation, the district is able to fill pivotal positions at schools in the district for the 2013-14 school year.

At Laguna Middle School, for example, the district has hired John Calandro as its new principal and Scott Schalde as assistant principal. Calandro, a long-time SLO resident, is transferring from Santa Lucia Middle School, where he was principal. Schalde has been promoted from dean of students at San Luis Obispo High.

Carrie Trujillo is moving from Laguna to Los Osos Middle School as its new school secretary. The district is currently looking to fill Trujillo’s old position at Laguna.

After nearly a decade serving as the assistant principal at Laguna Middle School, the district has promoted Andy Marinello to principal of Pacific Beach High School.

One aspect of his new administrative team Prater likes to tout is that his entire district-level team is comprised of former principals, all bearing experience that will be invaluable to understanding each individual school’s needs.

On the administrative side, the district hired Diane Frost as its new executive director of Student Support Services.

As a result of the 2013-14 budget reductions, the district is also combining two previous positions: secondary director of learning and achievement and director of information services and technology. The new position—secondary director of learning, achievement, and innovation, will be filled by Kim McGrath, who will oversee middle and high school instructional programs and lead development of what Prater calls “innovative practices that align 21st Century skills.”

Ryan Pinkerton was selected as the district’s new assistant superintendent for Business Services following the retirement of Russell Miller. Pinkerton formerly served the district as a teacher, elementary and high school principal, and most recently as personnel director.

So Prater says he’s excited about the significant changes in his staff, but how does a robust district administration trickle down to the student?

“I believe the impact is significant, but it’s not always obvious,” Prater said. “It directs all the instructional coaches, the curriculum, the training assessments, and leads the principals, which in turn lead the teachers, which filters down to the child in the seat.”

Without a vigorous staff, you would essentially have principals operating off memos directly from Prater, who would essentially be on his own. But the recent additions and changes in the district ensure that Prater has all the help he needs to implement the new standards—and ensure that they’re working for the kids.

“We have a great team, our focus is strong, and I believe we’re going to knock the ball out of the park this year,” he concluded.

ALSO IN THIS SERIES: